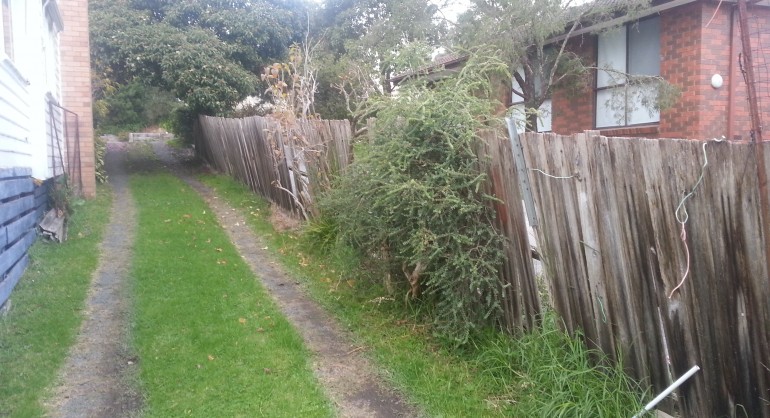 Demolishing the fence between our property and the set of 4 units next door turned out to be an ideal way of meeting our neighbours. 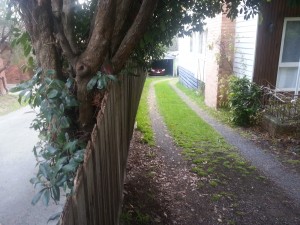 So squeezy! The old fence threatened to cut off our access to the garage.

After moving in, we discovered that driving a car down the side of the house to reach the garage was fraught with danger.  The fence leaned towards the house which restricted the available space.  More worryingly, it seemed to be on the verge of flopping over with one bad storm, spraying the driveway with splintered timber and assorted nails.

This fence had to go! 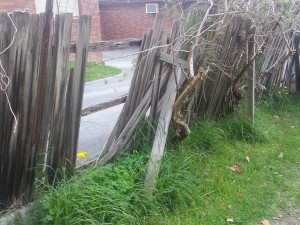 Missing palings, fallen palings and some palings held on by plants. The fence was a mess.

During the Queens’s Birthday long weekend, we contacted our neighbours to see how they felt about removing most of the fence and not replacing it in a hurry.  No sense in putting in a new fence before our construction was finished.  When we introduced ourselves, everyone was welcoming and supportive of the fence removal.  One neighbour provided us with the contact details for the two units which had landlords so we called them as well.

On Monday morning, the last person to give permission called so the project swung into action.  Our son, Ben, was visiting so he was immediately roped in.   Because Ben enjoys a bit of demolition, just like his Dad, it wasn’t hard to convince him to assist. 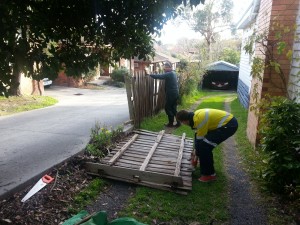 The fence seemed to know this was its time to go.  Just a small amount of force was all it took to push down section after section.  After leaning precariously for so long, the fence simply gave up and lay down. 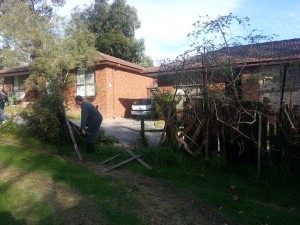 Harder to remove sections held up by plants.

The toughest part of the job proved to be removing sections where plants were holding up the fence.  Those plants weren’t going to give up without a fight. 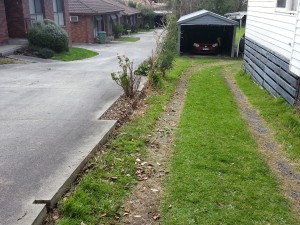 How much better does that look?  We took a moment to stand back and admire our handiwork.  Not only does the area look tidier, we could use the driveway without fear of scraping a car. 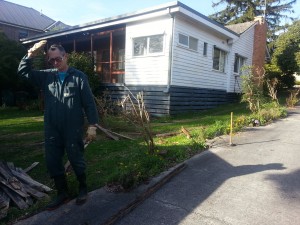 Not quite done yet! Found more fence to remove.

Now we were on a roll.  Inspecting the area near the garage highlighted that this was another section of fence begging to be demolished.  Most of it had already fallen against the garage and looked awful from the neighbours’ side.  We pressed on looking for more fence that could be quickly removed. 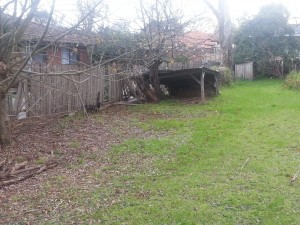 Lean to leaning on the fence was crying out for some attention.

After cleaning up behind the garage, there was enough time (and energy) left to take out the old lean to.  On closer inspection, it was difficult to know where the structure finished and where the fallen fence started.  How hard could it be to knock this lot down? 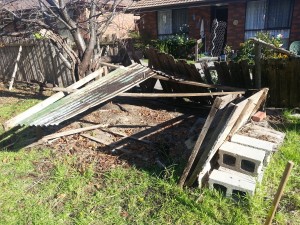 Flattening the lean to and old fence proved to be an easy job.

Knocking out the supports for the old structure meant the fence fell over at the same time.  Amongst the ruins, we discovered some garden tools discarded many years ago by the previous owner.  The most interesting was a cross-cut saw.  Since it seemed a pity to simply recycle the steel blade, the saw was advertised as a free give-away on Trash Nothing.  Within a couple of hours, an email arrived and the saw was gone within days.  Not sure why anybody would want a rusty cross-cut saw but apparently it has gone to a better place. 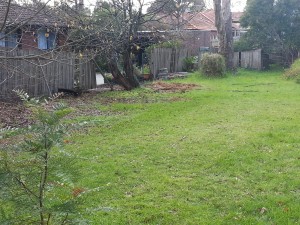 And then there was nothing left of the lean to.

Once again, a good result.  The area looked so much tidier.  There was another old shed and more damaged fence, but that was it for the day.  Ben is  highly suspicious about getting involved in further fence removal during his next visit.  Of course, he should be wary.  That’s quite likely to happen.

So what happened to the fence materials? 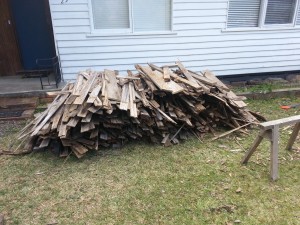 Stack o’ timber out the front of the house

As we went, the palings and support beams were stacked up in the front garden.  It’s amazing what you can do when it doesn’t really matter if the lawn gets damaged.  Since the front garden has a limited life span, we decided it was the ideal place to build the wood stack.  By the end of our demolition frenzy, this stack was much larger.  Fortunately, Libby had made contact with someone who needed firewood.  Over the last few days, the pile has shrunk as they collected a few trailer loads of free firewood.

All in all, a good day’s work.

Our neighbours are pleased with the result.  Best of all, we can easily say g’day since there is nothing between the properties.  Now that we know them, it’s quite natural to stop and chat whenever we see each other in the garden.  Removing the fence has made us into a small community with a shared border.