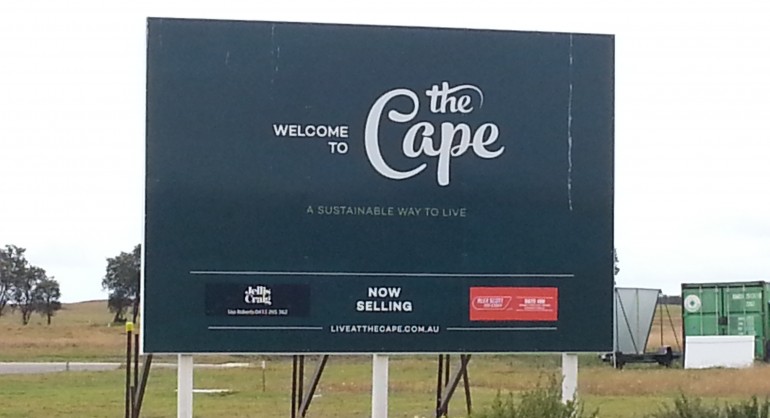 Live at the Cape

Since starting on our sustainable house project, we’ve discovered we certainly aren’t on our ‘Pat Malone’.  Two Australian projects, Live at the Cape and The Green Swing, are both active in this field.

A recent trip to Inverloch provided the ideal opportunity to pop over to Cape Paterson to see what was going on at The Cape development.

Live at the Cape development is underway. 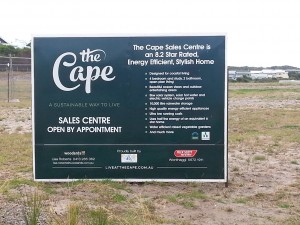 It’s early days at The Cape, but it’s clear the developers have a similar vision to ours, just on a grander scale.  They want to create an estate with over 200 dwellings that are attractive and sustainable, within a space that encourages a community feeling.  Tick, tick and tick as far as we are concerned. 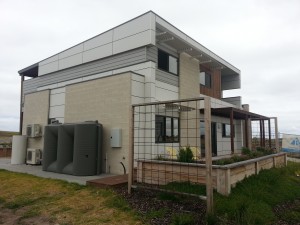 The first home on the development is being used to demonstrate the sustainability philosophy in action.  Passive design features are obvious when you know what to look for – thermal mass in concrete floors and rammed earth walls, north facing windows, windows and ceiling fans for natural air circulation, …  Resource conservation features are also evident – water tanks, energy efficient appliances, good insulation, … 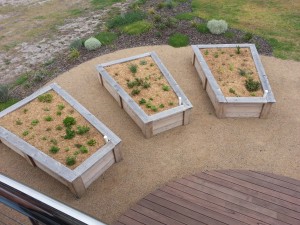 Although each house yard has room for a vegetable patch, future residents will also have access to a community garden where they will bond over the production of fruits and vegetables.

Another feature that was noticeable as we drove around the development was the open space between the house sites.  According to the brochures, about half the area is set aside for pathways, parks, wetlands and gardens.  It will create an open, green feel to the place when it’s finished.

It was interesting to see the ideas we have in common with Live at the Cape.  We’ll be watching with interest as the site continues to develop.

On the lookout for landscaping ideas.

One of the pleasures of staying at Inverloch is the chance to wander around the quiet streets.  There’s always something to catch your attention when strolling past the houses.

Is it the relaxed beach atmosphere that encourages the creative streak in the locals? 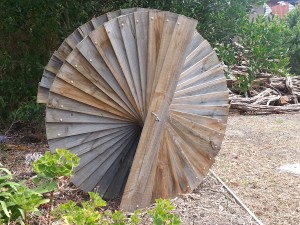 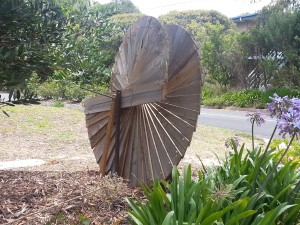 Put some fence palings on a spike and then fan them out to produce a dramatic garden ornament. 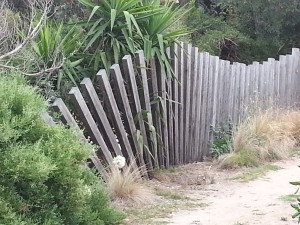 Who said that the uprights in an open fence had to be vertical?  Leaning the last few give the fence a sense of movement.  Simple but effective.

We’re planning to use David’s skills in landscaping to add interest to the gardens in our development.

Close encounter with an echidna.

While admiring the local architecture, we caught sight of an echidna out foraging for ants.  Although we were quiet, it detected our presence and ducked into the shrubbery. 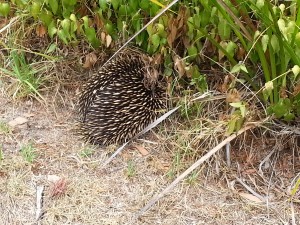 However, after a few minutes, we came back along the path to see the echidna push its way out of the undergrowth.

It must have decided we weren’t a threat as it then strolled right past us, snuffling at the ground and looking for ants. 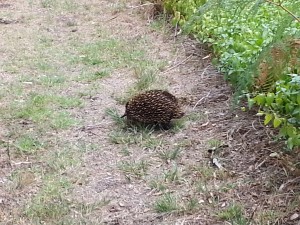 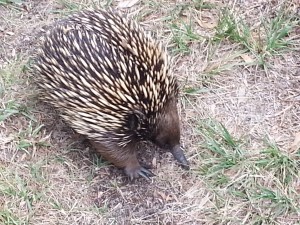 That was something special!

Meanwhile, back at home, the scrap metal has gone.

A big thank you to Jack for volunteering to help with removing the pile of scrap metal we had collected while tidying the back yard. 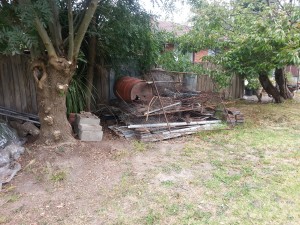 Some of the materials have gone to another home where they are going to be put to good use in a landscaping project.

Most of the metal was dropped off at the Council recycling depot.  Jack and I were careful to remove as much non-metal materials as we could before arriving at the depot.  We shouldn’t have worried so much.  Some of the items dumped in the bins could best be described as “may contain traces of metals”.

That was the last major project on the list for clearing out the back yard.  It’s now a blank slate.  We can easily identify where the new houses and landscaped gardens will be going.