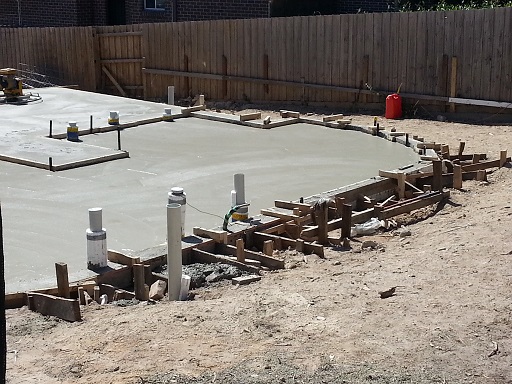 To me, pouring a concrete slab sounds like a simple thing to do.  I think of a sunny afternoon with workers in gumboots spreading concrete.  It seems straightforward if a little messy. Perhaps the trickiest thing is avoiding dips and bumps in the finished surface.

Well, how much do I know!  Pouring concrete for a house floor is the last step in a challenging process that requires skill and experience to complete successfully.  I learned a lot watching David and his crew in action. There is so much preparation to do. Along with the excitement of seeing our first home take shape, the last few weeks were very educational.

Gordon B. Hinckley said, “You can’t build a great building on a weak foundation.”  But a foundation’s strength is not the only measure of success. Given the time and effort put into the preparation, I know David believes you can’t build the right building on the wrong foundation.  Get the concrete slab layout correct and the rest of the construction slots into place exactly where it should be.

Why use a concrete slab as the floor? 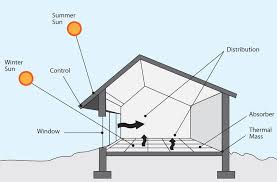 If a concrete slab is that much trouble, why did we want one as the floor in our home?  The short answer from Your Home is thermal mass. Concrete is good at storing heat (or coolth) and then releasing that energy.  Anyone who has walked into a cave on a hot day knows about thermal mass and coolth. There is a significant drop in air temperature because of the cooler rock in the underground cave.

During a winter’s day, the concrete floor absorbs energy streaming in from the north-facing windows.  At night, the floor slowly releases this energy to help maintain a comfortable temperature. Good insulation keeps the warmth inside the home.  Next day, the sun replenishes the energy in the slab. Think of it as nature’s very own heating system.

In summer, eaves above the windows prevent sunlight from hitting the floor so it doesn’t get warm.  Now the aim is to protect the coolth in the slab. The home’s insulation prevents heat getting inside so the slab keeps the interior cool.  At night, open windows circulate cooler air throughout the house to remove heat built up in the slab.

Dealing with the elephant in the room. 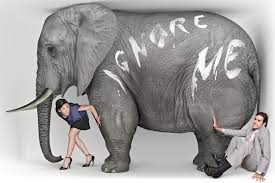 Using a concrete floor as a thermal mass can come with an environmental cost.  The elephant in the room is that 8% of global carbon pollution comes from making Portland cement, a key ingredient in concrete.  About half the carbon dioxide emitted comes from chemical reactions in the manufacturing process. Burning fossil fuels to run the process is another significant contributor.

Fortunately, it’s possible to buy concrete mixtures which use less Portland cement so they reduce the carbon footprint.  We’re using a special blend from VicMix which is designed to meet the Green Building Council of Australia guidelines for more sustainable concrete.

The most significant change to the concrete recipe is to replace over 40% of the Portland cement with materials such as fly ash or blast furnace slag.  Next, manufactured sand replaces natural sand. Instead of mining sand from rivers or dunes, this concrete uses manufactured sand made from rock quarrying waste materials.  Adding recycled water completes the recipe.

VicMix’s concrete blend is good but it is possible to do even better.  Beyond Zero Emissions published a study which shows how to achieve zero carbon cement or even create cement products that act as a carbon sink.  At a recent BZE Open Day, we asked if zero carbon cements were commercially available in Melbourne. Aurora Construction Materials supply a product called E-Crete which is based on geopolymer cement.

For the next two units, we’ll investigate using E-Crete for the concrete slab.  When it comes to using a concrete slab for thermal mass, perhaps it is possible to have your cake and eat it too.

Starting with the correct level. 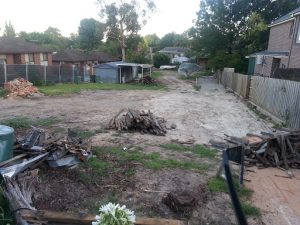 The Council is waiting for AusNet to remove the service pole on our footpath so they can complete their stormwater pipe installation.  Most of the onsite work is finished but the final section going out to the footpath is on hold. The coast was clear for us to start building the first home. 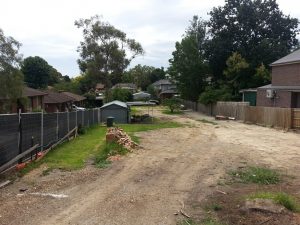 Our site drops away quite quickly from the footpath level.  We decided to keep the floor level similar to the level at the front of the block.  That allows easy access to the front door without steps.  Since the house is all one level, David began construction by raising the ground level at the back. 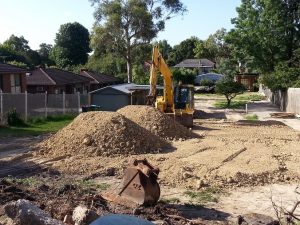 Truckloads of mudstone were delivered to the building site.  A decent sized excavator then moved the fill to the right position before it was compacted with a roller. 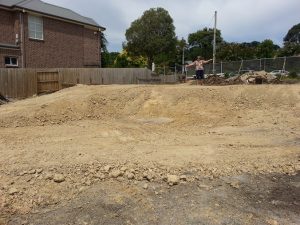 Supports for the concrete slab.

David had a level base for creating the home’s foundation, just like a sculptor with a raw chunk of marble.  Various bits and pieces are now carved away or shaped to create the finished product. 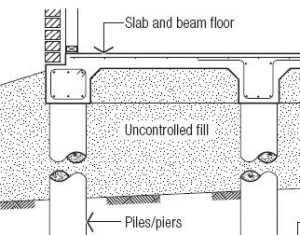 Our concrete slab is a “raft slab” design.  The slab has thickened sections (beams) which bear structural loads such as walls.  Concrete piers sit under the beams to provide extra support for the slab. 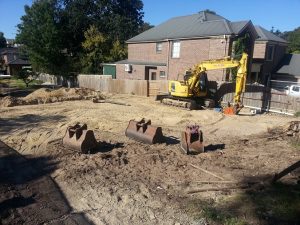 I discovered the excavator used by the crew working on the foundations is the Swiss Army Knife of digging machines.  Off came the bucket and on went the drill. 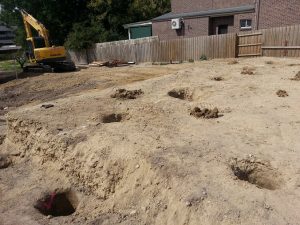 Next thing you know, the excavator is punching holes all over David’s site.  We went from a pristine surface to something that looks like craters on the moon. 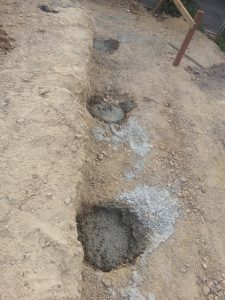 The holes didn’t stay empty for long.  They were filled to the brim with concrete. 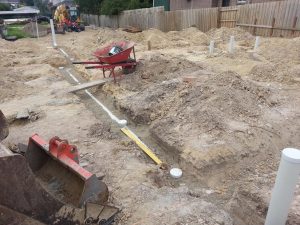 The plumbers were next in line to hack away at the compacted mudstone.  They dug trenches to make room for water service pipes – water collection from showers, laundry, toilet, etc. 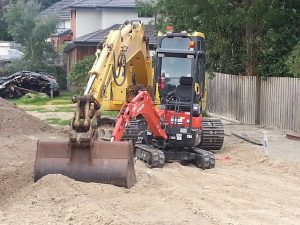 They brought their own excavator to make quick work of digging trenches.  Apparently, small excavators can get scared if left by themselves overnight so the plumbers arranged a cuddle from the larger machine. 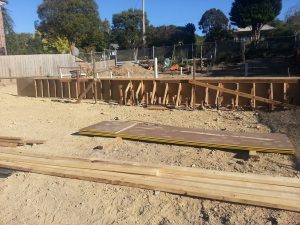 While every man and his dog carved through the mudstone fill, David built the formwork needed to contain the concrete.  In the spirit of reusing as much as possible, the many posts reinforcing the formwork were wood reclaimed from the old house.  It’s one of the stacks of timber that David stored at the back of the property. 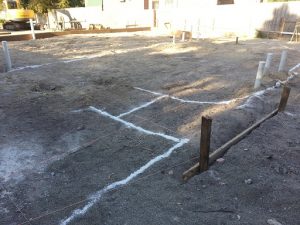 For the first time, we saw the outline of the house and walked around “inside”. 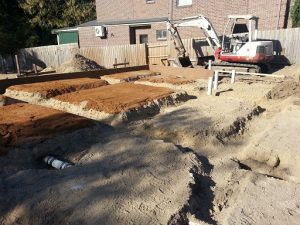 Once the plumbers installed their pipes, David dug the trenches for the concrete slab beams.  Everyone needed to be careful to avoid cutting through one of the pipes laid by the plumbers.  Doh!

You put insulation where?

At first it seems strange to even think about putting insulation under a thick layer of concrete. Surely that sounds like going a bit too far on the idea of a well-insulated home. According to the boffins at Your Home, to insulate or not to insulate is a question well worth asking.

A concrete slab sitting on the ground and covered by a house using passive heating/cooling principles has a similar temperature to the earth about 3 metres down.  A ground coupled slab (ie without insulation) is probably a good idea in locations with a mild climate. In places like Perth or coastal NSW, the floor feels cool in summer and is easily warmed in winter with sunlight.  However, for locations with cold winters, then the floor would probably be too cold in the middle of the year. Passive solar heating might not be enough to warm a floor in Melbourne that wasn’t insulated from the ground beneath. 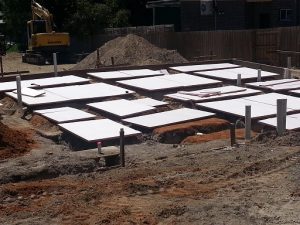 We followed the experts’ advice and specified slabs of Kingspan Kooltherm K3 under the slab.

One piece of advice we didn’t follow was insulating the edge of the concrete slab.  It’s possible for heat to leak out of the edge during winter and leak into the edge during summer.  In our case, we aren’t sure if enough of the slab is exposed to cause a heat leakage problem. But, time will tell.  This is something worth monitoring with a view to insulating the side of the slab for the next two homes we build.

Are we there yet?  Can we pour the concrete?  Not quite. Two more jobs to do. 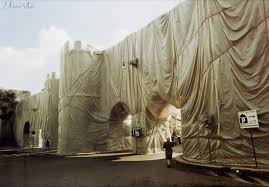 Heard about the artist Christo who was famous for wrapping monuments and landscapes? 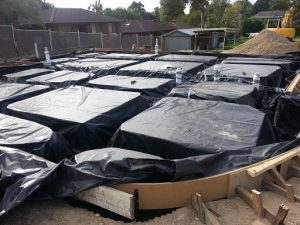 David needed to go all Christo on the foundations and wrap them entirely in polythene which acts as a vapour barrier. 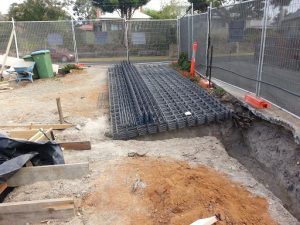 A stack of mesh arrived on site.  Surely that was more than the slab needed? 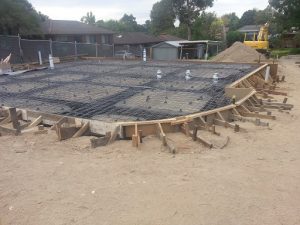 By the end, all the mesh was in place so the site was ready for pouring concrete.  By now, the attractive curves in David’s design are obvious.  We love them for adding character to the shape of the home. The excavator driver loved them for giving him something different to do.  At every other site, he digs in a boring straight line.

It was a Goldilock’s day for pouring the concrete slab; not too hot or too cold, not too wet or too dry.  However, Murphy’s Law did kick in with a predawn phone call from the concrete pumping contractor.  He wasn’t available due to a family emergency.  The pour would grind to a halt without a pump to move concrete from the trucks to the site.   After many frantic phone calls, David fortunately found a replacement.  A heartfelt thank you to Bravo Pumping for putting us back on track. 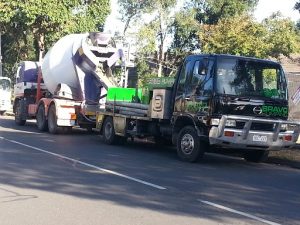 Concrete trucks arrived one after another, like clockwork, to unload into the pumping truck. 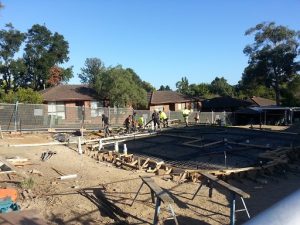 The mixture is pumped to the crew who fill the volume set by the formwork. 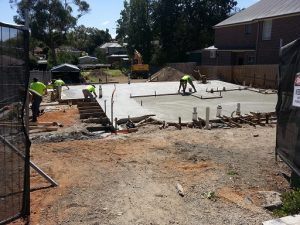 By the middle of the day, the team finishes both sections of the concrete slab.  The front half of the house is slightly lower than the back to allow for the timber flooring in the bedrooms.  I was surprised to find out the garage floor won’t be poured until much later.  Pouring it now might seem efficient but six months of unnecessary wear and tear wouldn’t be good for the surface. It’s better to finish most of the house construction and then work on the garage floor.

With the slab drying, building the frame comes next.  Our first home will soon become a three dimensional shape.