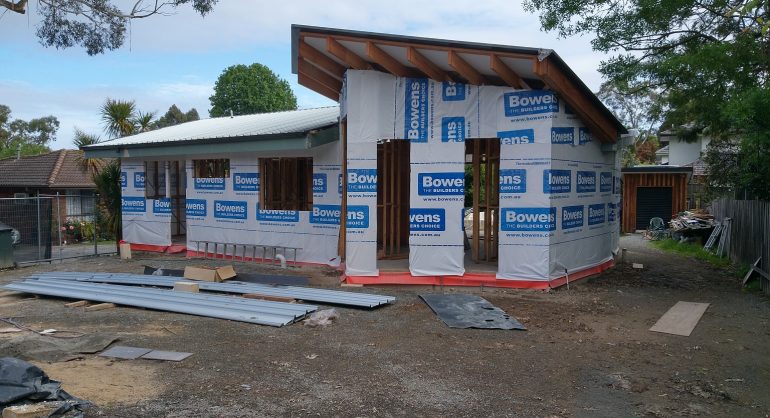 Regular readers are probably wondering about the lack of news on the third home.  What is happening? Wasn’t this design something a bit wild and crazy with the minimum number of right angles?  If that’s the case, what does the frame look like?

Recently we focused on getting the first home ready for Sustainable House Day and cladding the second one.  But, all is definitely not quiet down the back of the property. Ironically, the third home was the first one designed but ended up last on the construction schedule.  However, the advantage is that everyone had the chance to iron out wrinkles in their construction techniques when building the other two. Even David admits this one is a challenge to convert from a 2D drawing to a 3D frame.

Back in May, the Council finished their stormwater drainage project and vacated the back section of our block. We were also getting over the surprise of extra deep piles necessary for the third home’s foundation.

People might not remember, but it used to rain, really rain, in Melbourne.  Back in June, heavy showers regularly rolled over the city and drenched our worksite.  The crew struggled on with creating the foundation formwork, literally knee deep in mud. It was soggy, backbreaking work.

Everyone looked pleased when they laser-levelled the sand layer on top of the earthen beam sections.  One more task would finish the job – wrapping everything in plastic to protect the sand. Unfortunately, the weather forecast said heavy showers were on the way.  Rain is a major setback as it washes away sand and damages the precise levels.

Lots of sad faces as the crew contemplated redoing most of their work after the rain.

Quick thinking from David and Frank (Palacon) prevented tears before bedtime. A concrete cap on each sand pile rain-proofed the work done so far. Whew! Everyone looked much happier as the rain rolled in that afternoon.

Despite more rain, work continued on installing formwork to be ready for the concrete pour.

Slab is ready for the frame.

Another order of VicMix secondary cementitious material (SCM) concrete poured into the formwork to create the foundation for the third house.  It’s going to be a significant thermal mass given the number of trucks that arrived on site during the day.

The northern side of the slab is quite high compared to natural ground level.  The Council set the floor level based on their flooding model for this part of our property.  I took the opportunity to line the edge of the slab with sheets of leftover Kooltherm insulation. Waste not, want not! This material should reduce heat lost from the edge of the slab during Winter.

Pushing earth against the northern side of the slab reduces the difference between ground and floor levels. The dirt also provides another layer of insulation.

Looking at the slab’s layout, it’s obvious that David isn’t following a standard design based on rectangles. There’s even a curve or two for added interest.

At the end of a hard day’s work moving dirt around the slab, the big machine made sure the little one felt safe tucked in next to our second house.

With the slab in place, the team moved onto framing the structure.  It’s amazing to watch a stack of timber transformed into a frame, starting with the spine which divides the north and south roofs.

Long beams span the living room and kitchen so a crane arrived to swing them into place on top of the frame.

The northern roof line takes shape, looking more like a wing than a roof.

Something special is going on with the front entrance.  A soaring roofline covers a curved section with the front door tucked into the left side of the wall.  Just teasing – more details coming in a later post.

Capping the frame with the roofing material feels like a significant achievement.  I think the structure changes from an open air frame to something more like a house.

Extended eaves on the northern side are consistent with passive solar design principles.

For most of the south side, installing the roof was relatively easy.  However, Gavin (Highland Plumbing & Heating) paused to think about how best to cover the entrance hall.

After plenty of time spent wandering around the roof and taking measurements, Gavin added the finishing touches.  He took a few pictures to add to his “top ten roofing challenges” file.

Standing on top of the first house, looking back over the other two, gives an excellent view of the roof geometries.  The shapes used by David and his choice of materials are dramatically different to the standard suburban house.

Next item – windows and doors.

While the crew worked on the foundations and frame, Libby and I weren’t resting on our laurels.  We were busy organising windows and doors as the next item on the to-do list.

I’ll show you the result of our efforts in a future blog post.