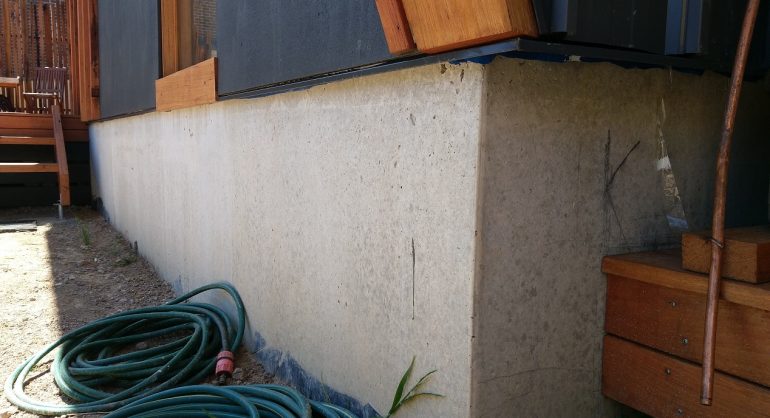 David, our builder, raised his eyebrows during a meeting when I mentioned insulating the concrete slab edge.  I could see him wondering what I’d been reading lately. My interest in the topic started after seeing the exposed sections of concrete slab at the back of the house.

Why insulate the slab edge?

I started my research at the Your Home website.  The authors stated that insulating the slab edge is “beneficial in all but the mildest climates.”

Positive Footprints gave an more details about the benefits.  On a really cold night in Melbourne, the air temperature near the exposed edge of a concrete slab drops as low as zero degrees. Getting down to 5 – 10 degrees isn’t uncommon.  The concern is the temperature difference of up to 20 degrees between the edge of the concrete and surrounding air. This is a reasonable temperature drop which drives a decent flow of heat out of the slab.  Un-insulated sides act as a heat bridge, allowing stored thermal energy to bleed away into the atmosphere.

Currently, it’s not possible to quantify the heat loss and its impact on a home’s NatHERS Star rating.  The software ignores this factor, although there are rumours of an upgrade being released in 2019.

Slab edge insulation could be the missing link in home insulation. With insulation in the walls, ceiling and under the slab, should we insulate the sides of the slab as well?

Adding this extra insulation may not be standard practice, but it does happen.  Habitech Systems show how they routinely insulate the sides of slabs in their projects.

The Your Home website provides a diagram for insulating the edge while maintaining a termite barrier.

Renew published a detailed article explaining the rationale for edge insulation and a suggested method.  It’s essential to do this work during the form work construction.

Benefits come at a cost.

So, what’s the issue?  Why isn’t everyone doing this?  As David pointed out, there are costs that have to be balanced against the expected benefit. Insulating the slab edge requires more design, more insulation, more cladding for exposed sections, more labour, more time, …  More isn’t a problem if cost isn’t an issue.

The author of the Renew article suggested his installation method was quick to install with inexpensive materials. This cost wouldn’t take long to recoup if heat loss was costing hundreds of dollars per year to keep the interior at a comfortable temperature.

Positive Footprints considered the extra insulation was justified if the budget could accommodate the cost.  I detected some concern here. The installed cost wasn’t insignificant so the decision should not be taken lightly.

The Mullum Creek estate is a local development based on ambitious sustainable design principles.  Their website contains detailed concrete slab insulation specifications. In the fine print, there’s a note about “architectural detailing required to protect and conceal slab edge insulation can be challenging and expensive.”  The Design Committee encourages designers to investigate slab designs that avoid the issue entirely. It seems people working on the estate have encountered significant costs with this insulation issue.

What will we do?

David readily agreed in principle with insulating the side of the slab, particularly the exposed slab sections.  However, adding this work to the quote pushed the cost past our financial limit.

Was there an incentive to cut costs in other areas of the build to install slab edge insulation? What are the likely costs for losing heat from an exposed slab? If heating is required, we use a super efficient heat pump powered by electricity. For much of the time, the electrical demand is met with solar energy (solar panels + battery). That significantly reduces the cost of replacing heat lost through the slab edge. With enough sunshine, the required electricity is free.

Let’s not ignore the issue though.  We discussed low cost alternatives to reduce heat loss through the slab edge.

Soil already covers the slab edge at the front of the house because the land slopes away from the street.  The slab for Unit 1 cuts into the earth, leaving a thin line of exposed concrete. Here the edge sees the seasonal temperature variations in the layer of soil/clay rather than the air.

For exposed concrete, we’re using landscaping to reduce the heat transfer. Piling rock and soil in a garden bed alongside the wall covers the concrete, except for a gap to allow for termite inspection. Indigenous plants in the bed will hold the soil in place.

Decking prevents access to the exposed concrete at the rear of the house. Creating a garden bed around the deck’s perimeter should reduce the flow of cold air reaching the concrete.

In an ideal world.

I suspect slab edge insulation would happen in a parallel universe where our parallel selves didn’t have a budget.  It makes sense that a slab insulated underneath and at the sides is a top of the range thermal mass.

Are the houses we’re building the “greenest” design without edge insulation?  No, but they are as “green” as we can afford to build them, given all the other features we’ve included.

We made our decision based on the available information and moved on. I’m sure most sustainable home designers have features they wanted to include but couldn’t. Maybe next time?