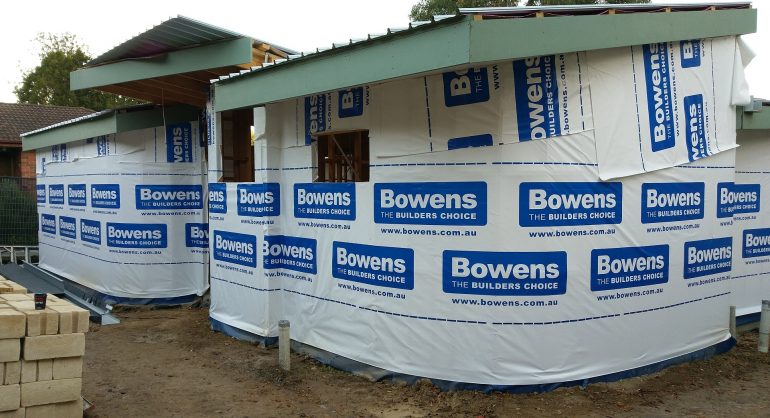 While looking around our worksite recently, I took the opportunity to pause and look at the big picture.  We’ve reached that exciting point where something is happening on all three sites. Time to share news about our progress.

Living next door to the Unit 2 site means we can easily see the progress of the build, just by looking out the kitchen window.  It’s like watching a Grand Designs episode on a giant TV screen.

Soon after the Zincalume roofing went onto the frame, David and the team wrapped the building.  Wrapping accentuates the curved walls on the front of Unit 2. It also blocks our view of the rest of the worksite.  Now we have to visit after-hours to see what’s happening inside the Unit and on the other side.

Out the back, the large glazed areas stand in stark contrast to the membrane.  I was surprised at how suddenly the frame morphed into a recognisable house.

Keeping the weather out of the structure allowed the electricians to run internal wiring. Although it appears a mad spider ran trails of web everywhere, there is a plan for lights, switches, power points, etc.

Not to be outdone, the plumbers took the opportunity to install pipes in the wall spaces.  Decisions about plumbing fixture locations were easier this time because we essentially copied the Unit 1 design.  No sense in reinventing the wheel given the Unit 1 bathrooms and kitchen turned out so well.

The concrete polisher arrived right after the plumbers and electricians finished.  He ground away at the special low-carbon concrete mix. Since the concrete contains all sorts of reclaimed materials, it’s always a lucky dip for the final appearance.

I think this floor has even more character than Unit 1.  There are granite and bluestone flecks, along with quartz and some brownish coloured rock. As an added bonus, the floor didn’t need as much time and energy to expose the aggregate.

After the experience of Unit 1 and 2 foundations, I thought Unit 3 would be more of the same.  Little did everyone know about the surprise in store for us.

Things looked a tad untidy at the start with mounds of fill to relocate and compact to the correct level.  Bits and pieces like the old tree stump were piled up, waiting to be cleared away.

With the site levelled, Frank began drilling the holes for the bored piers. Surprise!!. Drilling at this end of the site revealed an unwelcome underground feature.  There was an old creek bed down there. Going down the required 2 to 2.5 metres put the base of the piers in an unstable zone of wet clay and sand.  “Go deeper,” said David so that’s what Frank did. He swapped to his “commercial” grade drilling equipment and away they went, deeper and deeper.

Every hole on the path of the old creek bed is about 5 metres deep.  That’s way beyond the planned depth but necessary to ensure a stable foundation. With every deep, dark hole drilled, David became increasingly concerned that our foundation budget was about to blow out spectacularly.  That’s so much more drilling time and concrete for each hole. Fortunately, the creek bed isn’t too wide so the drilling depth decreased as the team moved away from the edge of the slab. Whew!  Sighs of relief all round.

Pouring the bored piers with several deliveries from Vic Mix capped off a terrific effort by all concerned.  I was impressed with the team’s willingness to postpone other work commitments in order to see this job through.

But, one more surprise.

I thought that was enough drama for Unit 3 foundations but apparently not. While David was preparing to start on the slab formwork, Council contractors arrived on site to make the final tie-in for the Scenic Avenue flood mitigation storm water drain upgrade.  Parking their excavator next to the slab location, and storing equipment on the earthworks, delayed our project. It’s a fine example of Murphy’s Law in action.  Who would have thought two completely separate multi-year projects would need the same patch of earth at the same time?

All going well, the deeper bore holes and storm water drain connection issues are behind us.  We’re ready to make more progress. Excavators have gathered, ready to dig trenches for the underground pipes and continue working on the slab foundations.

That’s a lot of work going on behind Unit 1. I wondered what the neighbours at the back of our property can see.

The hot, dry start to the year prevented any meaningful landscaping of the front garden in Unit 1.  However, we used the time to refine indigenous garden ideas with our landscaper (Dan). The aim is to create something to complement the house facade at an affordable cost.  Indigenous plants will feature heavily. I expect the potted eucalyptus trees waiting patiently at the back of Unit 1 are looking forward to being released from their confinement.

Now that the weather is cooler and slightly wetter, I’m hoping to report some landscaping progress in the near future. Waiting for the right time to start hasn’t been a hardship as we enjoy the comforts of Unit 1 in the meantime.