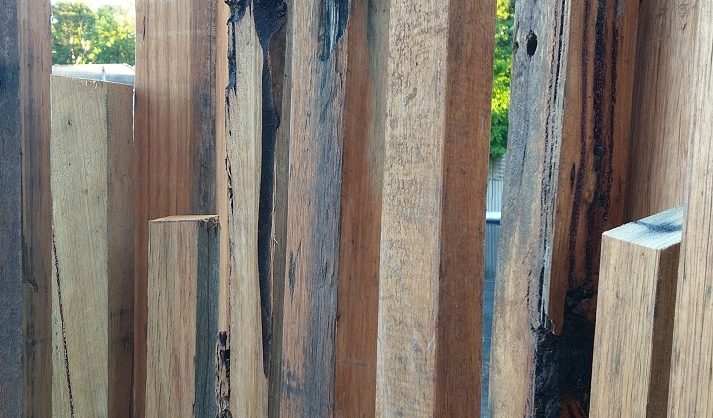 With his commitment to sustainable practices, David has a knack for using materials that others might consider wastes from the building process.  An excellent example is the way he modified the design of the deck at the back of Unit 1. While building the structure, David suggested adding a privacy screen on one side.  After sharing his idea, he announced, “I’ve got a stack of offcuts which will do the trick.”

Deck made from sustainable timber.

Before starting the deck, David made it clear he wasn’t using the popular choice of merbau decking.  Until he pointed out the issues, I didn’t realise how much Australian housing projects were affecting forests in Papua New Guinea and South East  Asia. There are two reasons for not using
merbau in this build. It’s considered an endangered species and cutting down mature trees in old growth forests is devastating entire ecosystems.  Also, shipping the wood all the way from Asia doesn’t make sense when there are more sustainable, local alternatives. I’m surprised merbau is still readily available given the environmental concerns.

Our decking is made from Yellow Stringy Bark.  It can be sourced from Victorian and NSW plantations so the planks doesn’t travel anywhere near as far as merbau to get to the site.

Work started with drilling holes and pouring concrete for foundations.

The deck takes shape once the timber is nailed in position.

We need a screen.

While looking through the sliding door leading to the deck one day, David suggested a screen would enhance the structure.  Staring at the neighbour’s house, with its brown brick wall, wasn’t anyone’s idea of a scenic view.

Using a screen was also a more interesting alternative to a safety fence along the high side of the deck.

Use reclaimed timber offcuts for the screen.

How many lives does timber have on our site?  Apparently more than one. During the construction, decent offcuts from the reclaimed timber used in the cladding were stacked at the back of the site.  As soon as David came up with the idea of a deck screen, he knew exactly what to do with these offcuts.

A curved corner and angled supports give a hint of the final design.  Move along folks, no rectangles to see here! Something more organic is happening.

The screen is nearly finished.

Keeping the offcuts’ character is an important design feature.  Different widths, lengths and end cuts proudly display the history of the timber on our site.  “Hey,” they’re saying, “we might be old bits and pieces, but look at what we can do when you stand us in a row.”

These timber slats do a great job of screening the brick wall.  Looking out the sliding door instantly became a more pleasurable experience.

I like the way the structure hugs the deck, dropping away in a series of shorter slats.  This shape provides a welcoming nook at the end of the deck, just the right size for a small table and chairs.  I can see the space being used more often due to the privacy screen.

David’s ideas gave us a practical, quirky screen from a jumble of offcuts.  I suspect this is only the first of many ideas about using leftovers. There are rumours about spare timbers from the letterbox structure finding their way onto the nearby curved wall cladding.  Can’t wait!