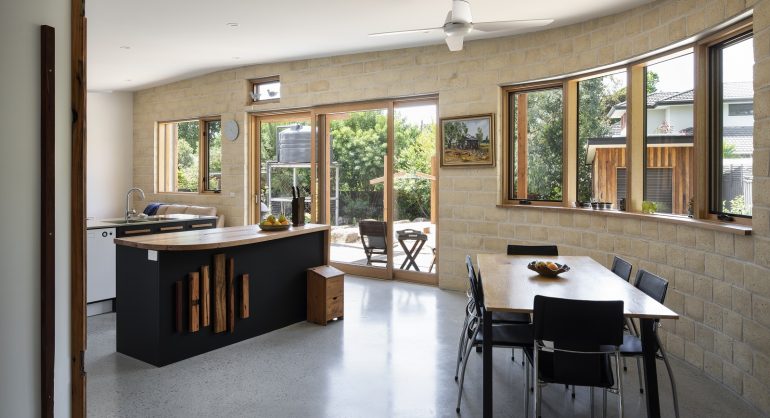 Although I haven’t posted in a while, the third home is now much more than a framework.  COVID19 slowed the team’s pace after the cladding, but they soldiered on to finish the 23B interior.  We’ve since moved into this home, our final destination, and are feeling fortunate to be living in such a beautiful, comfortable home.

Here is a look at what happened inside the walls of our third home.

Messy start to 23B interior.

After watching construction of the first two houses, I knew the chaos at the start of working on the internals was part of the process.

Installing insulation and laying Timbercrete blocks is a messy process.  Fortunately, both teams regularly tidied up after themselves so things didn’t get too far out of hand.

Libby spent a chunk of her spare time mopping the concrete floor to remove dirt and stains.  Once the polisher gets to work, marks are there forever.  I had the feeling this was a never ending job.  As soon as Libby finished, somebody else would track dirt through the house so she had to start again.

Initial polishing looked good with a variety of aggregate textures and colours coming through.  However, there was a problem.  Something unexpected happened early in the curing process.  Parts of the floor were pockmarked.  Rather than spot fill the small pits, the polisher coated the entire floor with a levelling compound and then smoothed the surface.

Where does everything go?

Once the tradies finished, the 23B interior started to reveal its character.  We had the chance to imagine the look of the finished kitchen and dining room area.

Libby wanted an attractive, functional kitchen design to be the centrepiece of the family area.  She and David tossed around ideas for months, going over various permutations to get it just right.

We spent quite a while moving objects around the dining area to ensure the nearby kitchen benches were in the correct position. That chair isn’t a chair, it’s the edge of the pantry. Those polystyrene blocks are a table.

The preparation paid off.

There was a sigh of relief when the two benches arrived.  For this kitchen, Libby wanted an archipelago of benches, instead of one long island bench.  Two benches give the same amount of work space but avoid the problem of one bench splitting the kitchen area into two separate sections.  People working in the kitchen area naturally flow around the benches.

A corridor runs behind the kitchen, providing the ideal location for cupboard storage space.  Despite downsizing, storage space is still important.  Otherwise, where would we put items like the slow cooker and stacks of recipe books?  They might not be used all that often, but they can’t be tucked away in some hard to reach dark corner.

Of course, there were curves in the design.  A curve flows out of the air-lock entrance and is mirrored by another curve on the back of the kitchen pantry. On the left, you can see the study taking shape. This isn’t exactly a man cave, more like a quiet space for working on the computer.

Assembling the IKEA drawer sets for the walk-in robe proved to be an entertaining afternoon.  Unlike many of my previous constructions, I didn’t have bits left over so the drawers should work properly.

Kitchen and dining area feature in the 23B interior.

The finished kitchen is a work of art that Libby had dreamed about.  Two benches bracket the area with the cooktop and oven. The stainless steel benchtop is the workhorse of the pair as it contains the dishwasher. Most of our food preparation happens here as nobody is too concerned about spills and scratches (unlike the wood top).

A curved wall, walk-in pantry provides heaps of storage space on the left hand end.  Down the other end, the trusty fridge and freezer pigeon pair store the cold stuff.  Libby was never going to dispose of the freezer.  The Kelvinator is always chock a block with various fruits for jam making and useful leftover meals.

Looking in the other direction reveals the curved wall at the back of the dining area.  David and Matt shaped the window sill and steel frame such that the four Miglas windows appear to flow around the curve.  This window gives a panoramic view of the garden outside, particularly the bird bath where the Wattle Birds like to splash on a hot afternoon.

The Miglas folk are talking about getting some publicity photos for their catalogue because they are impressed with how David used their double-glazed windows in his design.

Standouts in the kitchen.

Libby’s favourite part of the kitchen is actually tucked away at the side of the cooktop.  It’s a fold-away door that opens to reveal her mixer, toaster, etc.  She simply slides the appliance out of the hidden cupboard whenever it’s required.  There’s no need to lift or lower anything.  That’s important with the mixer because KitchenMaid makes a solid device.  That thing is heavy!

David’s creative juices were flowing when he designed the wooden benchtop.  Could anyone else decide to include a Red Gum house stump in a waterfall benchtop, then work out how to do so?  I think not.  This beautiful stump from the old house lives on as a unique statement in the kitchen.

A few bits and pieces of leftover timber add interest to the side of the benchtop.

Speaking of bits and pieces, David saw an opportunity to replace the standard handles with hand-made wooden ones.  These handles add instant interest to both the white and black panels.  The fact they came out of the old house is another historical connection with the original property.  Building in a sustainable manner can produce something far more beautiful than new items punched out of a factory.

Slats on the curved pantry wall and cupboard handles pop against the white background in the corridor behind the kitchen.

What about other rooms?

Yes, there’s more to the 23B interior than the kitchen.  An alcove leads to the main bedroom which is located next to the family area.  It’s a clever way of connecting the two rooms with space for a linen cupboard right where you need it.

Unlike all the other bedrooms in the three homes, our bedroom has a polished concrete floor.  We decided not to cover it with tram depot floorboards because the room is on the northern side of the house.  Sunlight comes through the windows in Winter, directly warming the floor and Timbercrete walls.

Of course, the ensuite has a free-standing reclaimed timber vanity unit.  The combination of a mirror and high window in this room creates fascinating views.  My personal favourite is looking in the mirror at night to see the Moon shining through the window above and behind me.

Over in the second bedroom, timber floorboards contrast with the black built-in robe doors.

Blue mosaic tiles left over from the curved section of a wall in a bathroom in 23A provide a splash of colour in our main bathroom.

What’s this?  The third home has a full size laundry instead of a European laundry.  We didn’t insist on a larger space.  It’s more that laying out the other rooms in this house design produced a space that would be a standard laundry.

Inside the storage cupboards, Libby has a surprise.  The laundry backs onto our ensuite.  That prompted Libby to think about the easiest way to get washing from the ensuite to the laundry.  Would we have to walk a basket through the house to get from one room to the other?  Nope!  David agreed to install a “porthole” in the back of the cupboard.  At the end of the day, dirty clothes go through the hole in the wall, behind the ensuite mirror, directly into the laundry basket sitting on a shelf in the laundry cupboard.

Airlock welcomes visitors to 23B interior.

Tucked behind the soaring Timbercrete walls at the front of the house is the airlock space. That’s not the only thing tucked away. Our front door is behind this wall and that confused a few arrivals.

On wet days, visitors can take advantage of the seat to remove their shoes before walking into the rest of the house.

Meanwhile, outside the house.

With the 23B interior organised, landscaping was the next job on the to-do list.  More on that next time.