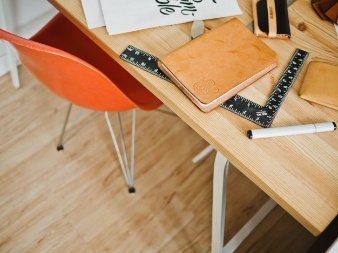 “My brain is fried,” announced David after we’d finished several hours of discussion about the floor plans of the three homes.

Our latest meeting was an important milestone in the project.

David and Ian had put together a set of draft floor plans that contained all the input from previous meetings and phone discussions.  The idea was to go through the drawings with a fine tooth comb and identify any changes.  After spending hours talking about what we wanted, everyone wanted to lock down a design.  This would be essential for the team to move into the Planning Permit phase.

Out came the coloured pens and away we went.  Hours later, the original drawings were covered in a rainbow of lines and shapes.  Each one represented an idea that had surfaced (or been discarded) as we worked out way through the homes.

The good news was that the modifications weren’t significant.  We hadn’t gone back to the drawing board with a total redesign, just played  around the edges to make the homes more functional.

David and Libby were particularly pleased with the revamped kitchen designs for Units 1 & 2.  They made optimum use of the available space through clever siting of the major items.  The work space will feel open and light filled with everything easily accessible.  Work benches will be arranged according to the “archipelago” layout, giving the room a unique character and plenty of space.  Natural shapes will allow residents to see benches as furniture to flow around, rather than obstacles for getting from one side of the room to the other.

The laundry in our home, Unit 3, was also finalised.  It has been the forgotten space for quite a while, with neither Libby or David happy with the various permutations. Libby indicated she was well pleased with the new layout.  Now all we need to do is to work out how to design and construct a drying cupboard in the allocated slot.  That will be where the magic happens later in the design.

From floor plans to elevations.

With the floor plans almost finalised, our design team is free to move onto the next exciting stage.  Time to fine tune the elevations.

Most of the window area will be concentrated on the northern side of the homes, in order to capture the warming winter sun.  Eaves will keep these windows in shade during summer.  Smaller windows will be used where appropriate on the other sides.  Interesting shapes are planned to provide sufficient light coming into the room and visual interest from the outside.

Wall claddings are going to be based on a combination of simple construction materials, along with feature areas using timber.

Cement sheeting is easy to install and provides a back drop for adding timber features. 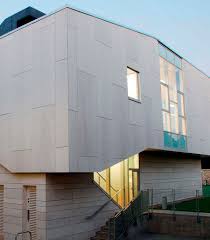 Steel roofing is another cladding which should work well on the western side of the homes.  It is durable and comes in a range of colours which can be used to complement the garden and wall features.

Board and batten is an option for curved walls and for places where the timber feature can align with the vertical lines in cement sheeting or steel cladding. 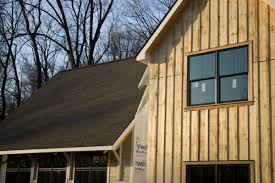 Of course, it wouldn’t be a house designed by David unless it had timber features that caught the eye.

Not saying that we’ll have something exactly the same as this in our designs, but the folk at Complete Home are showing what is possible.  Use lengths of timber in an interesting way and, voila!  Looks like something that David would have created.  It goes to show what can be done with cement sheeting as the backdrop to make the wooden “sculpture” stand out. 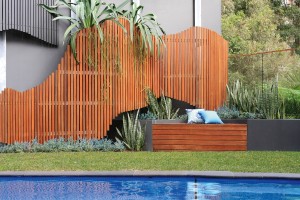 Curved, flowing lines will also be evident in the roof lines.  The aim is to have the homes settle into the indigenous gardens, echoing the shapes found in nature.  We want to avoid having angular shapes which impose themselves on the viewer’s eye.