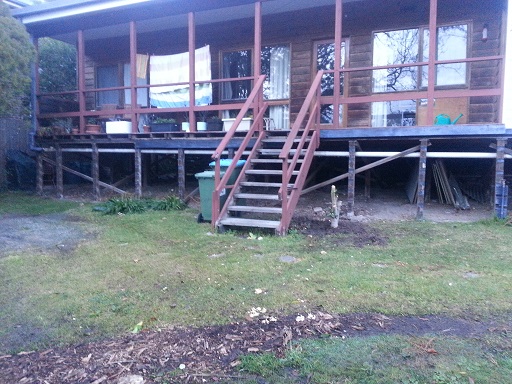 Getting towards the end of the planning permit approval process means thinking about the next stage in our project. It’s time to start preparing the site for Unit 1 construction and give clear access to Maroondah Council Engineers for their drainage works.  The old house must go!  Rather than put a bulldozer through it, we’ve decided that dismantling is the way to go.

Dismantling fits with our sustainable design philosophy of reusing and recycling wherever possible.

David predicts there is plenty of usable timber in the existing structure, probably worth several thousands of dollars.  Being a wood craftsman means he can’t wait to get his hands on these materials.  With the right attitude, many things can be brought back to life in the new dwellings.  Could the floorboards be cut into sections and used to create an attractive timber fence?  Are the weatherboards suitable for cladding?  Can the landscaping design use the house stumps?

Choosing to dismantle may not be the right choice for everyone, but it’s worth considering.  Before discussing the option with a builder, look for background information from publications such as the house deconstruction analysis from the NSW EPA.

Although the real dismantling starts in September, we have identified some simple jobs that could be done beforehand.  What better way to do them than with a family working bee?  An offer to keep everyone fed and watered during the day was enough to entice people here for a busy Saturday.

David needs an open space around the house to ensure he has a safe working area.  That meant the established shrubs had to go.  We tried to find a good home for them, but there’s no interest in transplanting large exotic shrubs (with the people we spoke to anyway). 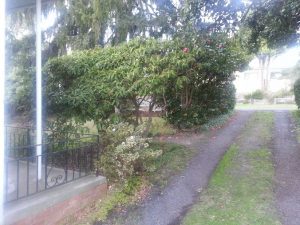 Jess replaced one of her gym sessions with a solid work-out on the pruning shears. 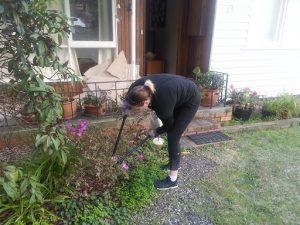 The front garden now looks quite bare with more to go when we have spare time.  Libby was another enthusiastic participant in this heroic pruning exercise by removing large limbs on the camellias. 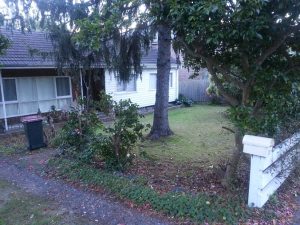 Taking out the shrubs didn’t mean they were going to waste.  The branches were fed through the shredder to make mulch for the back garden. 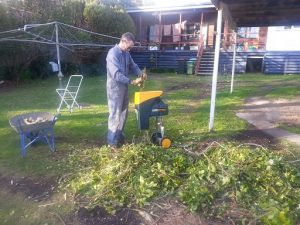 Reusing the base boards.

The biggest job for the day was removing the base boards around the house so we could remove the rubbish stored underneath.  Doing this job meant David and his crew wouldn’t waste their valuable time on something that unskilled labour (that’s us) could do. 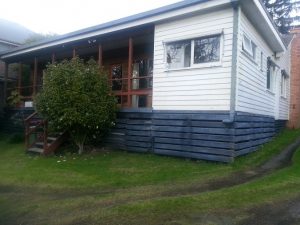 Ben and John developed a system for taking off the boards without any damage. 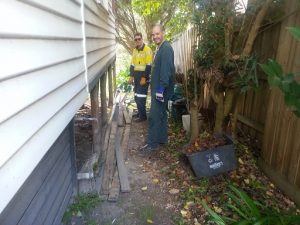 Next stop was the de-nailing station.  The operator was under strict instructions not to drop any nails on the ground where they might end up in the LEAF tyres.  Unpleasant consequences would follow if that happened.  Instead, the nails were collected and put into the recycling bin 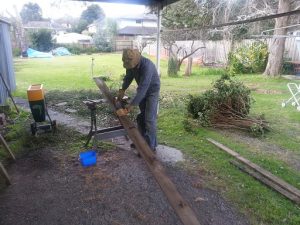 After nail removal, the boards were carefully stacked.  Underneath the peeling paint, most of the hardwood is in surprisingly good condition.  The boards are ready to be used for whatever David decides. 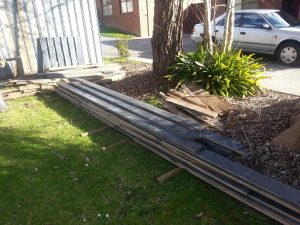 Dismantling the base boards cleared the way to the treasure trove under the house. 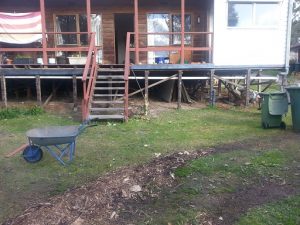 Ben and John were on a roll with their dismantling skills.  Taking off the metal blinds was’t a real challenge although the ants boiling out from under the weatherboards were a shock. 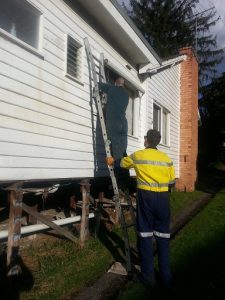 Out of sight is out of mind when it comes to what was under the house.  We were guilty of contributing to the pile by stashing the carpet and underlay removed from the rooms before we moved in.

As we dragged out the materials, everything was sorted into categories.  Small recyclables went straight into the recycling bin.  Larger metal items went into Jack’s trailer out the back for a future trip to the Council’s recycling depot.  The metal blinds off the house ended up in the trailer.  Useful wood and treated pine went to stacks near the base boards.  Dodgy wood went to a firewood stack.

There were some surprises amongst the things we discovered lurking in the dark.  A pair of oars and a fishing rod were the best finds of the day.  The rod seemed to go on forever – well about 5 metres anyway. 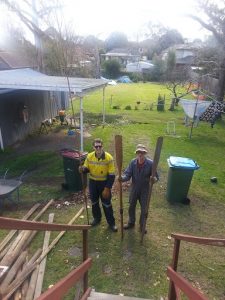 Anything we couldn’t reuse or recycle, like the rolls of carpet, went onto the footpath for a Council collection booked for the following week. 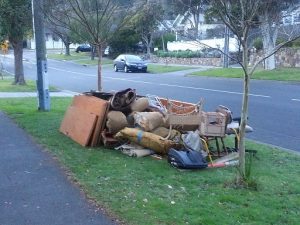 However, we quickly discovered that our neighbours had their own ideas about what might be reusable. The oars and rod disappeared within minutes.  The pile of materials became a meeting place.  As we brought items out we’d meet a neighbour fossicking through the pile.  Everyone was very polite as we chatted about what they could take.

By mid-week, the Council and neighbours had done their jobs so the footpath was back to normal. 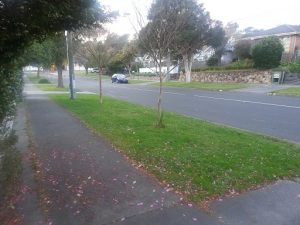 Honorable mention for the interior work.

There was some dismantling going on inside the house as well.

The biggest job was clearing out one of the bedrooms and removing the linoleum floor. Libby and Lauren taking the room back to the bare floorboards meant one more task off David’s to-do list.

Doors were also removed and put out with the hard waste.  We tried to find a new owner for the doors by advertising them for free on Gumtree, but didn’t have any luck.  I suppose you have to be lucky that somebody is looking for the particular items we are taking out of the house. We’ll keep trying as more useful items are removed.

Time to get serious.

Our time living in this house is drawing to an end.  Starting to take it apart was the signal that we have to move out.

After a lot of hard work, Libby was successful in find a rental property for us to live in while the first home is built on this site.  The rental has two important features – close to the site and central heating.  Warmth!  We are so looking forward to being more comfortable inside a house.  Next winter we won’t have to dress for arctic conditions because the inside is colder than the outside!