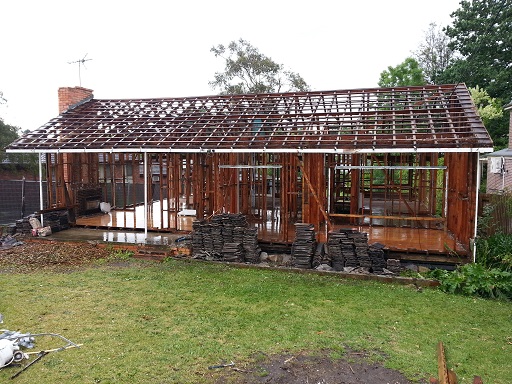 We spent most of 2017 working our way through a paperwork labyrinth with so many forms to complete!  Meeting after meeting with people who reviewed and approved the design documents.  Faint glimmers of hope that we might actually do something on the site were followed by more paperwork.  Finally we burst out into the light and we had the paperwork sorted.  Therefore, it was time to get on with dismantling the house and preparing the block for construction.

Although we had a demolition permit, we never intended to demolish the house using the standard method of putting a bulldozer through it.  There was too much valuable timber in the home to let it go to somebody else or simply truck it offsite to landfill. 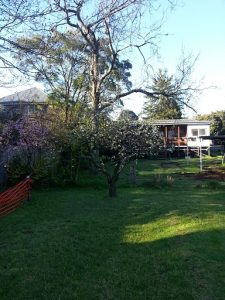 The dying Liquidambar tree has to go to make way for the new drainage pipes. 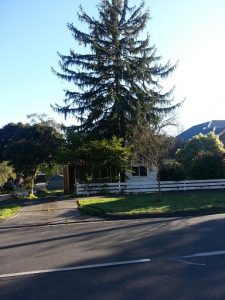 Mature exotic to be removed before dismantling starts

The first item on the to-do list was clearing vegetation from around the house and, unfortunately, this included the mature exotic pine at the front of the property.  We tried to think of ways to keep it but it was the wrong tree in the wrong spot.  The new garden for the first unit has several replacement indigenous canopy trees which will give the local native animals new homes after a few years.

We removed other vegetation to clear the new easement in preparation for the Council’s stormwater drainage upgrade project. 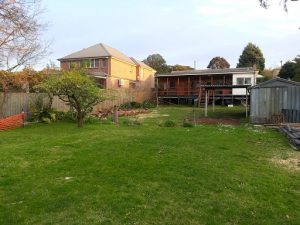 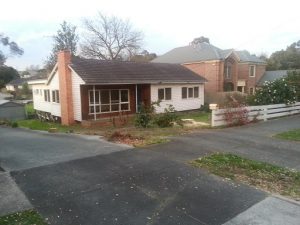 House exposed without the trees in the front garden.

In just two weeks, David and his crew dismantled the home by hand which looked like a home construction movie running backwards. 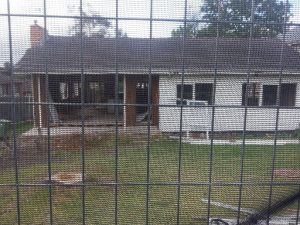 House is fenced off ready for dismantling to begin 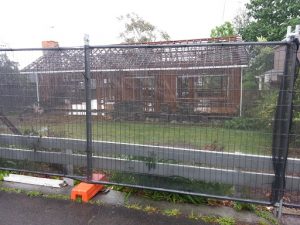 Dismantling is down to the bare bones

However, there were some surprises during the dismantling.  I’m sure the possum family living in the roof cavity took fright and moved out early in the process.  As the house came down, David discovered the chimney wasn’t attached to anything and it was just leaning against the wall.  He commented that building standards were not always better in the “good old days”. 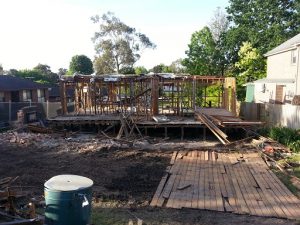 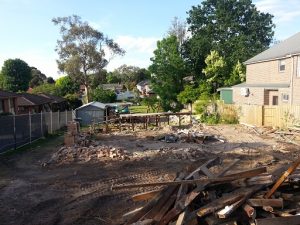 Dismantling finished apart from the back stairs.

Dismantling meant David had access to materials that he could re-use in the new build.  The timber in this 60’s home was the prize.  As the house came down, each piece of wood was sent to one of four stacks – furniture making, cladding, concreting formwork & landscaping or firewood for David’s heater.  Essentially, the house “exploded” into separate piles around the property.

People took up David’s offer to use materials in their projects. A stack of bricks and quite a few windows have second lives somewhere else.

David put everything else into a large skip which was trucked to a collection centre.  At the collection centre, they find a use for whatever they can.  Some examples include taking out metals for recycling and crushing bricks, roof tiles and concrete blocks for road base material.

Dismantling cleared the site for Council.

We didn’t appreciate how big a job this was going to be until the contractor arrived on site. 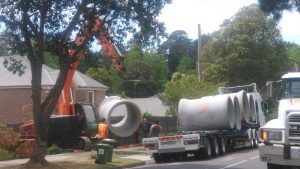 The first batch of pipes arrive on site 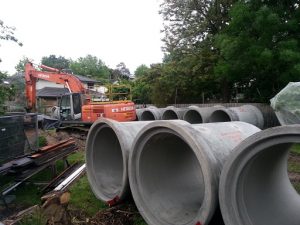 Getting crowded in the back garden.

Excavations began the day after all the pipes and machinery were on site. 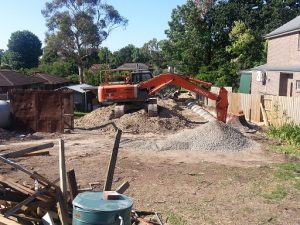 Excavating along the fence line and laying the pipes. 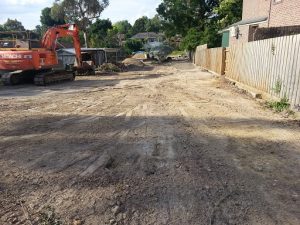 Due to the cracking pace, the contractor had the pipes underground within two weeks.

This is an important milestone in our project.  The block is ready for construction of the first home starting early in 2018.  As a result, we’re looking forward to seeing David and his crew getting into some serious building next year.

As a warm-up, David is building a small shed at the back of the property.  This provides a site office for the duration of the project.  In a couple of years the office reverts to just being our garden shed and, probably, a place Ben can use for a woodworking project or two.