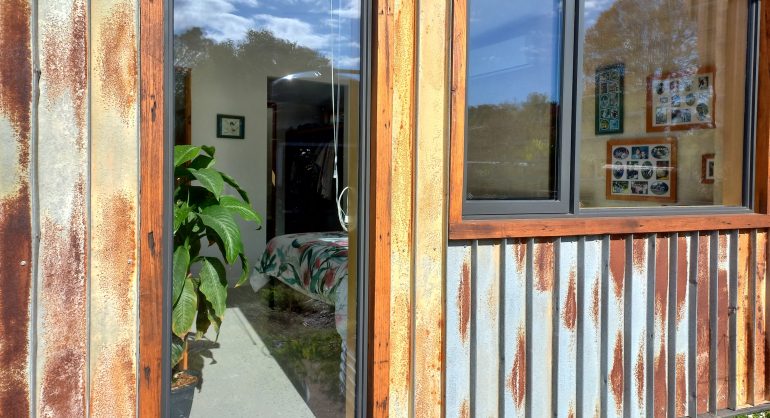 The downhill run into Winter continued during April.  By the end of the month, the house was ready to move into a blend of passive solar and active heating modes.  We’re almost ready to turn the air conditioner on for the first time in a while.

Our energy bill for the month flipped from a $4 credit in March to a net cost of $18.  Average daily electricity consumption hovered around the 11kWh mark.

Solar power production dropped again, down to 525kWh.  Even though production is about half what the panels produce in Summer, production still exceeded household demand.  We exported 230kWh to the grid.

Despite a run of warmish days in mid-April, the monthly average maximum and minimum temperatures are definitely on their way down.

The average daily maximum dropped from 25.4oC in March to 21oC.  The overnight minimum average also had a reasonable fall, going from 13.6oC to 11oC.

We also saw another reduction in the BOM solar exposure measurement.  The April average of 10 MJ/m2 is well short of March’s 15 MJ/m2

This temperature chart compares conditions in our living area (kitchen) with ambient temperatures on the north and south sides of the house.

Once again, there are a couple of kitchen temperature spikes, caused by the reasons discussed in the March report.  With the Sun lower in the sky, it’s warming a larger area of the thermal mass (concrete slab).  However, late Summer temperatures are lingering longer so we don’t yet need the extra passive heating.

Fortunately, Melbourne provides cool nights so we used natural air circulation to vent warm air.  We didn’t have to resort to the air conditioner.  Switching on the ceiling fans was enough to boost the air circulation after the warmest days.

During the colder, sunny days, we use sunlight coming through the large north facing windows to heat indoors.  Here you can see sunshine warming the concrete slab in our main bedroom.

The temperature graph shows we stayed below the recommended indoor summer temperature maximum of 27oC.

I didn’t see significant changes to the major electricity users.  Most of our energy goes to hot water, kitchen appliances and EV charging.

EV charging could be the one to watch for a cost impact in the next couple of months.  During Summer, there is plenty of excess solar power for charging.  We charged the car like you might charge a mobile phone.  Plug it in whenever we have the chance to top up the battery.

That’s not so easy to do in the Winter months when solar power production is much lower.  The 8kW array can’t meet household demand and charge an EV.  The back-up plan will be importing off-peak GreenPower from the grid at night.

Average daily production dropped below 20kWh.  The system struggled to get above 25kWh on a sunny day.

Weekly production is down to the 120kWh mark, the lowest since August 2021.

GreenPower imports edged up slightly from a total of 11kWh in March to 24kWh in April.  The jump happened because I topped up the battery twice in the month.

Less production meant less excess power so exports fell to 230kWh.  That’s not surprising and it won’t get better for a while.

The feed-in tariff helped but didn’t cover the $33 grid connection cost and our small amount of importing.  The April bill came to $18, up from a $4 credit in March.

Moving beyond the peak solar power production season is starting to affect these averages.

Both the electricity imported and energy cost daily averages have plateaued.  With the impending production shortfall, they are likely to start rising.

The electricity export average is falling.  Given we are heading towards the June/July production minimum, this figure will drop again next month.

Looking ahead to May

Given the cold start to May, we’re already using active heating during periods of cloudy days and cold nights.

Comfort-wise, that’s not an issue.  The air conditioner does a great job of moderating indoor temperature fluctuations when passive heating isn’t enough.

Cost-wise, I forecast another energy bill due to lower solar production and increased electricity consumption due to active heating..

However, the house will continue doing what it does best – keeping us comfortable at a low energy cost.