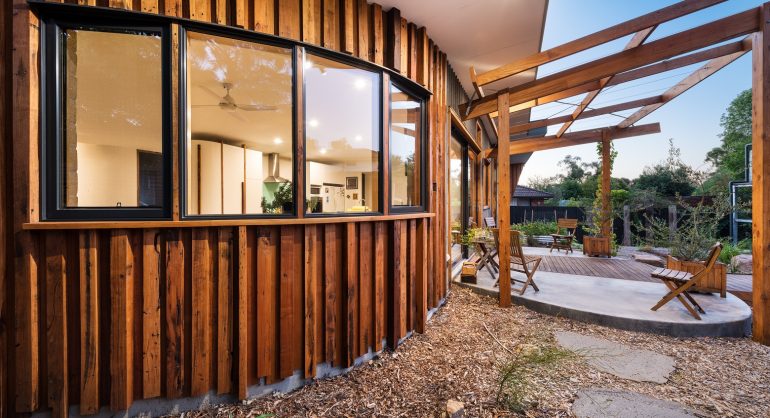 In August, our high performance home maintained a comfortable indoor temperature within the target range of 18 to 21oC.

The month’s energy bill was $47 or approximately $1.50 per day, down from $79 last month.  Increased solar power production meant we swapped over to being a net energy exporter to the grid.

What were the lessons to be learned as the weather eased out of Winter and headed towards Spring?

BOM recorded an average August daily maximum of 15.6oC, with an average nighttime minimum of 7.4oC.  Temperatures were only slightly higher than July so Winter definitely hadn’t let go of Melbourne.

Given the cold nights, the house continued to operate in “heating mode”. Staying within the recommended 18 to 21oC zone required a combination of passive solar heating and mechanical heating from the reverse cycle air conditioner (heat pump).

This temperature chart compares conditions in our living area (kitchen) with the ambient temperature on the north and south sides of the house.

Because the overnight temperature regularly dropped below 8oC, I left the reverse cycle air conditioner ticking over with a minimum setpoint of 16oC while we slept.  You can see the regularly repeating flat blue line on the chart.

In the morning, I increased the setpoint.  If it looked like we were in for a sunny day, I stopped at 18oC.  For cloudy days, the setpoint went up to 20oC.  With three quarters of the days in August providing useful sunshine for passive solar heating, it was increasingly common not to go to 20.

August 22 and 23 provide an excellent example of a passive solar home doing what it does best.  On both days, the weather was fine with clear, blue skies.  I turned off the air conditioner for the duration as the sun warmed the house during the day and the insulation limited the fall in temperature overnight.

For the sharp-eyed readers who spotted the missing blue line on August 24, that’s when the battery in the kitchen temperature sensor went flat. It took me a while to notice …

Overall, I could see the balance of heating load shift more towards passive solar in August.  The air conditioner wasn’t working as hard or as often with more sunshine picking up the load.

Our Sanden Eco Heat Pump programming hasn’t changed.  It runs only between 10am and 3pm, supplied by solar power or from the battery on really overcast days.

The electric vehicles aren’t going  far these days.  A 5km travel zone for COVID lockdown will do that to you.  Given the reduced energy demand, I usually topped them up with excess solar power on sunny days.

There were no significant changes to usage patterns for the rest of our electrical appliances (eg induction cooktop, washing machine, fridge & freezer).

In August, our home used 505kWh of electricity.  Daily consumption of around 16kWh is down slightly from the 19kWh/day number for July.  I suspect less EV charging and reduced need for heating are two contributors to the reduction.

Solar power production rose to a daily average of 17kWh, despite the significant variation from day to day. Another sign we’re moving out of Winter is hitting a 30+kWh day production late in the month.

We imported 138kWh of GreenPower but exported 156kWh of excess solar power.  How can that be?  Two reasons spring to mind.  Occasionally the inverter can’t keep up with rapid changes in demand so it imports grid electricity until the solar or battery catches up.  A good example is using the induction cooktop which cycles in and out on high load.  Other times, it’s because I’ve imported off-peak electricity but solar production the next day was higher than expected.  The battery filled during the day, causing us to export excess solar power.

As the import and export numbers show, our home became a net exporter of energy this month.  We contributed 18kWh more solar power to the grid than the GreenPower we imported.

Let’s review the energy balance and costs with two month’s data on the board.

One thing to remember with the energy cost is we pay roughly $1.15 per day for a grid connection fee.  Even if we didn’t use any electricity at all, our bill would be $35 per month just for the privilege of having that wire connected to our house.

Looking ahead to September

As Spring settles into Melbourne, I expect the home will move into neutral mode. Neutral is the time in between heating and cooling modes.  Warmer, sunnier days are likely to phase out the need for any heating to maintain a comfortable indoor temperature.

More daylight hours will increase solar power production so, if our consumption doesn’t jump, we should export more excess to the grid. A chart of the last two month’s solar power shows the upward trend.

With the Sun higher in the sky, the panels lying on the south facing roof are going to start earning their keep.  The array will get closer to its nameplate capacity of 8kW.

If you’re interested in taking a virtual tour of a few green homes, please visit the Sustainable House Day 2021 website.  Over 100 highly efficient homes will soon be on display.  There are lots of information sessions planned, both on the official date of October 17 and in the weeks beforehand.