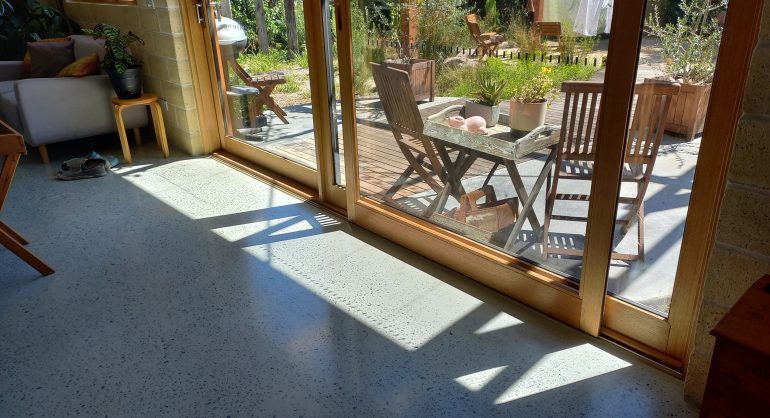 After sailing through January’s record temperatures, the milder February temperatures didn’t challenge our high-performance home.  The air conditioner stayed offline.  Passive cooling with natural air circulation at night was all that was required to maintain a comfortable indoor temperature.

Our energy bill was a $5 credit, down from January’s $11 credit.  Average daily electricity consumption for our home stayed around the 12kWh mark.

Solar power production dropped to 0.87 MWh, down from the 1 MWh January peak.  That’s still far more electricity than we need for hot water, EV charging, cooking, washing, etc.  Just under 550 kWh was exported to the grid.

At our local BOM weather station, the average daily maximum was 26.8oC, down from January’s 29.8oC. The overnight minimum average dropped too, going from 16.5oC to 14oC.

This temperature chart compares conditions in our living area (kitchen) with the ambient temperature on the north and south sides of the house.

Kitchen temperatures (green line) hovered around 22oC, below the recommended indoor summer temperature range of 24 to 27oC.  This range is based on balancing air conditioning costs with personal comfort.

We did not require air conditioning to control the kitchen temperature and maintain comfortable indoor conditions.

During the day, indoor temperatures rose by a couple of degrees.  With the Sun lower in the sky, sunlight is hitting the edge of the concrete slab.  The slab captures this energy which gently warms the interior.

Our house is beginning the transition to passive heating for the cooler months ahead.  More and more of the slab gets exposed to sunlight during Autumn.  However, in February, we’re not quite ready to trap all that energy as the house might get too warm during the day.

At night, I open the windows to allow natural circulation to vent excess heat.  Fortunately, Melbourne gets cool nightly changes shown by a 30oC day followed by a 14oC night. The cool air takes away excess heat so the interior temperature drops a couple of degrees.  In the morning, closing the windows protects us from the rising temperatures outside.

For the last few days in February, we were away, driving the MG ZS EV to Brisbane for an adventurous road trip.

The house operated in “home alone” mode, left to its own devices.

I was curious to see what would happen if we weren’t around to open and close windows.

This chart shows our home carried on regardless.

The house maintained a consistent indoor temperature, although it wasn’t stressed by a spell of hot weather.

My understanding of the major electricity users improved after being away from the house for a few days.

Using 4 kWh to keep foodstuffs cold is actually a big chunk of our average daily 12 kWh consumption.  Goes to show how a relatively small background load going 24/7 adds up.

Where does the rest of the electricity go while we’re here?  It’s split between cooking, washing, EV charging and lighting.  No air con required at the moment.

The solar panels are past their halcyon days of regularly producing 40+kWh per day.

However, the daily average for February is still a respectable 31 kWh.

Weekly production clearly shows a peak in Dec/Jan.  Production is now heading down to the Winter minimum.

Imported GreenPower flatlined at 9kWh for the month or a daily average of 0.3 kWh.  Importing only happens for brief periods when the inverter is catching up to a sudden load change like the induction cooktop cycling on and off.

Exported electricity in February dropped to 546 kWh, down from January’s record of 684 kWh.  A short month and lower production contributed to this decrease.

Despite the reduced production, feed-in credits were enough to offset the $1.10 per day grid connection fee and give us a $5 credit.

Looking ahead to March

Unless March has a surprise heat wave up its sleeve, I expect we will remain in passive cooling mode for the month.

Nighttime venting will probably be required after the occasional hot day.  Otherwise, the house will do what it does best – maintain a consistent, comfortable indoor temperature without the need for mechanical cooling.

There will be less solar power production but, given our low consumption, exports to the grid will continue.  It’s unlikely the feed-in tariff will cover the connection cost so we’ll probably return to an electricity bill of a few dollars.