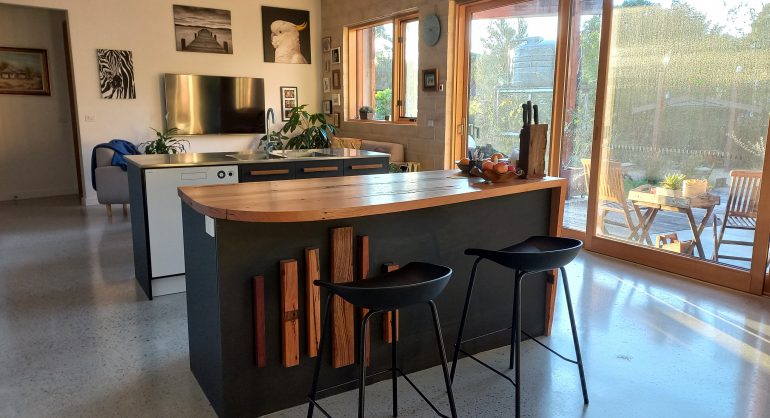 June in Melbourne was essentially a string of cloudy, cold and wet days.  Opportunities for passive heating were few and far between.  Active heating with the reverse cycle air conditioner was required to maintain a comfortable indoor temperature.

Not surprisingly, the monthly energy cost jumped again, from $43 in May to $75 in June.  The two major contributors to the increase were running the air conditioner and importing grid electricity to charge our EV.  Average daily energy consumption also jumped from 13kWh to almost 17kWh.  The air conditioner and EV demand have pushed the daily average up by roughly 6kWh.

Solar power production decreased due to the Sun being lower in the sky and the persistent cloud cover.  The panels only managed to produce 260kWh for the month.  All but 40kWh was self-consumed.

The BOM temperature averages are what you’d expect for Winter.

Average daily maximum temperature was 14.3oC with the chilly nights recording an average of 7.2oC.  On a couple of occasions, the nighttime temperature fell below 2oC.

The BOM solar exposure measurement was affected by the cloudy conditions.   The June average was a paltry 6.6 MJ/m2, down from May’s average of 7.5 MJ/m2.  There wasn’t a great deal of solar energy for electricity production or passive heating.

This chart compares the temperature in our living area (kitchen) with ambient temperatures on the north and south sides of the house.

In Winter, I aim to keep the living area (kitchen) temperature within the recommended zone of 18 to 21oC during the day.

Given the lack of sunshine, I used active heating with the air conditioner to keep our living area comfortable.

It’s important to point out that cloudy days don’t mean we’re sitting inside a dark room.  As this picture shows, there is still plenty of light coming through the north facing windows.  All we’re missing is the direct sunlight to warm the concrete floor and Timbercrete walls.

In the morning, I’d increase the air conditioner setpoint to 20-21oC.  This setting delivers an 18 to 19oC temperature on the kitchen sensor located on the other side of the room from the air con.

I turned the air con down to the minimum 16oC setting after dinner.  That prevents the indoor temperature from falling too far on a frosty night.  It’s quicker to bring the temperature back into the comfortable range the next day.

Given the excellent insulation and large thermal mass built into the house, it takes a while for the indoor temperature to fall. The air conditioner isn’t working all that hard overnight.

There were a couple of bright spots in June which highlighted the power of passive heating.

On June 29, the outdoor temperature managed to peak at 9oC.  Notice how the north and south wall temperatures are almost identical.  The cloud prevented any sunshine falling on the north wall so the two temperature sensors were monitoring similar conditions.

The air conditioner was running the entire day.

Now see what happens when sunshine appears.  On June 30, sunshine warming the north wall pushed that temperature up above 16oC.  The south wall, being shaded by the house, couldn’t get to 12oC.

Meanwhile, inside the house good things were happening.  By late-morning, the living area felt warm from the sunshine coming through the windows.  I turned off the air conditioner.

The data shows passive heating pushed indoors well above the ambient temperature of 16oC and higher than the air conditioner setpoint of 21oC..

It wasn’t until late-afternoon that I felt the need to turn it back on.  By this time, the Sun was low in the sky and we were no longer feeling its warmth.

The same thing happened from June 18 to 20.  When a gap opens up between the north and south wall temperatures, sunshine is available for passive heating.  The air conditioner isn’t needed in the middle of the day.

Firstly, we use the air conditioner most of the time.  Secondly, with grandkids to visit as often as possible, we are driving further in our MG ZS EV.  More kilometres means more charging from the grid at night because there isn’t usually any excess solar power available during the day. We need to charge it more often at home.

I’ve recently bought a portable fast charger from EVSE to speed up the process.  The charger fills the car at the maximum AC rate of 7kW, using the 32A three phase plug I had installed in the carport. A portable charger is more convenient for me because I can take it with us when we’re doing a road trip. This charger has lots of options I can use – from charging using a standard 10A plug, to a 15A circuit and all the way up to a 32A 3 phase circuit. It’s the Swiss Army knife of portable chargers!

It’s all down, down and down for solar power production.

Average daily production was less than 9kWh.  Now we’re past the Winter solstice, longer days, higher Sun and, hopefully, some sunnier days should see June as the production minimum.

Monthly production fell below 300kWh, the lowest amount since I started this detailed monitoring.

GreenPower imports jumped to 282kWh which was a substantial rise from 94kWh in May..

Household consumption accounted for almost all the solar power produced.  Only 40kWh was left over for export.

Minimal exports plus increased imports equals a total energy bill of $75, up from the $43 for May.

The June bill is a significant number.  It shows the energy cost to live comfortably in a high-efficiency, all-electric home during Winter is $2.50 per day.  That would be the high end.  Whenever there’s a sunny period, the house can swap to passive heating and cut costs by not requiring the air conditioner.

What does a year’s worth of data tell us?

The total energy bill for our high-efficiency house (including charging an EV) was about $260.  That’s less than $1 per day over a year to live in a comfortable, light-filled home. To put that into context, it costs us about $1 per day just to be connected to the grid, even if we used no electricity at all. Our feed-in tariff payments in other months defray the cost to import power during the middle of the year.

Importantly, we managed to export over 4MWh of renewable electricity back into the grid to support the transition from brown coal power to solar & wind power.

This post marks the end of my 12 month monitoring project.

I’ll keep collecting the data. If anything changes dramatically, you’ll be the first to know.

Next month, I might do a post covering the major lessons learned from the last 12 months. There could be some interesting insights to be gained.