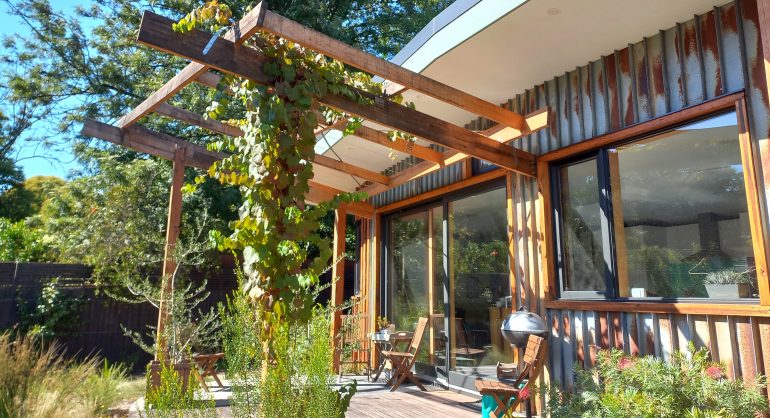 March was an interesting month season-wise.  A few 30+oC days reminded us that Summer wasn’t long ago.  However, because the Sun was lower in the sky, the house was moving into passive heating mode with sunlight warming the slab.  Indoor temperatures for a hot day in March weren’t uncomfortable, but were noticeably higher than for similar weather in Summer.  Natural air circulation at night vented warm air so we didn’t need the air conditioner.

Our energy bill was a $4 credit, a bit less than February’s $5 credit.  Average daily electricity consumption for our home fell from 12 to 10kWh because we were away on holidays for 10 days during the month.

Solar power production continued its downward trend.  With the Sun is lower in the sky and shorter days, the panels produced 0.8 MWh.  Still, lower household consumption ensured a respectable export figure of 477kWh.

According to BOM, the average daily maximum in our neighbourhood fell slightly from February’s 26.8oC to 25.4oC in March.  The overnight minimum average hardly changed, going from 14oC to 13.6oC.

There was less sunshine available for solar power in March, compared to February.  I base that observation on BOM solar exposure measurements.  Daily solar exposure fell from just under 20 MJ/m2 to 15 MJ/m2.

This temperature chart compares conditions in our living area (kitchen) with ambient temperatures on the north and south sides of the house.

Kitchen temperatures (green line) fluctuated more than in previous months, sometimes approaching the top end of the recommended indoor summer temperature range of 24 to 27oC.  This range is based on balancing air conditioning costs with personal comfort.

We did not require air conditioning to control the kitchen temperature and stay within the target range.  Passive air cooling using nighttime venting was all we needed to bring the indoor temperature down again before the next hot day.  Natural air circulation takes advantage of the sub-20oC air that rolls into Melbourne at night.

Why did indoor temperatures fluctuate more?

A combination of two factors caused the indoor temperature to fluctuate more in March than it did in previous months.

Firstly, the house is moving into passive heating mode.  With the Sun lower in the sky, the strip of concrete warmed by sunlight gets wider.

The slab captures this energy and warms the interior during the day. Indoor temperature gradually rises.

This chart shows the indoor temperature climbing towards 27oC after a couple of hot days in March.

Secondly, ambient temperatures on some days were closer to Summer conditions than Autumn.  During the Summer months, the eaves shade the concrete slab so it stays cool and moderates the indoor temperature.

Temperature records from similar conditions in January shows the indoor temperature didn’t rise above 24oC because the slab is shaded by the eaves.

The combination of passive heating and Summer conditions is like leaving a heater on during a hot day.  It’s going to warm up inside.

Plan to cope with the shoulder season

I’m calling the time between full Summer and full Autumn a shoulder season.  The concrete slab needs shading for the occasional run of hot days.  Longer eaves if you will.  However, that shade can’t be created by a permanent structure.  Eaves that are too wide run the risk of reducing the Sun’s passive heating in the cooler months, when we need it most.

Introducing our solution to this dilemma.  We’re covering the pergola on the north wall with a deciduous grape vine.

In a couple of years, the leaves will shade the north-facing windows during March and some of April.  That’s a temporary reduction in passive heating.

When the leaves fall in Autumn, I’ll cut the vine back to the main runners along the top of the pergola.  The objective is to maintain a “spindly” pergola structure during Winter.  Keeping the bare minimum of woody vine maximises the amount of sunlight shining through the pergola and warming the slab.

In Spring, the grape vine does what it does best – produces plenty of runners covered with large leaves.  These leaves effectively extend the eaves and help to shade the slab, improving the passive cooling during the warmer months.

The vine is doing well considering this is the end of its second growing season.

No changes to the major electricity users.  Most of our energy goes to hot water, kitchen appliances and EV charging.

The air conditioner remains silent, ever hopeful of getting switched on at some point in the future.

Solar panel production is heading down the slippery slope towards the Winter minimum.

We’re now running an average of 25kWh per day with the occasional spike above 35kWh per day.

The Summer weekly production peak is well and truly behind us with March hovering around the 200kWh mark.

With a total of 11kWh for the entire month, imported GreenPower hasn’t changed much for a while.  The daily average hovers around 0.3 kWh.  The only time we import is when the inverter is catching up to a sudden load change, such as the induction cooktop cycling on and off.

Exported electricity was lower in March (477kWh) than February (546 kWh), despite the extra three days of production.  Cloudy weather and shorter days constrained production.  The export would have been lower if household consumption hadn’t dropped due to us being away on holidays for 10 days..

The solar panels managed to pay for the $1.10 daily connection fee and achieve a slight credit of $4 for the month.

Looking ahead to April

Melbourne is heading into colder weather so it’s appropriate for the house to go into passive heating mode.  The battle between passive heating and 30+oC days is over (fingers crossed).

Passive heating should be enough to keep indoors at a comfortable temperature.  Of course, all bets are off if April delivers a cold snap with a run of cloudy days.  We might have to go for active heating and use the air conditioner to gently nudge the temperature up into the target range.

The Sun being lower in the sky is good for passive heating, but not so good for solar power production. I can see us paying our electricity retailer a few dollars as electricity exports drop and our feed-in payment falls as well.