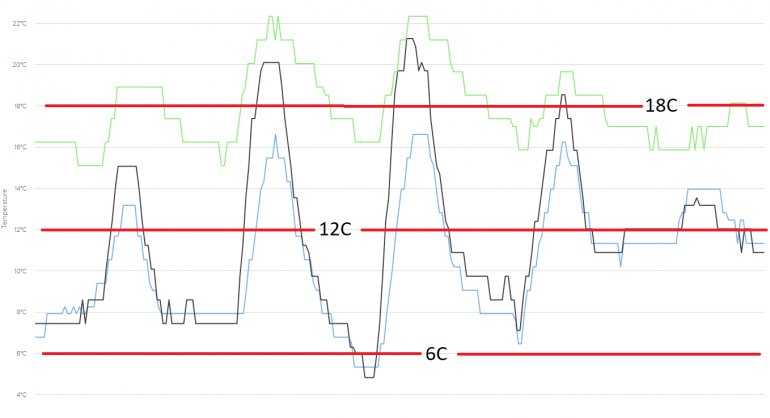 May comfort and cost report

The monthly energy cost rose again, from $18 in April to $43 in May.  Greater use of the air conditioner contributed to a rise in daily electricity consumption.  During warmer months, our daily average hovered around the 11kWh mark, but it rose to just under 13kWh in this colder weather.

Unsurprisingly, solar power production continued to fall due to shorter days and the Sun being lower in the sky.  The panels pumped out 395kWh in the month.  There was a small export of 94kWh which balanced electricity imported from the grid.

Average daily maximum fell to 16.7oC, down from 21oC in April.  The daily numbers highlight a significant change.  At the start of May, daytime temperatures reached 21oC but, by the end of the month, we saw maximums of just 10oC.

Nights were also colder.  The overnight minimum average decreased from 11oC in April to 8oC.

The BOM solar exposure measurement is another number in steady decline.  The May average is 7.5 MJ/m2, half March’s average of 15 MJ/m2.

Staying comfortable in May

This chart compares the temperature in our living area (kitchen) with ambient temperatures on the north and south sides of the house.

In Winter, I aim to keep the living area (kitchen) temperature within the recommended range of 18 to 21oC during the day.

Please ignore the indoor temperature dip showing up in early May.  We were out of the house for a few days.  I was curious to see what would happen if I left the house to its own devices and the air conditioner switched off.  As you can see, indoors wasn’t quite as warm as usual.  On the bright side, the temperature didn’t fall too far.

I use a combination of passive heating (powered by sunshine) and active heating (turn on the air conditioner) to keep our living area comfortable.

In the morning, I’d increase the air conditioner setpoint to 20-21oC.  This setting delivers an 18 to 19oC temperature on the kitchen sensor located on the other side of the room from the air con.  When the sun was shining, I turned off the heat pump during the middle of the day and swapped to passive heating mode.
For nights when the temperature was predicted to plummet, I kept the air conditioner running at the minimum 16oC setting.  It’s the equivalent of “banking a fire” to prevent the indoor temperature getting too far out of the target range.  If the night wasn’t going to be too cold, I’d switch the heater off and rely on thermal mass + excellent insulation to limit the temperature drop.

This chart shows the power of passive heating during clear, sunny days.  Let’s look at the two spikes on May 23 and 24 when the kitchen temperature rises above 22oC.

On May 23, I hadn’t used the air conditioner overnight.  I switched it on at breakfast time, went with a 20oC setting for the day and then turned it off at bedtime.

May 24 was slightly different.  I turned the air conditioner off at lunchtime because passive heating was doing all the work.

The data shows passive heating pushed indoors above the ambient temperature of 20-21oC.  By this point, the air conditioner was in standby mode.

Notice how the sunshine also affects the outdoor sensors.  Like the thermal mass, the north side is warmed by the sun.  The south side is in shadow all day and 4-5oC cooler as a result.

The weather wasn’t as kind during May 16 to 18 with the days being overcast with the occasional drizzle of rain.

This time, I relied on the air conditioner for heating.  Whenever the sun came out from behind the clouds, it helped but we couldn’t rely on it.

At night, I turned off the air conditioner as it didn’t seem to be needed to prevent a significant fall in temperature.  Indoors didn’t drop below 16oC.

Without sunshine, the difference between the north and south sensors disappears.  Both are essentially in shade.  There’s not a lot of energy going into the thermal mass.

Our electricity consumption is rising because I’m using the air conditioner for heating.

May was the last month we could get away with charging the EV from excess solar power production.  By the end of the month, all the production was going to the standard household consumers – hot water heating, cooking, fridge/freezer, etc.  Future charging at home will be imported off-peak GreenPower.

The decline in solar power production is obvious on these two charts.

At the start of May, the panels could produce 20kWh in a day.  Look at what happened during a run of cloudy days at the end of the day.  We’re down to just 10kWh and things aren’t likely to be much better for a while.

Weekly production is below 100kWh and looks similar to the data recorded when I started these reports in July last year.

GreenPower imports rose again, jumping to 94kWh in May from 24kWh in April.

Topping up the battery with off-peak power more frequently was a significant contributor.

Topping up means importing off-peak GreenPower before a cloudy day when the solar power + battery isn’t likely to get us through the late afternoon or evening.  Adding the imported electricity to the next day’s solar production avoids the battery running out just when grid power prices are at their highest.

Not being an exact science, there are days when the weather is sunnier than predicted.  The panels manage to fill the battery and the inverter swaps to export mode.  I should have imported less to avoid this situation.

We exported a paltry 93kWh which neatly balanced the 94kWh import.

The May to August solar power production trough is making its presence felt in these numbers.

The electricity export average is falling because there isn’t much production left over after meeting household demand.

Even so, the overall picture looks good.  Since July 1, we’ve exported almost seven times the amount of electricity we imported!  That’s over 4MWh of renewable energy going into the grid.

Looking ahead to June

The cold, cloudy days at the end of May are a taste of what’s coming in June.

We’re going into full active heating mode, unless the sunshine miraculously improves.  I’ll use the air conditioner to nudge the indoor temperature up during the day and maintain a minimum temperature overnight.  Fortunately, the combination of a well-insulated building envelope, good draught sealing and thermal mass minimises the heat loss.  We won’t need a huge amount of energy to stay comfortable indoors during Winter.

Let’s see what the comfort and cost numbers say in my next post.