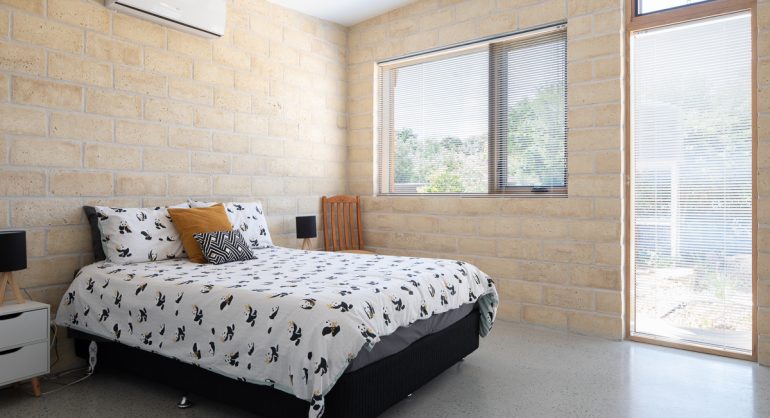 During October, our high performance, all-electric home maintained a comfortable indoor temperature within the target range of 18 to 21oC.

The total energy bill was a paltry $5 (about 15c per day), down from $16 in September.  Average electricity usage of 13kWh per day was similar to last month’s consumption.

We reached the sweet spot for a solar powered, efficient home in October.  The solar panels are pumping, filling the battery for overnight consumption and providing excess for trickle charging EVs during the day.  Thermal mass in the house prevents the overnight temperature dropping too far, so mechanical heating is rarely required.

BOM recorded an average September daily maximum of 19.1oC, continuing a month to month upward trend from 17.7oC in September. The nighttime average of 8.7oC rose slightly from the 7.8oC recorded in September.  Temperatures didn’t vary wildly, with only the occasional plunge below 5oC.

This temperature chart compares the temperature in our living area (green line) with the ambient temperatures on the north and south sides of the house.  Note how the interior temperature remains relatively constant, despite the outdoor fluctuations.

The reverse cycle air conditioner rested on its laurels for most of the month.  A combination of internal thermal mass and excellent insulation was all we needed to maintain a reasonable indoor temperature overnight.

During the day, passive solar heating lifted the indoor temperature to the recommended 18 to 21oC range.

Our house transitioned to “neutral” mode during the month, sitting between heating and cooling modes.

The house doesn’t need mechanical heating at night.  During the day, sunshine coming through the north facing windows is enough to warm the interior.

Looking at October 20 to 22 on the temperature chart hints at what is coming next.  Warmer, sunnier days gradually increase the interior temperature.

What does that mean for later in the year when the outdoor temperature continues to climb?  Relax everyone.  Move away from the air conditioner controller.  The house is ready to move into passive cooling mode.

Firstly, the eave over the north facing windows is coming into play with the Sun higher in the sky.  This photo shows just a narrow strip of sunshine warming the concrete slab at midday.  The eave shades our slab to keep the interior cool while the outside bakes in the summer sun.

Secondly, opening windows at night allows natural air circulation to cool the interior if it’s getting a bit too warm for comfort.  We’re lucky in Melbourne to often get cool changes after hot days.  It makes sense to vent the house and swap warm air with cool air from outside.

This chart shows our solar power system loves clear days with the Sun higher in the sky.  Hence, there are plenty of electrons to go around. The tall, blue consumption spike before midday is charging the LEAF and powering the hot water system heat pump. I then trickle charged the MG between midday and 4pm.

In fact, charging EVs helps our solar array operate at maximum capacity.  We’re limited to a 5kW export by the electricity distributor.  At the moment, our nominal 8kW system is topping out at 6kW in the middle of the day.  Finding a useful place to put the extra kW or so means the panels can trundle along without hitting the export limit.

Back up a minute.  What’s that about an 8kW solar array running at a maximum of 6kW?  Let me explain.

We have three panel groups on the roof.  Production data from the last few days highlights differences between what each group can produce.

The 12 panels on the northern roof are the champions because they are tilted upwards and face northwards.  Note how the neighbour’s canopy trees shade the eastern end and cut those panels’ production somewhat.

Next best are the group of 10 panels on the southern roof.  As the Sun gets higher in the sky, their production improves.  I’m looking forward to comparing production from the tilted, north roof array with the lie-flat-on-your-back array in mid-Summer.

Bringing up the rear is the group of four panels on the eastern end of the roof.  The nearby deciduous canopy trees limit their production at this time of the year.  After the trees lose their leaves, these panels are a useful addition to total production.  They’re more of a Winter performer.

These production differences support our decision to fit each panel with an optimiser. As well as seeing how each panel is performing in real time, the optimisers stop shading of one panel from cutting output of the rest of the string.

In October, average daily consumption remained at 13kWh.  Overnight mechanical heating fell away to be replaced with trickle charging EVs during the day.

Average daily solar production was 28kWh, with peaks above 40kWh showing up occasionally.

Any solar power we didn’t need for personal use (eg charging the home battery and the EVs) went to the grid.

As a result, imported GreenPower dropped to a miniscule 9kWh for the month. The home battery had enough capacity to get us through the night (and then some).  Even on cloudy days, we managed to recharge it and avoid importing from the grid.

With imports almost non-existent and solar production rising, we exported 460kWh, up from 340kWh in September.

Payments for our solar exports almost offset the $1.10 per day grid connection fee.  As a result, the energy bill came to a grand total of $5.

Let’s review the energy balance and costs since July 1:

Going into Summer, exports are clearly pulling away from imports.  The following chart shows how much solar power production has risen since the lows of Winter.

Looking ahead to November

The next month will begin testing passive cooling features on the house.  If there are a few hot days coming up, we might have to use a bit of electricity by, wait for it, turning on a ceiling fan …

Touch wood, the solar panels continue to soak up the sunshine.  Our challenge will be finding enough places to send the electrons when production is constrained by the 5kW export limit.  Still, with COVID restrictions easing, there’s a good chance the EVs will need regular topping up as we travel further afield more often.

Only a few days to go until we find out if our house has won an award(s) at the Australian Sustainability Awards.  We’re finalists for Single Dwelling (New) and Smart Building Ideas.  To top it off, our builder, David Coates, is on the shortlist for Emerging Sustainable Architect/Designer.  Getting onto the shortlist is quite the rush, so winning a prize would be an amazing experience.