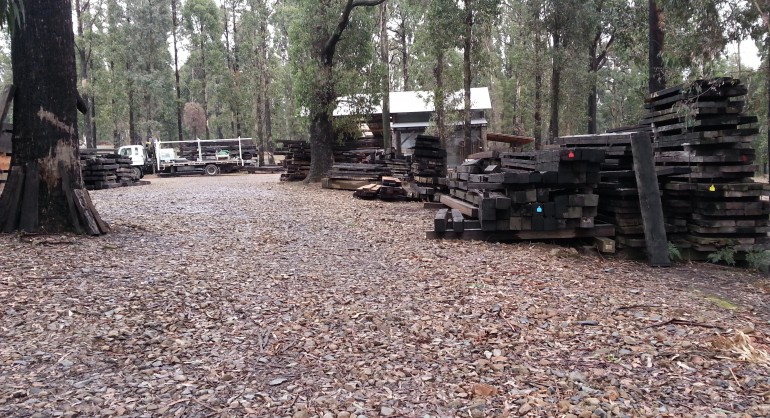 One key item in the project design is adding character to the look of the three homes through considered use of recycled timber features.  We are interested in adding a sense of connection to the past through timbers that are old and re-purposed.  At our last house, the fence made of old bridge timbers was a work of art that told a story just by looking at it.

David recommended a road trip to chat with Mark at Recycled Timber Specialists in Kinglake.  The plan was to be inspired by the timber on display.  What could be used in the design?  Would a particular batch of timber suggest a design feature? 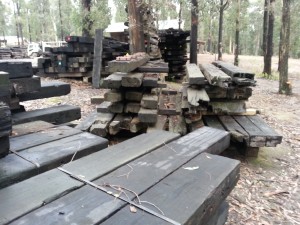 Wandering around the yard was certainly inspirational, as well as a chance to hear about the history of Victoria’s old wharves and railway lines.

These old wharf timbers are about 150 years old.  They were hand cut in the days when wharf designers weren’t aware how strong native Australian timber could be.  Being 40cm across, they are massive!  David is thinking about using something this thick as feature support beams on the northern side of each house.  Since our walls are going to be 35 to 40 cm thick, it’s possible to use timbers like this as components in the wall structure. 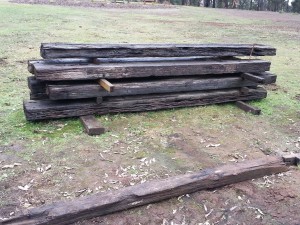 Other timbers retain the bolts and nails that held them together in a previous life.  Also on display are the marks made by adzes and chisels during the construction process.  You can feel a connection to the men who worked on the wood over a hundred years ago.  We’d love to be able to see these fittings and marks from both inside and outside the house. 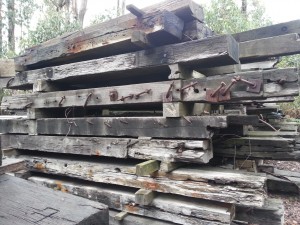 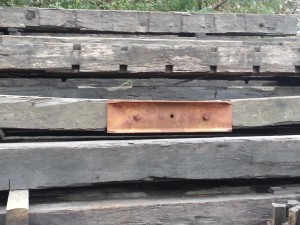 Character aplenty in these old timbers.

Some timbers show their age through the damage to the surface.  What has happened to these old pieces of wood to produce a dimpled pattern? 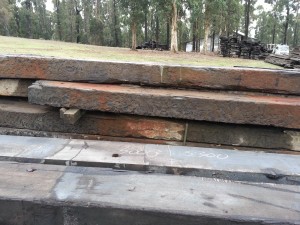 Underneath that stained and damaged surface is the colour of the original timber.  Mark had cut a timber for an inspection and offered us a sample to admire.  The difference between the two was dramatic.  David and Libby were brainstorming ideas about having sections of wood in current condition transitioning to sections that were sanded back to reveal the original colours. 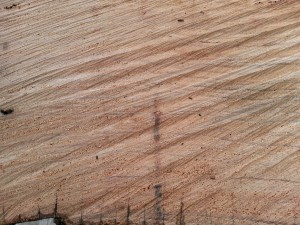 Beautiful colour and grain behind the stained surface. 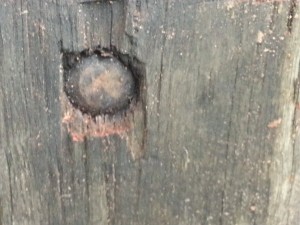 Original surface stained and damaged, along with the head of a bolt

In another area, we came across a section of recently cut redwood timber air drying. 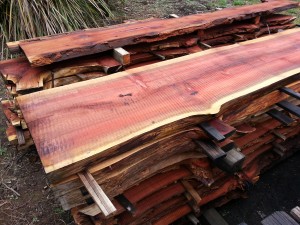 Another stack caught our attention and suggested a possible solution to an issue with decking and bridges in the landscaping design.  Apparently this non-slip decking had been used in the Melbourne CBD.  The custom made material wasn’t that old but didn’t fit with a redesign so it was now looking for a new home.  Mixing strips of this timber with other slats could produce an attractive and safe walking surface. 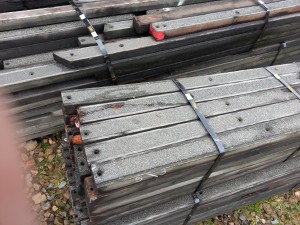 So many choices!  So many possibilities!  The three of us were tired, but excited about the possibilities.  Mark’s personal tour had given us plenty to think about.

We will definitely be adding character to the finished houses with recycled timber – not so much to overwhelm the light, airy feel to the homes, but enough to make eye-catching features that speak to an historical connection.