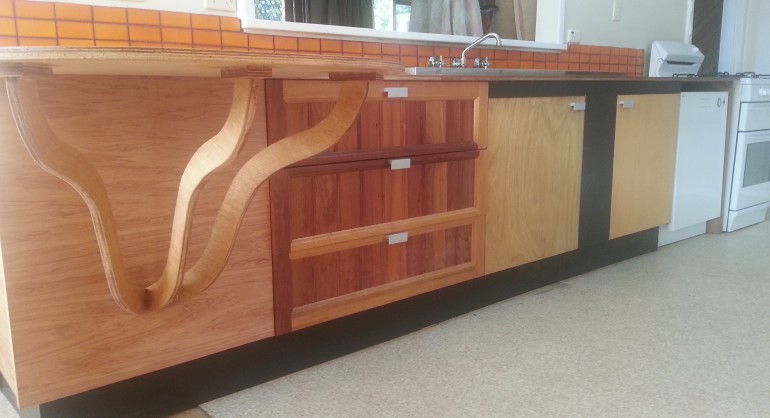 Our amazing funky recycled kitchen was installed by David and his crew while we were out of the house, looking around the HIA Melbourne Home Show.

Kitchen before the revamp

Although the existing kitchen wasn’t user-friendly, we didn’t want to use a lot of resources upgrading it. 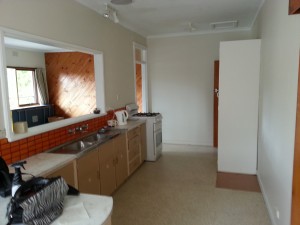 Kitchen bench is too low and too narrow. 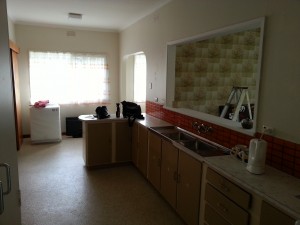 Not a lot of useful storage space in the old kitchen.

Kitchen reduced to a blank canvas

On Day 1, the kitchen was taken back to a blank canvas so David could easily see what he had to work with.  During the deconstruction, several interesting pieces of wood were reclaimed.  David was keen to re-use suitable materials from the existing structure.

During Day 2, the crew were busy back at their “shed”, going through bits and pieces that had accumulated over the years.  Their aim was to make the new kitchen entirely out of recycled and reused materials. 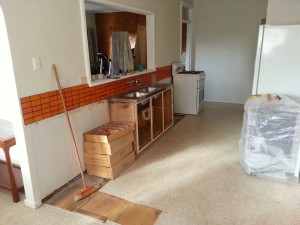 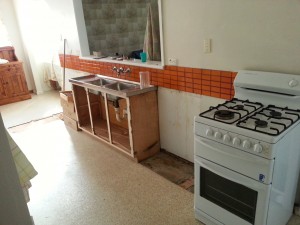 Just the old sink left behind.

David and the crew were justly proud of what they had achieved.  They’d emptied the work shed of anything that had a chance of being used in a new kitchen.  There was a set of drawers that were kept from a previous kitchen.  A cupboard that didn’t work out in another kitchen was modified to suit this location.  Gaps were filled in interesting ways with other leftovers.

The wavy supports on the end of the bench immediately catch your eye as you walk in.  We suspect this part of the construction is in the ‘why not have some fun while you are at it’ school of design.  It’s a whimsical addition that says temporary doesn’t have to be bland and boring.  Temporary can be fit for purpose AND attractive.

The result is just what David set out to create from recycled and reused materials – a funky kitchen. 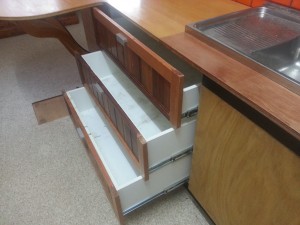 The deep, wide drawers are a huge improvement in under-bench storage. 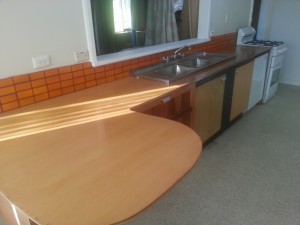 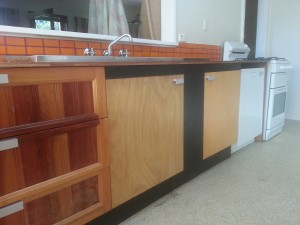 Filling gaps with a black border adds to the overall look. 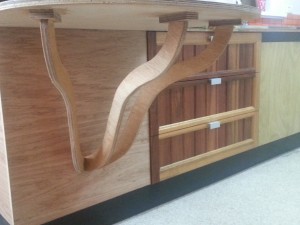 PS – incredible what you can find in old houses

Old houses can often turn up a few surprises when it comes to cleaning out cupboards.  However, we weren’t expecting to find a couple of bullets that had dropped behind a chest of drawers.  Jack suggested we drop them off at the local police station on the way home, which we happily did.  Who knows where they are now! 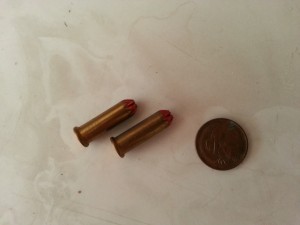