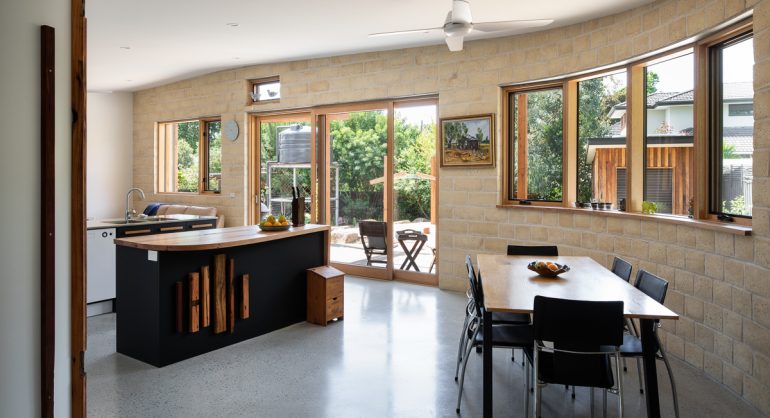 Our energy bill flipped to a credit of $8, down from a cost of $2 in November.  Average daily electricity usage dropped slightly to 12kWh, but that hasn’t changed dramatically since September..

Long, sunny December days maximised solar power production so there was plenty of electricity for the three major users – recharging the battery for overnight consumption, powering the hot water system and charging EVs.  The reverse cycle air conditioner is wondering if we’ve lost the remote control.  Natural air circulation was all the cooling we required.

Summer arrived in December with the BOM recording an average daily maximum of 25.1oC, well above the 20.9oC recorded in November. The nighttime average also rose, going from 10.3oC to 11.6oC.

This temperature chart compares conditions in our living area (kitchen) with the external temperatures on the north and south sides of the house.  Compare the outdoor temperature fluctuations with the relatively flat green line for indoor temperature.

After swapping between Summer, Winter and Spring last month, Melbourne settled into early Summer.  Hot 30+oC days were followed by cooler nights with temperatures in the low 20’s or below.

Cooler nights allowed us to continue in “passive cooling” mode.  First thing in the morning, we closed all the windows.  The cool thermal mass kept the indoor temperature below the recommended 27oC summertime limit.  At night, opening windows vented warm air using natural ventilation.  Clerestory windows located high on the walls of the bedrooms and living area are essential for purging any warm air at ceiling height.

In the kitchen, the clerestory window is sited above the large sliding door on the north wall.  This is an ideal location because the ceiling rises up to this point from the southern wall and the east/west walls.

This temperature snapshot from late-December shows how passive solar design and natural air circulation work together.

Excellent insulation and thermal mass (concrete slab and reverse brick veneer Timbercrete blocks) limit the temperature increase during the day.  Suitably placed windows are opened at night to flush out the warm air, replacing it with cooler air from outside.

Living this way does require a bit more time and effort than simply turning mechanical cooling on and off.  However, there are benefits.  Natural air circulation feels more comfortable than an intermittent stream of cold air from an air conditioner.  Taking advantage of nighttime breezes also avoids using, and possibly paying for, energy to run the cooler.

The hot water heat pump runs during the middle of the day so it’s powered by electricity from our solar panels.  When it’s cloudy, the battery cuts in to make up the difference.

I continue to trickle charge the MG or LEAF electric vehicles during peak solar power production in the middle of the day.

On average, we used 12.3kWh per day for all our energy needs – hot water, EVs, cooking, lighting, washing, etc.

This chart shows the solar panels are regularly producing 40+kWh per day.  Things are pumping away on the roof.

A weekly production chart indicates this is peak solar production season.  The trend line has flattened around the 240kWh per week mark.

I aim to have our big electricity users consuming solar power during peak production, from 11am to 4pm.

Between 11:00am and 1:30pm, the hot water heat pump warmed the water in the 300l storage tank. Once that finished, I charged the LEAF, then the MG.

In the background, the inverter is exporting excess solar power to the grid, up to the 5kW maximum allowed.

The chart confirms my suspicion about this being a high water mark for solar power production. Our 8kW system is limited to 6kW production. A 2kW household demand plus a 5kW export limit should, in an ideal world, have the array producing 7kW. But it doesn’t. If we’re using 2kW, the inverter exports only 4kW because the best the panels can do is make a total of 6kW. The reasons are shading from our neighbour’s trees and the panel locations. All 26 aren’t exposed to direct sunshine simultaneously.

The ten panels on the south roof are definitely taking advantage of the Sun being high in the sky.  As you can see, they are making similar amounts of electricity to the raised panels on the north roof.

However, no matter what I do, total production won’t go above 6kW.

Still, that’s not an issue.  Even with the production limit, we have more than enough solar power to meet our needs.

In December, the panels produced an average of 33kWh per day but we only used 12kWh.  The rest went into the grid to back out fossil fuel power.

Imported GreenPower dropped to a new low of 8kWh for the month.

So, with excess solar power going to the grid during the day and a battery supplying electricity at night, why are we still importing?  Importing occurs when the inverter can’t keep up with a sudden change in household load such as using the oven or induction cooktop.  They suddenly require a high load which comes from the grid until the inverter catches up with electricity from the panels or battery.

In the scheme of things, it’s a tiny amount at an average of 0.3kWh per day.  Also, I’m buying GreenPower so the power is sourced from a wind turbine or solar farm.

Exports for the month reached a personal best of 650kWh.

The exported electricity earned enough income to more than pay for the $1.10 per day grid connection fee.  As a result, we finished December with an $8 credit to put towards the January connection fee.

Let’s review the energy balance and costs for the last six months.

Looking ahead to January

Those few days at the end of December are an indicator of the weather ahead.

Temperatures will be higher for longer, both during the day and at night.    Chances are we might have to, pause for dramatic effect, turn on the air conditioner after an extended period of hot days.  That won’t be often.  The house has already demonstrated it can stay below 27oC for a few days of hot weather, relying only on natural air circulation for cooling.

My forecast is passive cooling with occasional mechanical cooling for some light relief.  Note to self though.  Where did I put that air conditioner remote?

Now for the electricity bill.  Our daily consumption could rise from using the air conditioner and, possibly, driving longer distances in the EVs if Omicron allows.  These changes probably won’t increase grid imports since there should still be plenty of excess solar power available.