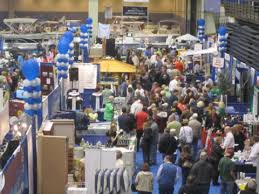 It’s always worth a trip to the HIA Melbourne Home Show to see what might be of interest to our build.  The trick is to arrive at opening time and then maintain a steady pace through the many display aisles.  Lib does a good job of making sure our pace isn’t too quick.  Left to my own devices, I’d be out of there in 20 minutes, not having seen very much of the contents.

Interesting to note the lack of a specific sustainability theme at this year’s show.  Last time we went, there was a desire to cater to the green market with a stage devoted to guest speakers talking about passive design, solar power, etc.

As expected, we had to avoid eye contact with the financial planners, floor cleaning product specialists, cooking utensil providers and, this year, the people selling cocoon-shaped vibrating chairs.  It looked to me that sitting in one of those chairs would be an experience that wouldn’t end until you had signed the purchase agreement.  Oh, and it seems that gas-fired fireplaces are making a comeback as well.  Does anyone else feel warm in here?

There were some things that we found educational.

Hydronic heating at the Home Show. 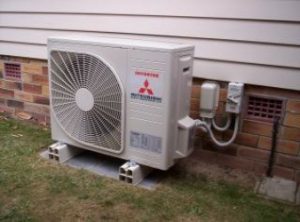 We want to use a heat pump to provide the hot water for this service, rather than the traditional gas fired boiler. Running what is essentially a reverse cycle air conditioner on electricity generated by solar panels seems to be more responsible than burning gas.  Being responsible does come at a cost.  Heat pumps are currently about twice the price of a standard gas boiler.  Still, having clambered up to the moral high ground, it would be a pity to slip back just to save a few dollars on the purchase price.

First we chatted with the NewGen Solar folk about their Sanden products.  Interesting that the rep suggested we keep the hydronic heating separate from the hot water system by going with two heat pumps.  He was concerned a combined system would be less reliable.  A heat pump problem would take out both the floor heating and hot water system, leaving us unable to take a hot shower in a cold  house. 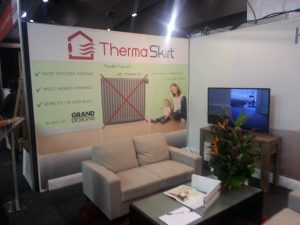 Later on we stopped by the ThermaSkirt crew for a fascinating discussion on several topics.  First, they suggested we could use a combined hot water and hydronic heating system based on a Siddons Solarstream design.  No concerns with reliability based on their experience.

Next topic was how to install the underfloor heating coils.  Rather than putting the coils into the slab and then covering them with concrete, the suggestion was to use an in-screed design.  In-screed means laying down most of the slab depth and then allowing it to dry.  A layer of insulation is placed on top of the slab before the coils are laid and the concrete screed poured.  Apparently, the advantage is that the hydronic heating isn’t trying to heat the entire slab so it doesn’t take as long to heat up the room when heating is required.  But, does this reduce the amount of thermal mass available to be heated by sunlight?  More research definitely required on this one.

Lastly, we chatted about their skirting board heating system which is an alternative to in-slab heating.  Could this be a better option for the bedrooms which will have wooden floors over the slab?  Again, more research required.

More ideas from the Home Show.

There were other nuggets of gold that we uncovered. 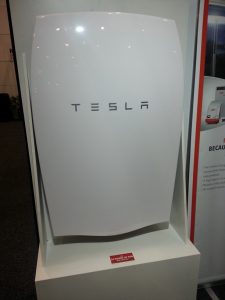 A Tesla Powerwall looks as good in real life as it does in the advertising – so sleek and shiny.  It’s an artwork that stores electricity.  We had a good chat with the Mark Group representative about the sizing of solar arrays and batteries.  There are so many options available now compared to just a couple of years ago.  For suburban houses, it seems a common approach is to stay connected to the grid and install an array/battery combination that avoids purchasing power during the afternoon/evening peak.  The hours between 3pm and 11pm are usually when electricity is most expensive.  So, a 7-10kWhr battery linked to a 3-4kW solar array could do the trick. 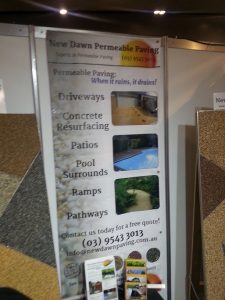 Permeable driveways are the go for allowing rainwater to soak into the ground rather than being diverted into stormwater drains.  New Dawn Permeable Paving showed us some attractive toppings.

Watching steam from a pot of boiling water travel sideways into a vent grabbed our attention.  Bora make induction cooktops that are fitted with an exhaust vent in the middle.  All the fumes from cooking go straight into the vent and are sent outside.  This avoids having the rangehood above the cooktop. 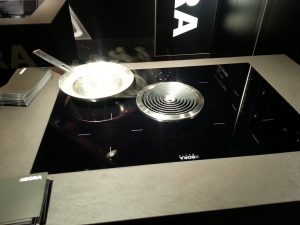 Zero VOC paints are something that David is passionate about.  He wants to avoid exposing his crew to harmful chemicals during construction and then leaving the residents to breathe in the residues.  Finding ecolour at the Home Show was a bonus.  They are an Australian company, based in Byron Bay,  that make a full range of zero VOC paints.  No Bunnings store displays for them.  Orders are done online and then the paint is shipped to your door. 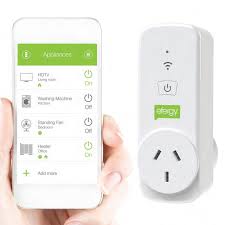 Buried deep inside the Home Show was a little booth for efergy.  They were selling wifi enabled cutoff switches for electrical outlets.  Libby’s eyes were rolling as I became engrossed in a presentation about how you could use an app to turn things on and off, monitor their power consumption, set times for devices to be switched on automatically, …  I could see she was thinking I was involved in another example of what she calls “power-porn”.

Being the sensible person she is, Libby asked the crucial question about the cost.  Even with a cash discount, I couldn’t think of anything that really justified this particular expenditure right now.  Still, I live in hope.  The company has been approached by Powershop as a possible supplier of real-time household energy monitors for their customers.  My eyes popped when I was shown the app that displayed all the information available from this dandy device.  I could see the power monitor being a possibility as part of the house design.

No toy for this boy (this time).