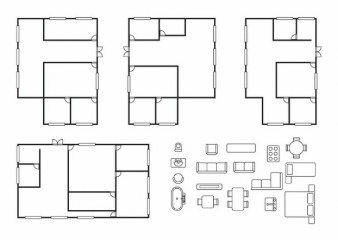 Island idea was a breakthrough

How hard can it be to get the floor plan right?  Harder than we thought when we started on this particular activity.

The more brains the better.

David had given us a scaled drawing of the proposed floor plan with instructions to give it a decent test run.  What worked?  What didn’t work?  What did we want to change?  Now was the time to lock in the design fundamentals so he could confidently move onto detailed drawings.

Libby immediately showed the drawings to her network at Aqua Aerobics.  Everybody has different experiences and viewpoints on what works in a design so she was keen to get their input.  Everyone responded with an avalanche of ideas and comments.

After that, it was back to the cork board.  Bits of paper were cut out to represent beds, cupboards, chairs, sofas, kitchen benches, etc.  The scaled outline of the house was stuck on the board and then the cut-outs were shuffled around to see how everything fitted.  The poor drawing was stabbed numerous times as Libby experimented with a variety of arrangements.  Looking at the board was like watching a Wallace and Gromit movie as items migrated round and round the board.

After days of discussion, shuffling and more discussion, a couple of key changes surfaced.

There were a few comments about putting the TV into the north-eastern corner of the house where it would obscure  the view and be affected by the light streaming in from the large windows.

Rather than tweak that arrangement, we decided to simply swap the TV (and living area) to the opposite side of the open area and hang it above a couch.  That way the living area served two purposes.  For just the two of us, we’d use the lounge chairs facing the wall to watch TV.  When visitors arrived, all the seats could be used without the TV getting in the way or being a noticeable feature.

Having the dining area on the other side meant putting the table parallel to the eastern wall, closer to the bench running along that wall.  By using the covered bench as a seat, we could reduce the width of the dining area, leaving more room for the kitchen area that lay between the living area and dining area.

Honey, I shrunk the laundry.

The laundry was a similar size to the second bedroom.  It ended up this way because it was in a corner. That was the left over space after everything else was put in position.

While trying to shrink the laundry space, various combinations of main bathroom, second bedroom and laundry were trialled.  Eventually, Libby settled the laundry back where it started, but smaller with a chunk taken out of the house outline.

Now the tricky bit – getting the kitchen to fit.

When David dropped by for a meeting to review the plans, we were feeling quite pleased with our review.

The laundry modification was a no-brainer.  David suggested we keep the external house dimensions the same and simply have a covered area just outside the laundry.  With a carport nearby, that would give us space to unload items from the car and keep them undercover.  Perhaps this area could have space for some doing outdoor jobs – workbench, tool storage, etc.

Swapping the lounge and dining areas also went over well.

Now for the tricky bit.  David had us all up and moving with measuring exactly how much room we’d need for the lounge chairs on one side and an appropriate space for a dining table plus chairs on the other.  After wielding the tape measure and seeing exactly what the gaps would be, we highlighted an obstacle.  That obstacle was a kitchen bench (sink, dishwasher, storage).  The plan was to have this centrally located, looking out the northern windows.

Staring at the drawings, we realised we had created a roadblock in the centre of the open area where everyone in the house would spend a great deal of time.  We could move things out of the way when necessary but that didn’t sound like much fun.  Shifting chairs would get annoying and who wants to design annoying features into a house?

David then said, “What about we make the kitchen bench an island?”  Initially, we thought that it was already an island but that wasn’t what he meant.  He quickly sketched an organic, non-rectangular shape that fitted into the available space.  His idea was to create a shape that met the utility requirements for the bench but allowed people to flow around it as they moved around the open area. Since he was building the bench, he could make it whatever shape was appropriate.  Brilliant! Why should a bench have to be rectangular?  We jumped at the idea.  Apparently, we were the first clients David had who have responded positively to this suggestion.  Others have stared blankly at him and then gone back to the rectangle.

After that break-through, the kitchen area quickly took shape, albeit one with more organic shapes for the main features. There is a definite continental drift theme with the kitchen benches linked by complimentary shapes.  The other bench with the stove top, fridge, freezer, pantry, etc would have some curves that mirrored the island bench.  Since we’ve asked David to make us the dining table, there is also the opportunity to have an appropriate curved shape there was well.  Rectangles be gone!  The whole area would have a consistent theme – attractive woodwork and curved shapes. The shapes are designed to make it easy to live in the space, rather than use standard shapes that we have to put up with.

On that note, our meeting finished on a high.  Everyone is feeling as though we are creating something quite special.

We’ll give you a sneak peak at the new layout in a future post.