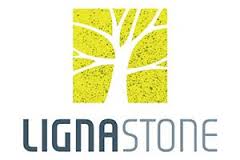 After hearing David sing the praises of LIGNASTONE and Timbercrete, we decided a LIGNAGROUP site visit would be a good idea.  Tony, the company’s Managing Director, kindly agreed to show us the range of products made at their factory in Ferntree Gully.

Early in our conversation with Tony, we were keen to find out the difference between Timbercrete and LIGNASTONE.  There isn’t a great deal.  Timbercrete has been around for about 15 years but Tony has evolved the product into LIGNASTONE.  The upgrade has taken the idea into a more finished look with a greater variety of potential uses.

The recipe for LIGNASTONE is really quite simple.  Start with waste wood material from a Victorian lumber mill, add some sand, cement, water and a few special ingredients.    Of course, years of experience have gone into this recipe and how to mix the materials to obtain the optimum result.  Don’t try this one at home kiddies! 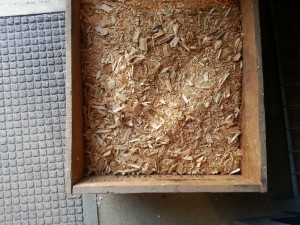 The wood/sand/cement mixture is placed in a mould and settled to remove air pockets.  On a hot day, the time spent in a mould can be as short as 10 minutes.

Next, the block is left on a drying rack for a couple of hours.  After the initial drying period is over, the blocks are stacked on pallets.  Further drying occurs over the next 2-3 weeks.  In the next photo, there are a couple of pallets of LIGNASTONE blocks standing behind the standard cement materials.  The reddish blocks definitely stand out amongst the crowd. 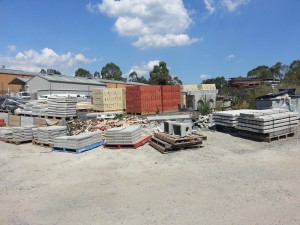 The last stage of the manufacturing process actually occurs at the customer’s site.  To minimise shrinkage in a finished wall, the LIGNASTONE blocks must be left to cure for 3-4 months.  After that, they’re ready for use.

There were several factors in the manufacturing process that impressed us.  LIGNASTONE is made locally – just down the road from our site so there aren’t many carbon-kilometres involved in delivery.  There is minimal energy input to the process with sunlight playing a major role.  Much of the raw material is a by-product from a managed forestry operation.  The carbon in the waste wood is locked away in the LIGNASTONE, rather than being released back to the atmosphere when the waste is burned.

Given that a large percentage of each block is wood, another advantage of LIGNASTONE is that it is much lighter than a standard brick.  However, they are just as strong.

What can LIGNASTONE be used for?

Our main interest in LIGNASTONE is an alternative to bricks in a reverse brick veneer wall.  The aim is to keep them at a constant temperature using a combination of their insulation and thermal mass properties.  In summer, the exterior cladding and insulation layer will protect the blocks from the hot air so the internal temperature will remain comfortable.  In winter, the reverse applies.  Minimising heat leakage through the wall means we will be able to maintain a pleasant indoor temperature with the in-floor hydronic heating operating only on the coldest nights. 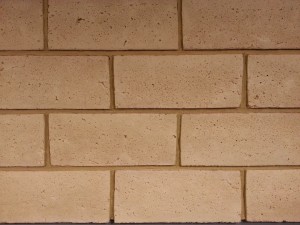 Looking at the display panels, we liked the sandstone colour and the cobblestone shape.  Cobblestone blocks have a less finished look to them which fits with the natural material theme for the house design.  The colour and texture of the blocks is so good that we aren’t planning on covering them with plasterboard.

If we want to have some feature sections on the wall, it’s possible to have the LIGNASTONE blocks moulded into rough hewn shapes.  The feature shapes could be an eye-catching addition to a few corners.

On the way out, we noticed this display showing the LIGNASTONE party trick. 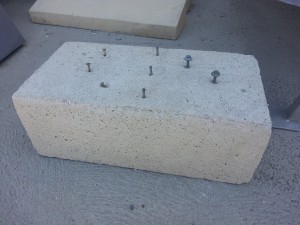 It’s possible to hammer nails or drive screws directly into the block.  There’s no need for special drill bits or fancy fittings.

Thanks to Tony, we had an informative and entertaining tour.  Time well spent that gives us confidence with using this innovative building material.