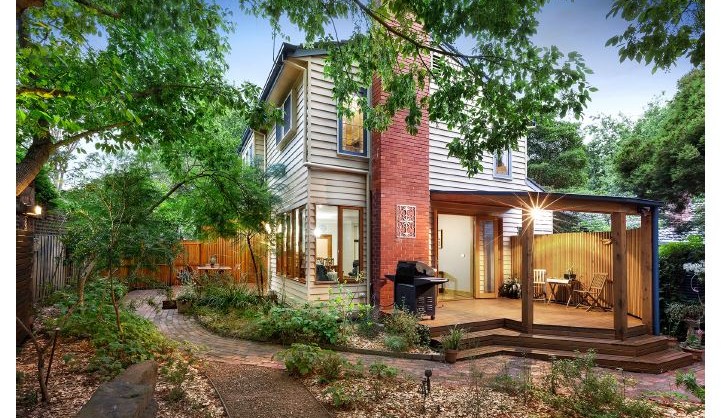 One step closer with a successful auction

“Sold!” yelled the auctioneer and that closed the chapter on 14 years in this house.

It all seemed so logical that we should sell this house as soon as we could.  It would assist with cutting the cost of financing the green home build.  However, it was with mixed emotions that we heard the auction reach a successful conclusion.  Initially, there was the relief that we wouldn’t have to continue getting the house ready for buyer inspections.  There was always a rush to get the rooms looking their best and running around the garden sweeping up stray leaves, pulling out any offending weeds, etc.  Not to mention putting things out of sight and then not remembering exactly where they were.

The feeling of relief was quickly tinged with nostalgia for what we had achieved, taking the house from an ordinary two storey weatherboard house into a home that was more sustainable in the way precious resources were used.

So, before we move on, here’s a few of the ‘things we did’ to the house.  Libby would say that quite a few of these things occurred during school holidays when I was looking for a little project to take my mind off school work.  We learned a lot along they way but feel we have reached a natural endpoint with what we could achieve with this structure.  Going further will require starting with a clean slate in our green home build. 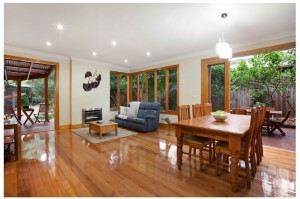 Living area renovated by David to bring more light into the house, but use double glazing to control heating/cooling costs.

When we first started getting interested in making better use of the various resources consumed in the house, we received some sensible advice that we’ve been following ever since.  Essentially, no matter where the electricity comes from, we were told the best thing to do was to minimise consumption.  Think about where it was going and consider if the consumption was warranted.  If electricity was being used for a good purpose, then think about ways of achieving the same aim but by using less energy.  Over the years, we managed to reduce our average daily power consumption to 6-7 kWhr by following recommendations for eliminating standby power, replacing lights, …

In 2007, we heard that some people were doing something cutting edge – installing solar panels on their roofs.  They were becoming micro-power stations or embedded generators.  After a bit of investigation, we arranged for Energy Matters to install a 2kW system on our roof.  Being at the cutting edge wasn’t cheap but we felt that it was the right thing to install the largest system we could afford.  Fortunately, the government helped to defray the cost with their rebate scheme and, later, they introduced a generous feed-in tariff to encourage others to come on board.

Though, on paper, our solar power system wouldn’t be an investment giving a competitive return, it is quietly working away on sunny days, pumping electrons into the grid.  Just out of interest, Libby worked out that we haven’t paid for electricity in the last 4 years, given that our feed-in tariff payments exceed our consumption from the grid. 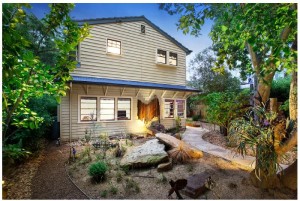 A weatherboard house with a few sustainability tricks inside.

By renovating various rooms and installing insulation, our gas heating bill started to decrease.  The biggest change occurred when we replaced the gas hot water heater with a solar system (gas boosted).  Not paying to keep 200 litres of water piping hot caused a step change down in cost.  Although not as significant, replacing the old ducted heating unit with a higher efficiency, variable speed unit was another change for the better.  Putting double glazed windows into the living area renovation helped keep the heat inside the house during winter.

Now we have discovered how much it costs just to be connected to the gas supply system.  Most of our bill is simply the service fee.  It has highlighted the need to question which energy source or sources we should consider for our green home development.  Even with super efficient gas appliances, we are never going to get below a threshold payment of the service fee.  Hence, our decision to select electricity as our sole energy source.

Water – coming in and going out

We started our water conservation drive with the largest plastic tank that could be carried down the side of the house.  Weight wasn’t the problem – just the physical size that could be accommodated.  After a few years, the 4500 litre tank was joined by a second.  They supply rain water to the toilets, laundry and the watering system for the back garden.

Other water streams were diverted to the garden.  A bit of piping, a plastic tub and some garden spray tubing were cobbled together into a grey water diversion system for the laundry water.  Something more professional was installed to cope with the water from the ensuite shower.  By all accounts, we did well to keep the shower water system going for 6 years.  By now, the manufacturer no longer exists so spare parts aren’t available.  Our purple pig is out of service.  There is a lesson to be learned there – grey water is a tough gig for pumps and level switches.  If we have to use them in the next design, I’m going to make sure that we have simple designs that include readily accessible parts from stock standard suppliers.

Since gardens can often be a big water consumer, our final water conservation activity was linked to a garden renovation.  David and his crew stripped the garden back to the basics and then rebuilt it with a native plant theme.  There is a drip-watering system to give the plants just enough water when they need it.  The finished garden brings us a lot of joy.  It’s a prototype for the sort of garden we are hoping to create at the green home build.  Every room is going to have something interesting to look at and the outside is going to blend with the inside. 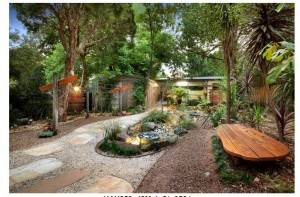 David created a garden, full of interesting features, that welcomes us and many native bird visitors.