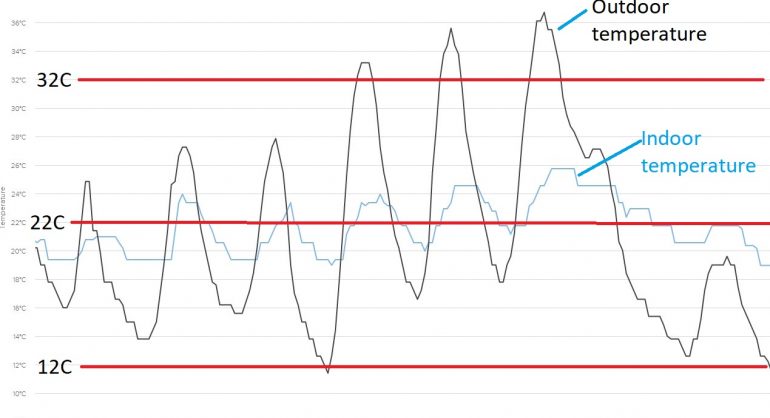 When anyone asks what is special about the passive solar design for our home, I reply, “The house wants to stay warm in Winter and cool in Summer.  It doesn’t rely on air conditioning to keep indoors comfortable.”

Our air conditioner kindly provided an opportunity to fully test this philosophy.  During a series of cold, cloudy mornings in November, I occasionally used the air-con to warm the living area.  In return, it occasionally worked.  Turning the air-con isolation switch off and on again worked a couple of times, usually when the repairer was here to fix the problem.  However, when off/on stopped “fixing” the problem, the repairer finally discovered an issue.  He ordered a replacement part but it won’t arrive until mid-January.  No chance of any heating or cooling from the reverse cycle air conditioner for a month!

Now Summer has finally arrived in Melbourne.  I’m sure many households in this situation would be preparing to sweat through the long, hot Melbourne days.

Alright house, show me what you can do without mechanical cooling as a back-up.

The Your Home website says the benefits of a passive solar design home are “a lifetime of thermal comfort, low energy bills and low greenhouse gas emissions.”

This diagram shows the key design features which achieve that objective.

Our interior thermal mass (concrete slab and Timbercrete bricks laid as reverse brick veneer) stores warmth or coolth.  Excellent insulation (wall and ceiling plus double glazed windows) restricts heat flowing in or out of the house.  Thermal mass plus insulation prevents the indoor temperature fluctuating as the outdoor conditions change.

In Summer, the Sun is high in the sky.  An eave running along the northern roofline shades the windows and prevents sunlight striking the floor and walls.  We don’t want direct sunlight heating the interior thermal mass. At night, we vent any warm air that builds up in the rooms during the day using natural ventilation through purpose built windows.

In Winter, the Sun is lower in the sky.  It provides a useful heating source because sunlight passing through the large, north-facing windows warms the thermal mass.

Unless the house has a NatHERS 10 Star rating, mechanical heating from an air con (or gas fired heater) is required.  Extended periods of cold, cloudy Winter days saps the energy stored in the thermal mass.  Heating tops up the warmth in the thermal mass and the insulation limits how much is lost through the walls and ceiling.

In Summer, day after day of hot weather with a high overnight temperature limits the opportunity to cool indoors using natural circulation.  In this case, the heat pump (reverse cycle air con) removes heat and keeps the interior temperature at a comfortable level.

This view of the house, taken before the garden grew, shows the north facing windows and large sliding door in the living area.  The extended eave shades this entire wall throughout the day.

The mid-Summer shadow line is obvious when standing on the deck and looking back at the sliding door.  Sunlight never gets closer than half a metre from the glass.  Speckled shadows in the picture come from the deciduous grapevine that is gradually covering the pergola.  This temporary addition to the eave is a benefit during the transition from Summer to Autumn when the Sun is lower in the sky.  It stops sunlight hitting the slab during the increasing number of hot, sunny days during March and April.

From the other side of the sliding door, it’s obvious how the slab is protected from direct sunlight.  This ensures the interior is light-filled but not heated by the Sun.

December 25 is a good example

The chart shows the house doing its thing, along with some assistance from us opening and closing windows.

Before going to bed on the 24th, we opened the windows for natural circulation.  A gentle breeze flowed through the house overnight, cooling the interior from 23oC to just under 20oC.  Meanwhile, the temperature outside dropped to 12oC.

First thing in the morning, we battened down the hatches by closing every window.  By midday, the outdoor temperature reached the 33oC maximum.  However, our home’s thermal mass and insulation limited the maximum indoor temperature to 24oC.  Given we had visitors for Christmas lunch, we turned on the ceiling fans to counter the heat load from extra bodies.  Airflow from the fans was enough to keep everyone comfortable.

That night, the cycle continued.  Opening windows for natural circulation vented warm air and prepared the house for another hot day.

December 27th was the hottest day in this patch of Summer weather, peaking at 37oC.  Venting the night before cooled the interior but the average indoor maximum temperature was climbing.  Day after day of high temperatures gradually warmed our thermal mass.

On the night of December 27th Melbourne didn’t get a cool breeze from the south.

There’s no benefit opening windows if the minimum outside temperature (27oC) is warmer than inside (25oC).  We simply ran the bedroom ceiling fan for an hour or so while dropping off to sleep.

As soon as the cool change arrived mid-morning December 28th, we opened the windows and started venting.  The cool breeze cooled our living area down to 23oC.

Getting the best out of a passive solar home doesn’t mean the residents are passive.  We help the house do its best work by watching the weather forecast and responding accordingly.

The forecast for December 29th was for a cooler, cloudy day.  We’d used the cool change from December 28th to drop our indoor temperature to 22oC.  With a cooler day coming up, it didn’t make sense to open windows overnight and further reduce that temperature.  The chart shows the maximum for December 29th was only 19oC (compared to 37oC two days earlier) but, inside, we stayed at 22oC.

And so the process goes on.  Knowing December 30th was going to be a hotter day, we opened windows the night before and cooled the house in preparation.

Over three days, the outdoor temperature fluctuated from 11 to 37oC but indoors drifted between 19 and 26oC.  Remember, that’s without an air conditioner, just ceiling fans and natural air circulation.

According to Your Home, up to 40% of a standard home’s energy bill goes towards heating and cooling.  That’s a big chunk of energy and, if it’s imported from the electricity or gas grid, a scary cost of living expense.

Clearly, in December, the amount of energy we used for heating & cooling was minimal.  The reverse cycle air conditioner was out of service for most of the month.

Despite the lack of an air con, the data (and our experience) shows the house stayed comfortable.

So, what was the December energy bill for an all-electric home plus an electric vehicle?

The 8kW solar panel array produced slightly more than 1MWh for the month.  Some of that power went into the battery to power the house overnight (when the sun doesn’t shine).  The rest went to the electricity grid to earn a feed-in credit.

We imported a grand total of 8kWh from the grid to cover situations when the solar power inverter wasn’t quick enough to respond to a sudden change in load (eg induction cooktop setting increase).

Our December energy bill, for house and car, came to a tiny $0.75.  That’s what you get subtracting the feed-in credit from the electricity bill (imported power plus connection fee).

Finally, it’s worth reviewing the opposite case – using the Sun for heating in Winter.  Remember, that’s when the Sun is lower in the sky so sunlight hits the concrete slab, warming the thermal mass.

Note the shadow line is now well and truly inside the living room.

Let’s review a few days to spot when sunlight replaced the air conditioner.

July 18th was a standard cold, cloudy Melbourne day.  The outside temperature peaked at 11oC.  I kept indoors comfortable by running the air con on standby at 16oC overnight and then increasing the setpoint to 21oC during the day.

Starting on July 19th, we had a run of 4 sunny days.  Anyone sitting in sunshine on a cold day knows how much warmer that feels. The same is true in a passive solar home.

With sunlight streaming through the north-facing windows, I turned off the air conditioner in mid-morning and left it switched off until late-afternoon.

Look at the impact of sunshine on the indoor temperature.  Despite having no air con, the temperature in the living room rose to almost 22oC, warmer than the previous days when we used the heater.  For those 6 or 7 hours, the Sun heated our home for free!

Observations from the December experience

Our experience confirms that passive solar design is an excellent starting point for creating a comfortable home in Melbourne.

With a little assistance from the residents, the house needs minimal energy for cooling and heating.  A reverse cycle air conditioner is useful for extended periods of hot/cold weather but not essential for day to day comfort.

Less use of mechanical heating or cooling reduces a household’s energy consumption and costs.

If the required energy is supplied from solar panels & a home battery, the monthly energy bill decreases further.