Indigenous gardens – back to basics

A free talk about indigenous gardens given by local experts was a treat too good to resist.  Once again, the City of Whitehorse Sustainable Living Week had delivered a timely service for our project.

Given that we are using an indigenous plant theme in our landscaping, I was keen to listen to gardeners who were experienced in this approach.  The talk was held in the information centre at the Yarran Dheran Reserve.  During the talk, I discovered this particular part of the countryside was almost untouched by local development.  It was a remnant from the early 19th century .  “Ah ha,” I thought, “this is a great starting point for visualising our garden.”

Anyway, back to the reason I was there.  I wanted to know what sorts of plants were recommended for an indigenous garden and how best to prepare the area for planting.

Horses for courses with a mixture of indigenous and native plants 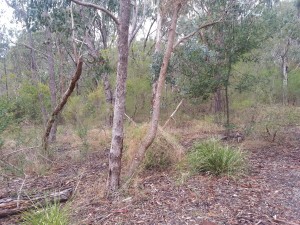 The folks from Greenlink provided an overview of the many indigenous plants available at their nursery.  However, they said that while indigenous was best, there were reasons why some native Australian plants could or should be put into the mix.  One reason was to add a greater variety of colour.  Native species (eg Grevillea) add a prominent splash of colour not seen in the indigenous plants and are also bird attracting.  Another thing to consider is the size of mature indigenous trees.  A 10-15 metre tree can be too imposing on a smallish plot, as well as requiring a 10-15 metre diameter circle for its roots.  Smaller native trees could serve the purpose of an upper storey in the vegetation without being quite so dominating.

Planting a mixture of trees, shrubs, grasses and ground covers seemed to be the way to go.  Putting in a frog pond would provide an opportunity to recreate something like the local stream, as well as encouraging native animals and birds to visit.

Maintenance of an indigenous garden seemed quite straightforward.  The occasional pruning of shrubs and trees was recommended.  Once the plants were established, their water requirements would be quite low as they have evolved to cope with extended dry spells.  Any watering should be done as an occasional deep-water to encourage the development of deep root systems, rather than frequent short watering which tends to lead to shallow rooted (and vulnerable) plants. 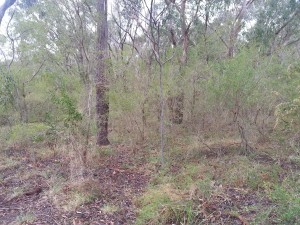 Mix of trees, shrubs and grasses in this area of the Reserve.

In life, good planning and preparation will usually lead to a successful outcome.  The same is true when starting an indigenous garden.

Well before the planting plans are finalised, 6 to 12 months before, the ground has to be weeded and mulched.

Getting rid of invasive weeds is crucial as they compete with the indigenous plants, often crowding them out and just looking “wrong” in the garden.  Looking at our block, I suspect this is going to be a challenge.  There are large patches covered with various creepers (eg ivy) that look well established.  I’m thinking they aren’t going to be too happy about being removed.  Fortunately, the folks at the City of Manningham have produced a booklet all about weeds (Weeds – Identification and control of common weeds in Manningham).  It’s a handy reference which is going to get quite a workout in the next few months.  Dare I say it, but Weed War I is about to break out!

With the invaders out of the way, the next step is to cover the ground with 50mm of mulch.  Because this is such a large amount of material, the suggestion was to see if a local tree lopper could supply the mulch from their operations.  The price would be cheaper than buying from a commercial source (eg Bunnings) but there is the risk of getting some weed seeds coming along for the ride.

Once the mulch is in place, it’s a matter of regularly removing any unwanted plants that pop up.  As the mulch breaks down and settles, it provides an ideal environment for the indigenous seedlings.  Starting with the 50mm depth should keep the garden in good shape for another 3-4 years before a top-up is required.

One other thing I took away from the talk was the resources provided by local councils via their websites.  I’m definitely going to be using this information for planning our indigenous garden.  For example, the City of Whitehorse has a mapping function that will list suggested indigenous plants for that area of the municipality.  Although this particular map doesn’t cover our new location, I am sure it will be a useful guideline.

Plenty of good ideas and lots to think about.