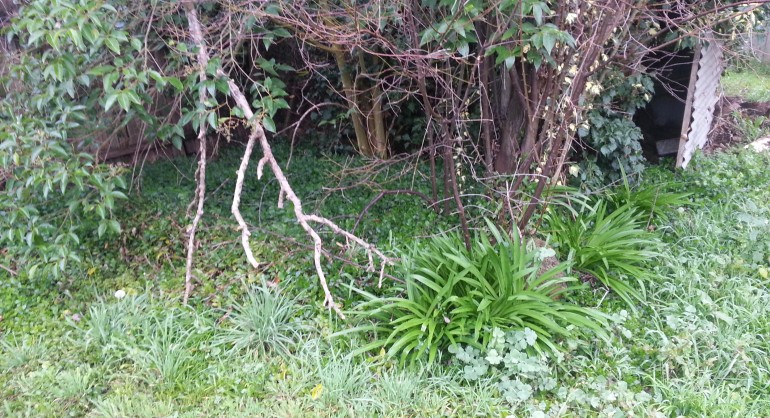 From urban wasteland to native bushland

A good imagination is required to see how we get from the urban wasteland that is our current back garden to the finished native bushland themed landscape that will complement the new houses.

However, somebody once said something about a long journey beginning with the first step.

There are two particular weeds which I suspect will give us trouble and likely be the focus of attention for some time. 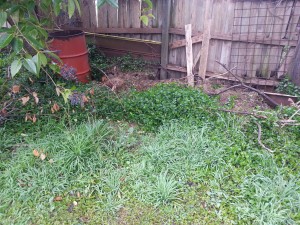 One of the many patches of Trad flourishing in the back garden.

First, there is good old Trad (aka creeping Christian, wandering Jew, inch plant, spider wort, wandering Willie, … )  According to Weeds of Australia, it was brought here from South America as an ornamental garden plant.  Like many other flora and fauna tourists, it liked Australia so much it’s now trying to take over the place.  Removing the stuff is tricky as it breaks apart when you even think about pulling it out of the ground.  The remaining root system simply sprouts and away it goes again.  There is another little trick that Trad likes to play.  There’s a good chance that any broken bits dropped on a suitable patch of ground will also sprout.  Unless all sections of the plant are cleaned up, the infestation just spreads. 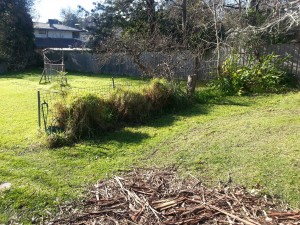 Kikuyu doing what it does best – taking over the garden and heading for the sky.

Next on the list is Kikuyu grass.  Herbi-guide explained the grass was brought to Australia from Eastern Africa as a lawn grass and pasture feed.  The good news is that it provides fodder on farms and works a treat on racecourses because it recovers so quickly after being trampled by horses’ hooves.  On the other hand, Herbi-guide reports that Kikuyu forms dense mats and smothers most other species.  As a result, it is listed as one of the “world’s worst weeds of cropping” and referred to as a “garden thug”.  Strong words indeed.

Using the greenhouse effect for good, not for evil.

For now, the plan is to avoid using herbicides to kill off the weeds.  I’m concerned about the residual effect of chemicals on the new garden.  It’s probably not an issue, but I have some time on my hands.  Why not commune with Nature and get to grips with the plants by pulling them out?

Given that both weeds are runners and tough customers, I figured something special would be required to deal with them once they were out of the ground.  Normal composting would probably just encourage them to grow.

Hence, the plan to cook the plants in their own juices by covering with plastic.  The Trad gets a bit of extra treatment by spending this time inside a plastic bag under the plastic wrap. 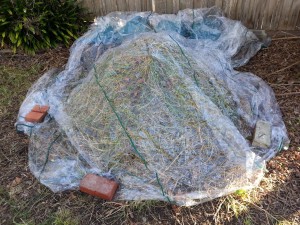 Sunlight on the outside plus humidity on the inside should kill the runners.

Along with the low tech trial, a couple of compost containers are being used.  I’m keen to see if a tumbler can do the job on Kikuyu runners.  The drum filled quickly so it won’t be a way to deal with the large quantities being pulled out of the garden. 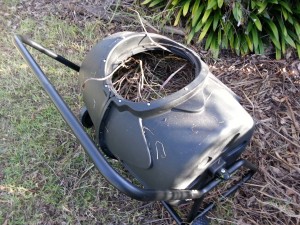 Testing a tumbler compost bin to see if that can kill then compost Kikuyu.

A standard compost bin is being used to collect and compost any materials that don’t have runners. 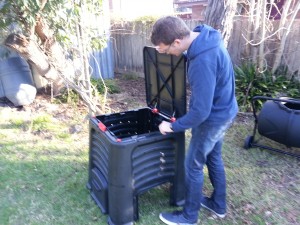 Assembling a standard compost bin for organic materials that won’t find the conditions ideal for sprouting.

Although I am concentrating on two weeds for now, there is one more that will take quite a bit of work to eradicate.

Ivy arrived in the garden decades ago and has established a firm foothold in this ecosystem. 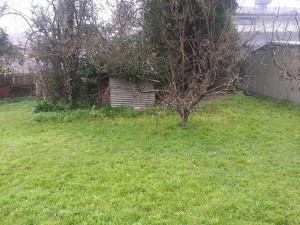 Deciduous tree is green in winter due to ivy infestation

That tall, green leaved tree to the right of the old shed is actually a deciduous tree.  In the middle of Winter, by rights it should have bare limbs.  Unfortunately, it is infested with ivy.  The runners going up the trunk are as thick as my arm.

How do I know that this battle isn’t going to be won easily?  Several weeks ago, I severed all the main runners going up the trunk.  We’re not talking just a single cut.  I removed sections from the runners so there was an air gap – no way were the ivy roots connected to the upper sections.  Did this make a difference?  Not in the least as far as I can tell.  The ivy leaves are still as green and healthy as ever.