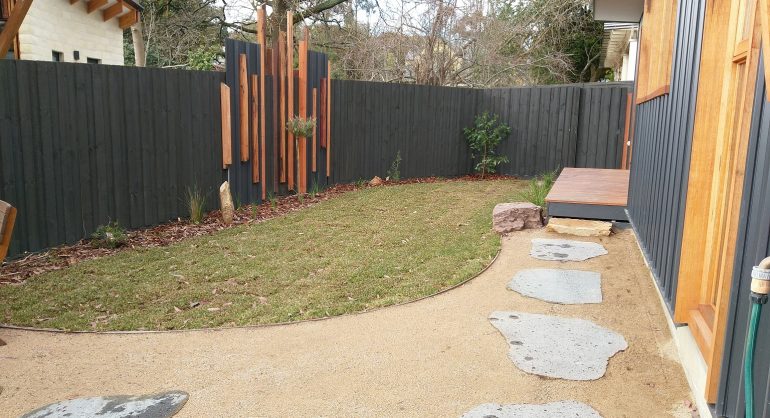 Although we finished landscaping our second home a while ago, things like a pandemic and getting ready to sell 23 Alexandra Road have kept me away from the keyboard.  Time to right that wrong with a story about the team turning a construction site into an indigenous garden.

Landscaping is just a dream.

As 23A construction wound down, our thoughts turned to landscaping what was essentially a worksite.  If anyone is wondering where 23A came from, let me explain.  Our subdivision shows the postal addresses for the three properties as 23 (house at the front), 23A (second home) and 23B (home at the back).  Number 23B is our final destination and the one that started all this.

A line of holes punched into the ground next to 23A hinted at the location of the north facing deck. This connects the family room with the back garden via a large sliding door.

Looking towards 23B showed the so-called garden area was still a useful spot to store deliveries.

The mound of bits and pieces extended almost to the back of the house.  Visiting excavators often used the future garden space as a parking area.

Things weren’t much better out the front.  Hard to picture a finished driveway and landscaping in this situation.

A long walk, as they say, begins with the first step.  In this case, our landscaping journey began by clearing the site.  The crew piled up everything not nailed down or useful to sort for reuse, recycling or disposal.

At this point, the site toilet and “bathroom” had to go.  The toilet was built exclusively from materials reclaimed from the old house, right down to the glass door from the living room entrance.  For over two years, it faithfully met the needs of everyone working on the site.  However, we had a garden to create and the crew now had access to indoor plumbing in the second home.  Luxury!

Taking away the clutter clarified the situation. So that’s where the garden will go!

The northern wall of 23A emerged as well.  For the first time, we could stand back and admire the reclaimed timber window surrounds. The surrounds are a bit like adding mascara to the window frames to accentuate the home’s “eyes”.

After Libby explained her landscaping ideas, Dan (Terra Firma Creations) and David put their heads together to come up with a simple, but effective, design.

Playing around with garden bed edging was a good start with defining beds and lawn areas.  Everyone used their imagination to ignore the big, black tanks that the plumbers were storing in the backyard.

Putting up the fence was a big step forward in defining the available space.  The boundary was no longer an invisible line.

Of course, it wouldn’t be one of our landscaping projects without a quirky feature or two to catch the eye.  Down the back corner, there’s a combination of large rocks and upright railway sleepers.  Libby commissioned Wozbits to create a couple of found-object bird sculptures to populate the sleepers. They’ll arrive later this year.

A simple privacy screen becomes something special when David builds it from leftover steel cladding and reclaimed timber. The naturally oiled timber stands out against the painted paling fence. We use a colour called “treacle” for the fence, rather than the “monument” colour of the cladding. From a distance, they look similar. However, put them next to each other and it’s obvious that monument has a slightly blue/purple tinge compared to the brownish base in treacle.

We hadn’t forgotten about the entrance, but the backyard remained the focus.

Final touches on the landscaping.

Towards the end, the team let us loose on planting and mulching.  Just like our first garden, the theme is mainly indigenous.  We sourced most of the plants from the local CRISP nursery, along with a few grevilleas from the Kuranga Native Nursery. Grevilleas are our version of gardening bling. They have dramatic foliage, wonderful flowers and attract birds.

And then the mulch arrived.  Seven cubic metres of freshly chipped gum tree.  However, there was not time to stand around and admire it.  The easiest place to dump the load was on the access way to 23B.  If we didn’t get it out of the way quickly, we’d be holding up our own project.

Whew! Mission accomplished.  We spread the pile around the 23A and B gardens within one day.

After Dan laid the turf, the job was essentially done. The rainwater tanks were removed, but the carpenters had yet to take away their sawhorse.

Garden is settling in.

After a few months, the landscaped area is losing its “just finished” look.  I suspect the indigenous plants are biding their time, waiting for Spring before starting a growth spurt.

The landscaping complements the style of the home – a mix of new and old, as well as unusual uses of materials. For example, a flat rock from the landscaping supplies became the step at the end of the deck.  The garden is an inviting, open space that should be a pleasure to use.

The view from 23B on the other side of the fence confirms the sense of seclusion. Occupants won’t have to worry about the pesky neighbours at the back (that’s us).

We kept the front entrance clean and simple with garden beds lining the driveway.  Over time, the plants will grow and stand out against the timber and steel cladding.

High hopes for the future.

Based on our experience with using indigenous plants in the first home, we are confident of similar success in this garden.

This photo shows the front garden just after completion in June 2019.

One year later, it’s obvious the plants are thriving.

Achieving the same result in the second garden will create a special place for the home’s occupants and local wildlife.