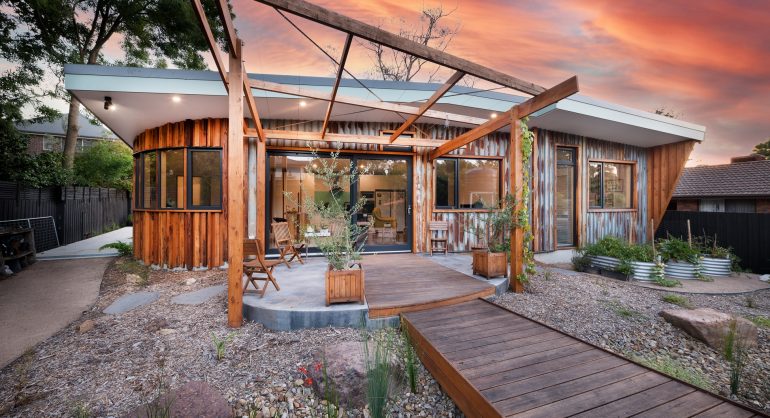 Two landscaping projects done and one to go.  When we started on the site development, one of our objectives was completing the gardens as soon as possible after house construction.  New houses surrounded by weeds and patches of compacted earth look so sad and untidy.

Proper landscaping that complements the homes adds character and appeal.

The front garden for #23 became a well-established patch of native bushland gradually screening the house from the footpath.

The back garden in #23A is the landscaping feature, providing a private open space for the occupants.

23B landscaping has more area to work with.

As the build neared completion, it was easier to see the extent of the blank canvas that would become the garden.  This site has a larger area so we considered combining the best of 23 and 23A.  Provide patches of native vegetation for the local wildlife.  Create an open area for entertaining and a space for grandkids to play outdoors..

The stretch of land next to the fence was reasonably flat so this would be ideal for a garden path connecting the driveway to the shed.

From the back of the house the land sloped downwards to the boundary fences, so the landscaping would have to raise and flatten some parts to provide usable areas.

Looking back towards the house, we could see where the deck leading off the large sliding door fitted.

First task was moving earth around to make a flat area.

Next, the excavator carved out a dry river bed running through the garden.  This idea surfaced after several discussions about ways to add interest.  A standard flat garden area did not ignite our imagination – too manicured and artificial.  David and Dan felt we could do something more natural looking with the available space.  And so, the river bed concept was born.

Preparing for a new fence.

Clearing construction materials and debris out of the site meant the time had come to remove the temporary boundary fence.  Our neighbours had patiently accepted a mesh fence for years so I think they were pleased to have a permanent replacement.

Before the fencing crew started work, there was one small job to do.  The remains of an exotic tree lived on next to the Swamp Gum trunk.  That was fine during construction, but a definite problem with it sitting on the fence line.  I’d tried several times to cut off every shoot and bud to kill the tree.  However, like the Cat in the Hat, it always came back.

Finally, I took the nuclear option and brought out the chainsaw.

It didn’t give up easily but, eventually, I cut out the entire stump.  No chance this tree was going to interfere with the new fence now!

So much fencing to paint …

After the crew installed the fence, we realised how many palings needed painting.  Fortunately, our friend Graeme lent us a paint sprayer so we didn’t have to use a hand brush on every square inch.  Even with the sprayer, the job felt like it took forever.  Day after day of mixing diluted paint batches, spraying and then coming back for a second coat.  The result looks much better than the bare palings so it was worthwhile.

As a final touch I moved the cow and calf rusted corrugated iron sculptures to the fence behind the carport.  They’d hidden away in the back garden for too long.

One unusual feature on the boundary fence is a section of wire mesh grid replacing some palings.  We wanted to give our neighbour Joan a place to grow her sweet peas and other climbers, as well as an opening for the occasional chat.  A tall wooden wall is not conducive to meeting and greeting neighbours.

Inspired by the fence wire mesh, we installed leftover concrete reinforcing mesh on the western wall of the house.  It’s a tough environment in Summer but we’re keen to try growing a productive climber like passionfruit.  If successful, the plant becomes a green wall shading the house and producing yummy fruit.

Deck and pergola connect the house and landscaping.

The rear deck was another concept that evolved during construction.  The plans specified a concrete deck curving around the large sliding door.  First change was adding a bit of colour to the mix so it didn’t look like a slab of concrete whacked on the back of the house.  Plain concrete might remind us older folk of a septic tank cover.

Next idea was running a section of timber decking through the middle of the slab.  The timber softens the concrete surface.

Finally, what’s the best way of getting from one side of the dry river bed to the other?  The obvious answer is a bridge, of course.  So, that’s what the team built.

As big believers in drying washing with the power of sunlight, our landscaping plans always included a well positioned clothesline.

Back when David renovated our house and garden in Blackburn, Libby asked him to design and build a clothesline similar to the ones our grandparents used.  Their simple, but effective, design was wires strung between moveable arms on two support poles.  The result worked well and added interest to the garden.

With that in mind, Libby asked David to create a clothesline inspired by his previous creation.  The new solar drier is a simpler design without the moveable arms.

First load proved the arrangement worked well.  When the washing is removed, the clothesline reverts to being a point of interest in the garden.

The 23B design uses a pergola and eaves to create shade in Summer.  It’s no surprise the pergola design wasn’t the standard based on right angles.  David’s design is perfect for allowing plenty of sunshine to sneak through to the windows in Winter.

All going well, a grape vine will cover the pergola’s roof to shade the deck in Summer.

As always, CRISP nursery sourced the many indigenous seedlings we put into the landscaping.  A significant difference to the previous gardens is adding a variety of fruit trees.  Libby wants a locally-grown supply of fruit for eating and making jam.  Hence, the plum, apricot and plumcot trees from Aumann’s scattered around both sides of the garden.

After planting comes the fun job of spreading mulch.  By now, we’re quite the experts.  Getting the load dumped on the driveway is always an incentive to move it quickly.  We impressed our landscaper Dan with the speed at which we moved the chip bark.  He was away for a while and expressed his surprise that the pile was gone when he returned.  We’d actually worked extra hard because Dan was coming back to take away his super-duper mulch moving shovel.

The finished garden is a credit to everyone involved.

Visitors walking out onto the deck are drawn across the bridge to the lawn.

Plants are settling into the dry river bed.  During heavy showers, we watch rainwater building up in the hollows, then soaking into the groundwater over a day or two.  Our son Ben did have an important question for us though.  “What happens to the dry river fish?” he asked when we excitedly announced the first puddles.  I expect those fish clamber to higher ground when the water floods their home.

The grape vine is steadily making its way up one of the pergola support posts.  Next year, the vine should spread over the support wires strung between the beams.

Fruit trees weren’t the only productive plants put into the garden.  In a future post, I’ll tell you about the wicking beds we built for the veggie patch outside the main bedroom window.