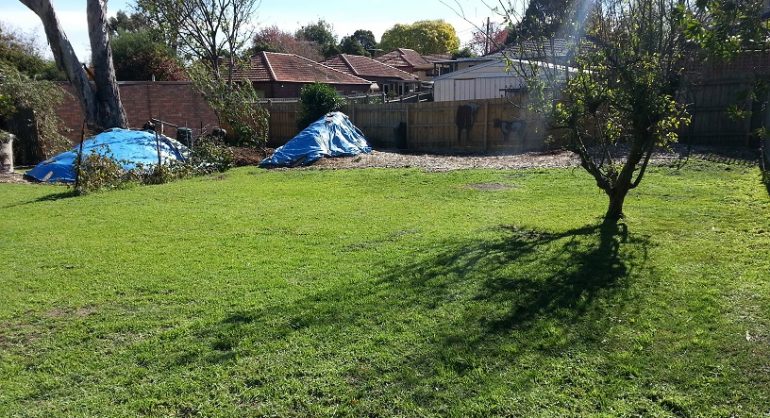 While preparing the landscaping plans for the planning permit, we noticed the strip of land along the back fence would remain undisturbed by future works. Enough said!  Why not get started on planting some seedlings?  They could happily settle into the area while construction happened around them.

We were obliged to put in some canopy trees to replace the ivy-infested Ash that was removed earlier this year.  Rather than limit ourselves to just those seedlings, we decided to put in the rest of the shrubs and trees specified in the landscaping plan.

Landscaping plan calls for a grove of trees.

After visiting local remnant bushland reserves, we’ve come to appreciate the beauty of the wild, natural appearance in those environments.  Nothing is manicured.  Plants compete fiercely for light and room to grow.  Clusters of trees and shrubs appear haphazardly.

We’ve decided to mimic that look and create a grove of trees and shrubs along the back fence.  Around the base of the taller plants there will be grasses, wild flowers and ground covers.  As in the wild, spacings between plants are more random with seedlings placed closer together than some might find comfortable.

The aim is to create a dense foliage along the fence that will provide a safe haven for the local wildlife, as well as a source of food. 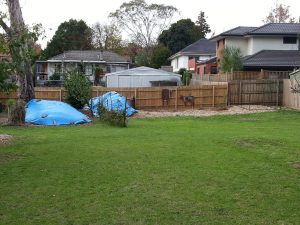 At the moment, this patch of land looks bare.  A layer  of chipped wood from the Ash tree protects the soil and reduces the chance of weeds taking over.

It’s a blank canvas, waiting for the arrival of the indigenous seedlings.

What happened to the ivy?

Fingers crossed, the ivy that covered the Ash tree hasn’t survived being run through a chipping machine and being roasted in the warm, dry conditions under a tarpaulin. 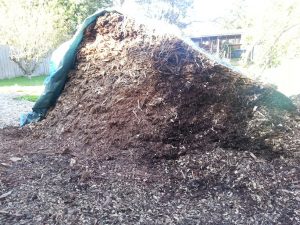 Digging through the pile showed no evidence of sprouting ivy runners.  Let’s just say I’m quietly confident of a victory.  However, we all know what happened the last time someone displayed a banner saying “Mission accomplished”!  Perhaps if we get through next Spring without any ivy popping up, I can declare the operation a success. 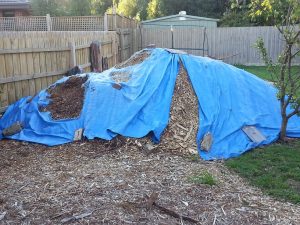 I wasn’t the only one interested in what was going on under the tarpaulins.  The local ravens and magpies appeared to like their chances for finding insects if they just pecked a few holes.  Given the size of one hole, a fox or two probably dropped by for a potential meal.  Even the wind wanted to tug at the covering to look at what was underneath.

When we purchased the seedlings, the friendly staff at the CRISP nursery advised us to wait until the Autumn rains had arrived before getting serious about planting.  So, our purchases loitered around the back yard for a while. 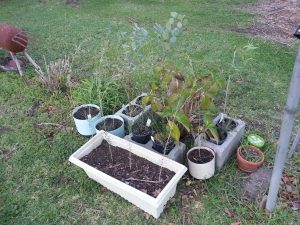 Note to self – Don’t leave tall seedlings in planter tubes for too long without water.  We nearly lost a few of them due to warm weather and me thinking they’d be fine for a couple of days.  Apparently not.  Fortunately Libby noticed the wilting so we transplanted them and most of the affected plants recovered quickly.

And then the rains arrived.  In went the canopy trees. 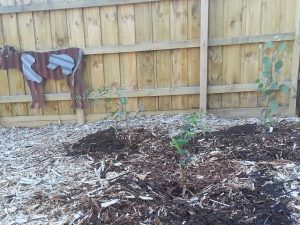 A canopy tree is one that grows to more than 8m in height, such as a Red Box or a Peppermint gum.  In our landscaping plan, we picked a location that wouldn’t put too much shade onto our future home.  Shading would affect the solar panels and reduce the amount of passive heating from sunshine in Winter.

Down in the back corner went a batch of Swamp Paperbark seedlings.  This is a low point on the property. Luckily, they won’t mind getting wet feet occasionally. 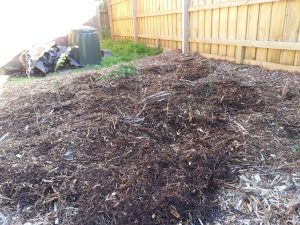 I’m looking forward to the time when we can clearly see the Paperbark trees.  At the moment, they’re just tiny sticks poking up through the mulch.

Some mulch relocation was required for the middle section of the fence. 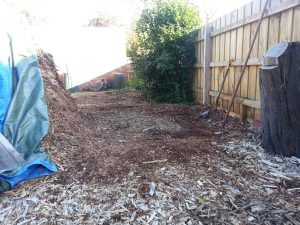 Then the Sweet Bursaria and Wooly Tea Tree seedlings went in. 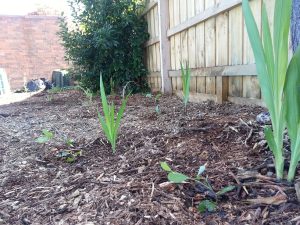 While waiting for the rains to arrive, I noticed quite a few bulbs sprouting in the established parts of the garden.  Since they were growing in places that are likely to be excavated when the new easement goes through, I thought I’d do them a favour and relocate them to the back fence area.

Hence, the tall, green leaves located next to the indigenous seedlings.  When the bulbs flower, they’ll add some colour & movement to the garden.  On the other hand, I hope I haven’t just introduced a virulent exotic species to the indigenous landscaping …  Meantime, they do serve as natural markers.  I can easily spot the tall leaves and avoid the nearby seedlings while working in the garden.

Gearing up for the Planning Permit.

After finishing this little landscaping job, our attention is firmly back on the paperwork for the Planning Permit application.  More on that later.