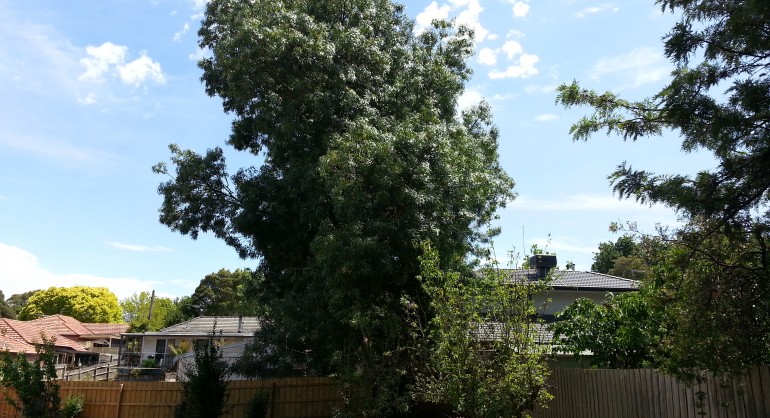 We like trees.  We especially enjoy the old ones that give a neighbourhood character and provide a refuge for native animals.  That’s what made it tough to go ahead with a tree removal.

The Narrow-leaf Ash at the north eastern corner of our property was the tree in question.

Why remove this tree? 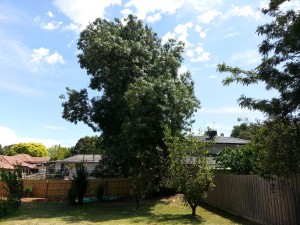 Why would anyone consider a tree removal?  The Ash had put a lot of time and effort into getting this big so why should the new owners even contemplate cutting it down?

That large shadow is the first of a few reasons.  During winter, the tree would shade the northern windows of our unit.  Less sun means less free heating on the concrete floors (thermal mass) so our energy consumption would increase as we used the hydronic heater to make up the difference.

Unfortunately, the tree was also infested with ivy. 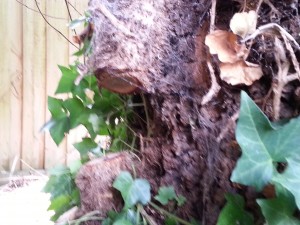 I’d tried cutting through the thick runners going up the side of the tree.  This made no difference at all to the ivy that gripped the limbs further up.  Much of the tree was covered with this vine.  Our concern was the ivy was slowly killing the tree.

Lastly, the neighbours at the back were both concerned about limbs falling off the Ash.  In one case, this would have caused damage to their house.

So, I apologised to the tree and asked for Council approval to have it removed.  The canopy will be replaced with native trees that we’ll be planting along the back fence.  These will be carefully selected to ensure they won’t grow too high to cause a problem with winter sunshine.

Tree removal.  How hard can it be?

We selected the crew from Logical Tree Management to do two jobs – remove the Ash and trim the Swamp Gum. 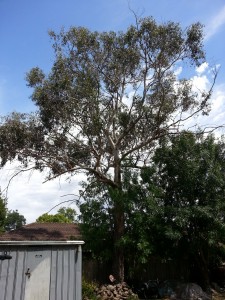 The Swamp Gum was staying.  All it needed was a “short back and sides” haircut to ensure it would remain healthy for a good many years to come.  Taking out the dead wood and any dodgy limbs would reduce the risk to life and limb for ourselves and our neighbours.

When the tree removal crew arrived on site, they stood around the Ash and sized up their opponent.  A quick look at the Swamp Gum indicated no particular issues.

Then, they went to work!

Apparently, the ivy infestation on this tree was bad, but not as bad as some they’ve worked on.  The main issue is having to ensure all the runners have been removed from the place where the branch is going to be cut.  Any uncut runners can prevent the branch from coming away cleanly, leading to a surprise for the man with the chainsaw who is dangling high in a tree. 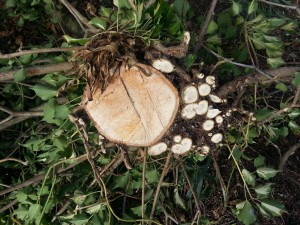 In our case, the ivy was clinging on so tightly it had to be cut away with a chainsaw. 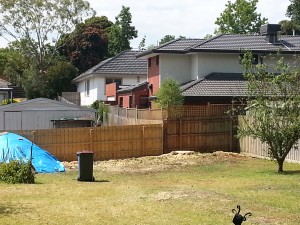 No free firewood for anyone in the street with this tree removal.  Everything went through the chipping machine. 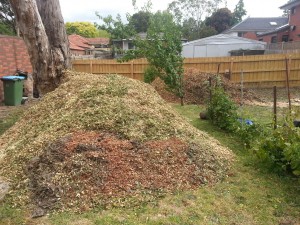 A thick layer of mulch is just the thing for preparing areas for native gardens.  Having this much material to work with means I can afford to be generous with how thick the layer is.

But, there is a problem.  Ivy is tough to kill, as I discovered with my attempt at ring barking the vine.  The concern is the mulch will simply provide the ideal environment for ivy fragments to sprout and flourish.

My plan is to cook the mulch piles for a few months by keeping them under wraps – no sunlight and no water.  I’m not sure what the internal temperature will do after the initial aerobic decomposition takes place. 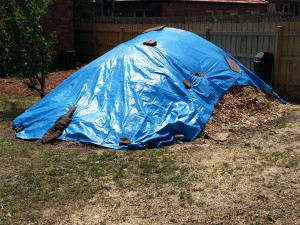 After looking at the size of the mulch piles, I decided a new wheelbarrow was in order.  My trusty old wheelbarrow wouldn’t be up to the job of moving mulch from the pile to where I needed to spread it.  The Bunnings vouchers I received at Christmas came in handy for this purchase. 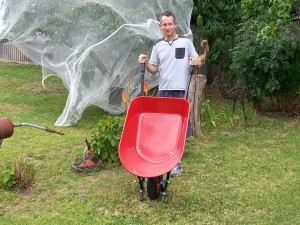 The major change to our back yard has come to the attention of our resident magpie family.  Here’s one member that I caught following me around as I tidied up.  There must have been a few disturbed insects for him to snap up. 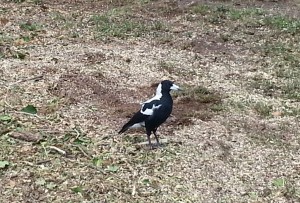 Once the autumn rains arrive, we’ll be planting the replacement canopy trees.  That way, they settle in and grow as we work on the house construction.