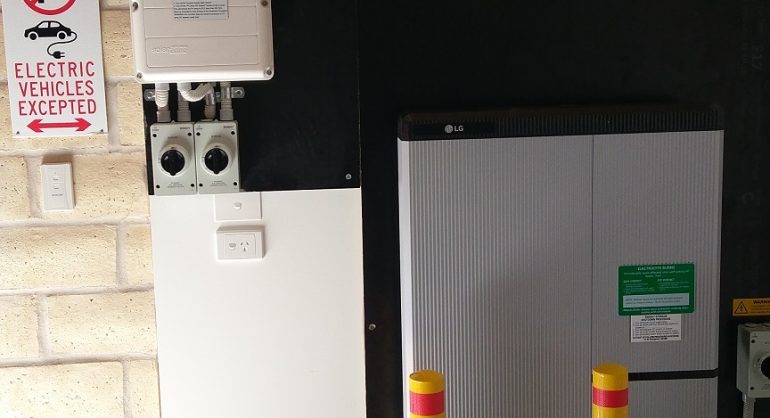 After the first winter in our all-electric home, it’s time to look back over the numbers and tease out useful lessons.  What worked well and contributed to our objective of minimising electricity imported from the grid? Did everything go according to our plan?  Were there any winter solar surprises?

I chose July as the basis to reflect on how a solar panel and battery combination fits with a passive solar home in Winter.

Our home-grown electricity comes from a 7.8 kW (nominal) solar panel array.  I say nominal because 14 of the 26 panels are mounted on the southern roof. Unlike the north facing panels, the south facing panels can’t reach their design capacity of 300W per panel.  However, since the roof pitch is quite shallow, they’re not too far off the mark.

The panels feed a SolarEdge inverter which is connected to a 9.8kWh LG Chem battery.  During Winter, the inverter operated in default mode of “maximum self-consumption”. It would always look for ways to use solar power in the home before going to export mode (eg put excess solar power into the battery).

July in Melbourne is not a great time for solar production.  The map shows we’re running at the bottom end of the scale.

To put this into context, those lucky folks in Darwin enjoy more than twice the amount of solar radiation at the same time of year.

The result is decreased production from our 7.8kW solar array due to low solar radiation and reduced number of daylight hours.

As the SolarEdge data shows, we imported 238 kWh (7.7 kWh per day) to keep the place ticking over.  The bill for July totalled $117 but that includes a $40 monthly service fee.

Before diving into where the electricity went, it’s worth reviewing the daily numbers for July to see if there are any trends.

There’s no surprise about how little electricity we exported in the daily import & export numbers.  Low production from the solar panels and an inverter set for maximum self consumption didn’t let many of our solar electrons loose into the grid.

The good news is that any excess electricity produced during the day went into the battery so we continued to use “solar power” after sunset.  Only after the battery went flat did we automatically switch to grid electricity.

Charging the LEAF is a significant load.

One could be tempted to ask why a low-energy house spikes above 20 kWh a few times in the month.  Doesn’t sound all that much like minimum energy. Well, those spikes show us recharging the Nissan LEAF.  After a busy day, the LEAF needs up to 15 kWh for its battery.

Given our solar panels couldn’t provide that much electricity, we charged the LEAF off-peak between 12am and 7am.  First cab off the rank was our battery, which happily met the car’s demand until it hit the minimum 10% capacity setting.  After that, the inverter switched to the grid and pulled in GreenPower electrons. Next morning, grid importing slowed and eventually stopped once sunlight hit the solar panels.

There were a few days in mid-July when the LEAF needed nightly charging after long drives so the importing numbers spiked.

Hence a significant percentage of our July electricity bill of $117 went into “fuel” for Libby’s car. Remember, we don’t have gas connected so that’s the only energy bill for the house. Not bad going for a month. It’s probably the most we are going to pay for energy as solar production increases in Spring and Summer months.

Heating is usually a major consumer.

Heating (and cooling) the average Australian home is the biggest single contributor to energy consumption, taking up approximately 40% of the energy “pie”.

Yes, we do use energy for heating in Winter but not a great deal.  A passive solar design with an 8.2 Star NatHERS rating means the Sun is doing much of the work, for free.  Outdoor temperature measurements show what the Sun can do.

Measurements on the shaded, south side of the house (light blue line) show July was a cold month with the temperature hovering around the 10C mark.  It’s a different story on the north wall (dark blue line). The sensor sees the Sun’s rays as they pass under the eave. I think temperatures exceeding 30C indicate how much energy comes through the large north-facing windows to warm the concrete floor (thermal mass).

On cloudy days, a 3.5kW Panasonic reverse cycle air conditioner does the Sun’s job of keeping a comfortable indoor temperature.

Extended periods of cold, cloudy days were a good learning experience.  We decided to leave the Panasonic running overnight on minimum temperature (16C) to prevent our thermal mass getting too cold.  Even running flat out, the air con isn’t a big energy user, drawing only 0.8kW.

Next largest load is hot water.

At 21% of the energy “pie”, hot water is the next biggest energy user in the average Australian home.

A Sanden heat pump hot water system meets our needs.  I’ve set the inbuilt timer for an operating window between 10am and 3pm.  During this time, the solar panels and battery supply 2-3 kWh to reheat the 300L storage tank.

As for the rest …

For all the other electrical appliances in our home, we minimise consumption with a combination of efficient devices (eg LED lights) and conservation (eg not leaving lights on).

Cooking is often a big energy user but we minimise the demand by using an efficient Asko induction cooktop.

Watching the electricity demand when using the induction cooktop helped to explain something that was bugging me.  Why were we still importing electricity when the battery and/or solar panels exceeded the load? Eagle-eyed readers can see an example of production higher than consumption on July 22.  However, despite this, the red bar shows some electricity coming in from the grid.

I suspect the reason is the inverter isn’t quick enough to cope with sudden, significant changes in electricity demand.  When a device like the induction cooktop switches on, grid power is the first responder. A short time later, the inverter brings in solar or battery power.  Hence, over a day, there might be up to 1 kWh of “catch-up” electricity importing going on.

Perhaps inverter manufacturers will find ways to improve their device response times.  Possibly having an integrated battery and inverter, rather than a SolarEdge inverter and LGChem battery, would make a difference.

For the moment, a background trickle of importing is a small price to pay for a stable electricity supply.

What did I learn from winter solar?

I learned that, as expected, we need a grid connection during the Winter months.  Nothing new and exciting there.

Something unexpected was the background trickle of electricity importing due to a lag in the system’s response.  That was educational.

The most exciting thing I learned was that the SolarEdge inverter comes with an instruction manual.  Manuals are often overlooked but they do contain useful information. This manual didn’t let me down.  I discovered a section explaining how to program the inverter with different operating modes. Now we’re talking about being more than just a passive user or exporter of electricity.  I’ll explain the games you can play with a battery in a later blog.