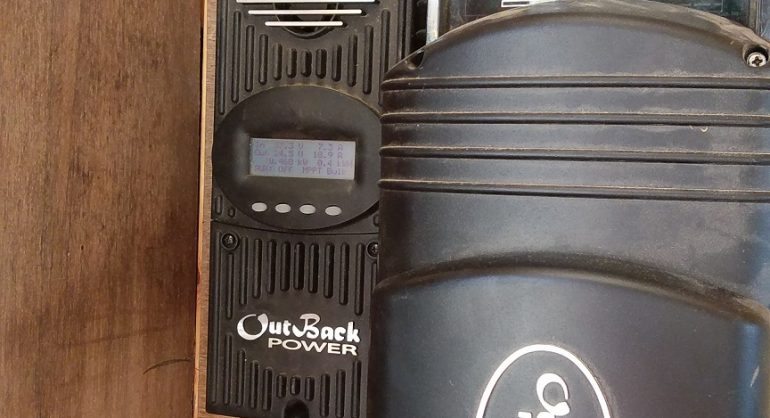 Offgrid power system is back

While building Unit 1, the team ran a successful experiment with meeting electricity requirements from an offgrid power system. Unfortunately, the system was taken apart when the old carport was dismantled to make way for Unit 2 foundations.

Last week, the electricians set up the panels and batteries again.  They took a few hours to put all the components into position at the garden shed, then reconnected the kit.  With a flick of a switch, the system was back in action and charging the batteries.

Delays in getting a connection to the electrical grid originally prompted the idea of using an alternative power system for the worksite.

Offgrid is another way of saying stand-alone power station.  We installed four solar panels on the carport roof. During daylight hours, the charger receives electricity generated by the panels and sends it to the batteries. Electrical circuits connected to the system take 240V AC from the inverter.  Voila, a solar powered worksite!

There is no connection to the wires supplying electricity to the rest of the community.  If the sun isn’t shining and the batteries are flat, then we couldn’t power any electrical devices.  The nail gun air compressor and circular saws fall silent. Everyone sits around waiting for the sun to reappear.

With a peak generating capacity of 1.2 kW and up to 4.8 kWh of battery storage, we felt the risk of running out of electricity from the offgrid system was very low.

Experience proved us correct and everything went according to plan (almost).  There was just one day in the construction process when David hired a back-up generator.  This was the second day of concrete polishing. Everything ran perfectly for the first day but it was cloudy weather so non-stop polishing used up most of the battery capacity.  With another cloudy day forecast, David couldn’t take the risk of the polisher “grinding to a halt” so he hired a generator for the day.

Having a garden shed at the back of the property is an ideal location for relocating the offgrid system to power Units 2 and 3 construction.

The four panels fit perfectly on the angled, north-facing roof.  We aren’t using a support structure to increase the panel’s angle and maximise electricity production.  Extra costs weren’t justified because a similar “low angle” arrangement on the carport roof produced enough electricity. Fortunately, the angle on the roof is enough to allow rainwater to run off the panels.

Fixing the Outback Power charger and inverter to the back wall of the shed was next.

Finally the batteries are tucked away neatly under the bench-top reclaimed from the kitchen in the old house.

Next day, the bright sunshine fully charged the batteries in a couple of hours. The system is ready to power the site.

The offgrid system has a useful life well beyond powering our house construction.

Once the build finishes, the system powers our proposed rainwater supply to the garden, toilets and laundry in Unit 3. However, this might not be a direct connection.  With a bit of plumbing wizardry, we’d like to gravity feed rainwater to the house. The pump transfers water collected from the house and shed roofs to an elevated tank on the other side of the garden.  With that tank high enough off the ground, there shouldn’t be a problem getting enough water pressure for the toilets and washing machine.

I’ll also be using electricity in the workshop planned for the shed. My son, Ben, has recent experience with creating a workshop of his own so he’s helping me do the job properly.  Who knows what woodworking projects will be going on with a well-organised space and the proper tools?  I promised Libby there is a good chance she’ll see right angles in the finished products.

Are there other building sites that could use an offgrid system to power construction tools?

Could a builder move their power system from site to site as part of their toolkit?

Should owners consider investing in panels and batteries to power the site and then perform a useful, long term function?

Something to ponder while thinking of ways to reduce the carbon footprint of house construction.