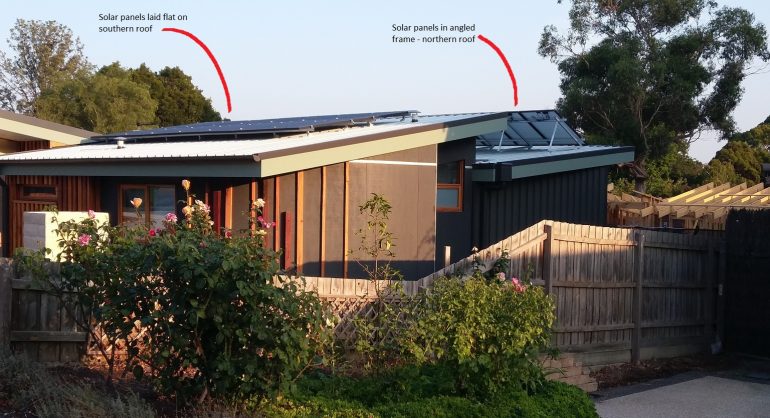 What a dramatic difference between summer solar and winter solar operation!  The sun is higher in the sky. There are more daylight hours. Time to make the most from the 7.8kW of solar panels on our roof.

How things have changed.  Unlike the winter map, solar exposure in Victoria and the Northern Territory now look eerily similar.

All that extra solar energy means our panels can get on with the job of making electricity.  Total production for December was 931 kWh or an average of 30 kWh per day. That’s a huge jump from the measly 364 kWh produced in July.

Exporting excess electricity to the grid.

Summer solar conditions mean the rooftop panels produce more electricity than we need so we pumped a 562 kWh excess into the grid.  I hope these “green” electrons backed out ones from generators burning brown coal.

PowerShop paid a handy $73 for our contribution.

Strange as it may seem, a chunk of our solar power export happened in the wee, small hours of the morning.  Yes, that’s correct, solar energy was going into the grid at 4am. How does that happen?

SolarEdge StoreEdge inverters are programmable with several inbuilt inverter+ battery operating profiles.  The standard profile is maximum self consumption. Electricity from the solar panels first goes towards meeting household needs, then to filling the battery.  Once the battery is full, excess electricity is exported. Obviously, at night, maximising self consumption means running down the battery to supply electricity for our home.

I noticed we don’t take much electricity from the 9.8 kWh LG Chem battery during summer nights.  Cooking takes a chunk but there aren’t usually any other large consumers. Air conditioning is rarely used because passive solar design and natural ventilation tend to keep the house at a comfortable temperature.  There might be a ceiling fan running for a while or, after a few really hot days, our small reverse cycle air conditioner runs for a couple of hours.

Training the battery to export at night.

Without a big demand the battery level doesn’t fall much overnight.  Hmm, is that the sound of opportunity knocking?

SolarEdge instructions in one hand and keyboard in the other, I changed the profile.  Early in the morning, the battery exports for a set period of time. After a couple of experiments, I found the optimum duration.  This ensures sufficient power left in the battery so it isn’t flat before solar production starts again after sunrise. If the weather forecast is for cloudy days, I switch back to the standard profile (maximum self-consumption) to keep the battery charged and prevent unnecessary importing during the day.

Note to self – investigate doing the reverse next winter.  I wonder if it would be worthwhile importing GreenPower during off peak hours to top up the battery?  That would avoid paying peak rate prices for imported electricity during the day when solar production is low.

How good are those solar panels on the southern roof during Summer?  Well, Scotty, that’s a great question.

Laying solar panels on a south-facing, 10 degree pitched roof works a treat when the Sun is high in the sky.

Production figures for the first half of December show the south facing panels do noticeably better than the angled array on the northern roof.  Like tourists baking on an Aussie beach, the southern panels lie flat on their backs absorbing the rays of the summer Sun.

There’s a drop in performance in the middle of the year when the Sun is lower in the sky.  Looking at production since May 2019 shows the southern array is 20% lower than the northern. However, the system hasn’t operated for a full year so the actual difference won’t be known for a few months.

Let’s review the numbers from a December day.

Consumption-wise (red) it was a quiet day.  Various household loads, such as the fridge and freezer, ticked away with the hot water system kicking in during the middle of the day.

The action is all on the production side (green).  The Sun comes up and the solar panels respond with production smoothly climbing towards 5 kW.  I wouldn’t expect the number to go higher than our export limit of 5 kW unless there was a significant household consumer.  Theoretically, we could go to 7.8 kW production from the panels if the house was taking 2.8 kW while we exported 5 kW.

The shape of the graph surprised me.  Why isn’t it bumping along the 5 kW limit for most of the middle of the day?  Welcome to the world of high grid voltage. More details on that issue in a later post.  Essentially, the local grid runs at 253+ V on sunny days when households are exporting lots of solar power.  My inverter trips offline and self-regulates to avoid raising the voltage even higher as it tries to push more energy into the grid.  Bad things can happen to electrical devices if the grid voltage gets too far above the nominal 230V value.

The net result of all this grid entry competition is a choppy line well under the 5 kW limit.  Rest assured, I’m talking with the distributor to find out what can be done. They’re obliged to keep grid voltages below 253V.

Still importing electricity from the grid.

Despite summer solar conditions producing plenty of electricity from the panels, we imported an average of just under 2 kWh per day in December.

However, to put that into context, look back to December last year, before the panels were installed.  Back then, it took 9.3 kWh per day to keep our all-electric home ticking over.

We paid approximately $50 for GreenPower imports in December.  Around $35 of the bill pays for the cable between our house and the street.  That leaves us with the princely sum of $15 for imported electricity. Given PowerShop paid $73 for exports, I’d say we came out ahead, even including the connection fee.

It’s unlikely we will ever push our electricity imports much below 1 kWh per day.  There is always a slight delay between a load increase (eg turning on the induction cooktop) and the inverter response.  To ensure uninterrupted supply, the inverter immediately imports grid power. Over a few seconds, importing goes back to zero as the solar panels or battery take up the load.

That being said, there are a few tricks we’ve learned to keep importing as low as possible.

Summer solar taught me to move as much power consumption as possible to daylight hours.  Fresh is best for food and solar power.

The hot water system heat pump is programmed to run between 10am and 3pm to take its energy directly from the sun.  There’s something satisfying about using a small amount of solar power to extract renewable energy from the atmosphere to heat our water.

The same goes for our biggest single power consumer – the 24 kWh battery in Lib’s Nissan LEAF.

Our new approach to charging the LEAF is to make hay while the Sun shines.

On a sunny summer day, there’s plenty of solar power on tap.  We don’t wait for the battery to discharge completely before plugging in. The LEAF might be on the charging system a couple of times in the same day as we drive back and forth.

Importing spikes on the December chart were caused by a long nighttime excursion followed by needing to have the car charged for a morning trip.  In this situation, we have to charge at night.

Thanks to a new tariff recently introduced by PowerShop, that’s not an expensive exercise.  The ultra-low off-peak EV tariff of 11.05 c/kWh is available to customers with an electric vehicle for any electricity consumed between 12 and 4am.

Oh, the things you can do with a programmable inverter and the EV electricity tariff.

Here’s an example of charging the LEAF after a night out when it was needed first thing next morning.  Between midnight and 4am, put the battery on standby and charge the car with imported EV tariff GreenPower. For the next couple of hours, the battery exports to help defray the cost of importing.  Seems a bit strange, but I feel better avoiding the energy losses when transferring from one battery to another.

Later that day, the car is back on the charger and soaking up solar power.  On this particular day, we used 10 kWh of GreenPower to partially charge the car and then finished the job with solar.

What did I learn from summer solar?

If it uses electricity and can be operated during the day, do it then.

Programming the SolarEdge inverter gives me options beyond the standard export during the day and import at night.  I’m on my way to developing a manual equivalent of the Reposit smart system.

High grid voltage spoils some of the fun.  I’ll report back when I have a resolution.  In the meantime, the family will have to put up with me grumbling about the lost opportunity for more “green electrons” getting into the grid.