Back to the dark ages …

“What do you mean they don’t have a range of electricity tariffs for different times of the day? Isn’t that the equivalent of the Dark Ages for electricity supply?”  I had just found out that the power supply company for this part of Melbourne didn’t offer a range of prices for peak, off-peak and shoulder.  My naive assumption was that everyone was able to time shift some of their electricity demand to take advantage of lower prices.

It had all started a few days earlier when Powershop connected us to the grid after the property officially became ours.  We didn’t have any plans on using a great deal of electricity, but wanted to make sure there would be some on tap for doing odd jobs around the house. 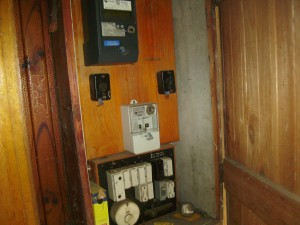 meter box during an earlier site visit.  The smart meter looked out of place amongst the old fuses and snail bait box.  Perhaps this should have alerted me to the possibility of a surprise or two at a later date.

The big surprise arrived when I checked how much electricity that was going on our bill.  Powershop has a smart phone app that is my current technology addiction.  One of the neat features is a daily consumption chart which means I can easily track what’s going on, almost in real time.  My eyebrows shot skywards when I saw that our unoccupied house consumed 12 kWh of electricity on the first day of our ownership.  We hadn’t been anywhere near it and already this house had used the same amount of power we use in nearly 2 days at our current home.  Fortunately, consumption then dropped, down to 5 or so kWh.

A trip to the house confirmed my suspicions.  The electric hot water system was switched on and happily heating water.  Not anymore!  That unit is offline until further notice.  I took the opportunity to flick the main switch on a few other circuits as well.  It wasn’t clear what these circuits did, but the lights still worked so that was enough for me.

It was another feature of the Powershop app that alerted me to the archaic tariff system.  It’s a fixed price charge for all electricity, apart from the hot water system which is billed as off-peak.  I’m assuming this means it only operates late at night when the off-peak tariff cuts in.  What’s the story with a flat rate for electricity?  A phone call to the folk at Powershop indicated there is nothing that can be done until the supplier changes the way they bill for electricity.   Fingers crossed that won’t be too far away as I’d really prefer to charge our Nissan LEAF in the wee small hours and only be billed at the off-peak rate.  Mmm, if somehow the EV charging circuit was somehow connected to the hot water system power supply …

Note to self – factor this supply arrangement into the calculations for going off-grid with the green home design.