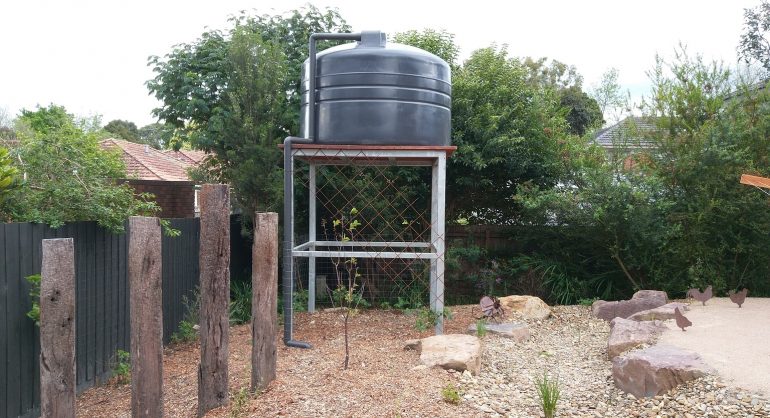 Way back in 2014, we listed ideas for a sustainable home design.  Libby suggested a gravity feed rainwater system to supply the toilets and laundry for 23B.  Instead of using electricity for pumping water to meet these needs, couldn’t gravity work for us?

Yes, gravity can do the job.  However, given that Libby herself now refers to the system as “Libby’s folly”, I wouldn’t recommend others be as brave and bold with their rainwater system.  We didn’t hit the original target with this one.

Gravity feed from a tank on a stand.

A gravity feed rainwater system is a simple concept.  Put the water tank on a stand and let nature take its course.

When flushing a toilet, the cistern inlet valve opens and the rainwater flows downhill to fill the cistern.  No pumping so no electricity required.

Now it’s time for a bit of Science.  This is the bit we didn’t think too much about until late in the design process.  First, the water level in the rainwater tank must be a certain height above the inlet valve on the toilet or washing machine.  Too low and there isn’t enough pressure (head) to open the valve.  Next, the top of the tank has to be below the gutters so rainwater drains easily into the tank.

Guess what?  After testing, our plumber discovered the minimum water level was above the gutter height.

By this time, we’d committed to a 5 kilolitre rainwater tank sitting on a stand to gravity feed the toilets and laundry.  No turning back because we’d already invested in the piping infrastructure.  We forged ahead and overcame the problem by adding a small pump to get rainwater up into the tank.  Not quite the original idea …

Getting the tank onto the stand.

A white PVC pipe sticking out of the ground marks the spot where the gravity feed tank goes.  It’s in a corner of the garden, nestled into the trees growing along the back fence.

The tank stand arrived first.  Getting a large steel structure on site wasn’t easy.  It’s lucky Joan is a good neighbour.  She allowed the delivery truck to back down her driveway next to our shared fence.

The truck’s crane lifted the stand over without damaging the new fence or hitting our house.  All good, but the stand was left upside down and a fair distance from the foundations.

I don’t know how David’s crew managed to get the stand into the correct position and alignment.  They said, “That’s where the magic happens.”  I suspect it was a combination of leverage and brute force.

The plumbers were equally secretive about how they lifted the water tank onto the stand.  We went out to do our grocery shopping and returned to find the tank in position.  More magic!

Ideally we wanted a corrugated iron tank which matched the recycled steel cladding on the north wall of 23B.  Cost knocked that idea on the head because a steel tank costs twice as much as a plastic one.

Once the plumbers finished connecting their pipes, David couldn’t resist the temptation to add a decorative feature.  He asked his apprentice, Corey, for ideas on creating something interesting with leftover concrete mesh reinforcing.  Here’s what Corey came up with – two diagonals of mesh running up the side of the stand.  Nice one!

With so much going on during building, it’s possible one trade can “bump into” something installed by another.  The underground piping for the rainwater system is a good example.

Early in the 23B build, rainwater falling on the roof came out the end of the collection pipe.  In the last few weeks of construction I discovered it wasn’t anymore.  Where was the water going instead?  Oh no, we had a leak in the underground piping!  What had changed?  It took a while, but the plumbers found a couple of issues, including a leak caused by excavations for the rear deck.  A bit of plumbing surgery fixed the problem.

Let’s follow the rainwater to find out how it ends up in the big tank without relying on gravity to do the work.

All the rain falling on our roof is collected and piped underground to the garden shed at the back of the property.

We use a “charged system” to get rainwater into a 2 kilolitre tank tucked away at the side of the shed. Charged is another way of saying a sealed system which is always filled with water up to the tank inlet. This means the gutter downpipes have the same water level inside. When it rains, there is an instantaneous flow into the tank because the pipes are water filled.

Once a day, I use a TotalFlo pump to transfer water from this tank to the 5 kilolitre tank on the stand.  The pump uses electricity from the shed’s offgrid solar power system.  I’m using sunlight as my energy source.  The piping is a bit more complicated since the plumbers added flow options.  For example, I can send mains water to the 5kL tank if we ever run out of rainwater.

A float valve controls water flow to the tank.  Once the level is high enough, the valve shuts off and then the pump stops.

What’s the answer to the obvious question, “Does it work?”  Yes, it does.  There is enough pressure in the system to slowly refill toilet cisterns and supply the washing machine.

Side benefit of a tank stand.

Although the gravity feed system doesn’t quite measure up to Libby’s original vision, we quickly noted one advantage for a tank on a stand versus sitting on the ground.

Hoisting a water tank into the air opens up more gardening space underneath.  We didn’t lose a significant patch of ground.  Also, a tank stand is the perfect structure to support climbing plants.  What could be better for growing loganberry and raspberry plants?

Adding wire mesh to the base gives the young plants something to hang onto as they grow.  Libby is looking forward to future harvests as a source of tasty fruit for making jam.

Looking back, we should have done something more conventional for a lower cost.

However, where’s the fun in that?

Now we have a unique landscaping feature consisting of a rainwater tank stand and a productive berry farmlet.  It’s not something visitors expect when they look into the back garden.