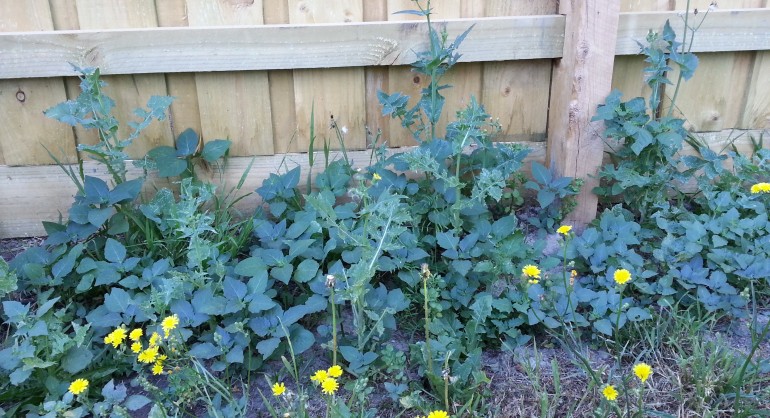 The weed war began with a nudge from serendipity.  I had been thinking about attacking the weeds that were gradually taking over the bare patch near the back fence.  However, a series of fortunate events conspired to kick start the campaign.

An amazing sequence of events leads to the start of the weed war.

If Adam from Cutting Edge Tree Services hadn’t visited to give a quote for removing the ivy-infested tree, then I wouldn’t have built a ramp to allow trucks easy access to our back garden.

If I hadn’t been working on removing the rocks around the edge of the front garden, then I wouldn’t have been able to find materials to build a ramp. 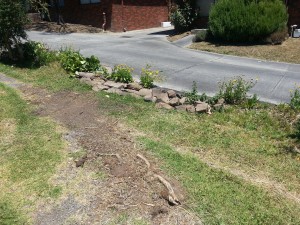 If I hadn’t gone out to get prices on materials to build support beams for the recycled timber delivery due in January, then I wouldn’t have been on the road that morning.

If Jan hadn’t suggested that I visit Mitre 10 to get a cost comparison, then my shopping expedition wouldn’t have taken as long.

If I hadn’t discovered a short cut through the back streets to our place, then I wouldn’t have come home that way.

But the events slotted neatly into place.

I drove past the Free Mulch sign within 5 minutes of Jim’s Tree Services putting it on the footpath.  They had a truck load of mulched hedge looking for a place to go.  No sooner had I asked about the mulch, than we were in the truck heading back to the house to make a delivery.  They were certainly keen to get rid of it. 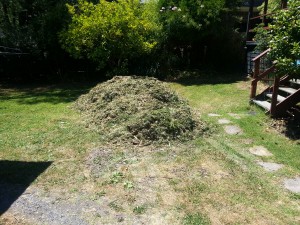 Time for the weed war to begin.

Having a pile of mulch, and the time to spread it, meant I could now do something about those pesky weeds.  Mulch is a good way to prepare the area for indigenous seedlings and to control weeds.  Longer term, the mulch will insulate the soil, keeping it cooler in summer and reducing water evaporation. 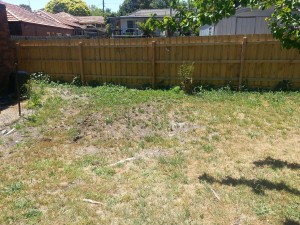 I started by removing any flowering weeds which I thought might spread seeds or have strong root systems.  A THICK layer of mulch was then put on top of the soil and remaining grass plants.  Since we’d previously removed a chook shed from this location, it was no surprise to find a variety of scrap items (broken beer bottles, garden tools, wire mesh, …) that had to be recycled or binned. 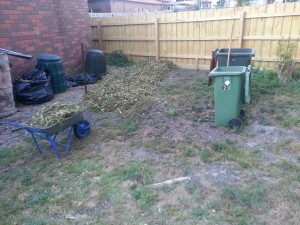 Why so deep for the mulch?  I figure that any unwanted plants that manage to grow through will be so tired by the time they see the light of day, they are easy pickings for me.

Load by load, the pile shrunk.  I knew we had a large back garden, but didn’t appreciate how large until I had to trudge up and down with the wheelbarrow. 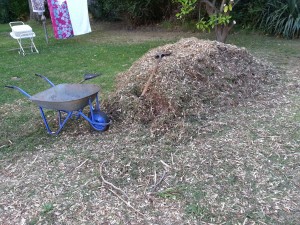 Finally, the job was done.  The pile of mulch had disappeared from near the grapefruit tree and reappeared as a thick carpet near the back fence. 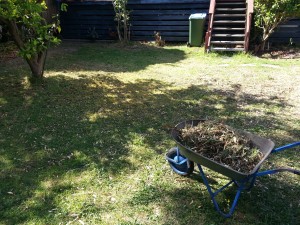 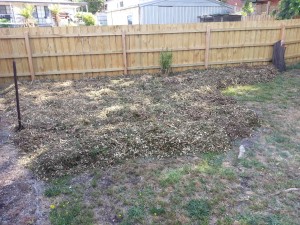 My contact at Jim’s Trees said he will keep me in mind when he has a load of mulch from local jobs.  All going well, I should be able to get more freebies to use as I continue the weed war.

Another source of mulch will be from imminent removal of the “ivy tree”.   Stay tuned for what’s going to happen to the over-mature, ivy-infested, 17m tall Ash. 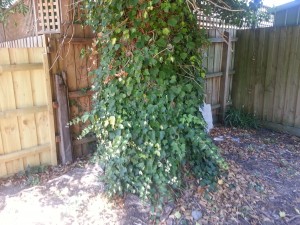